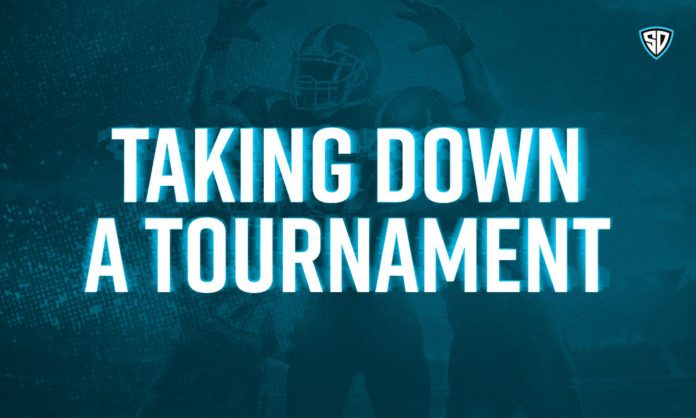 One of the greatest things about SuperDraft vs. the other DFS sites is that you actually have a chance to take down our biggest contests. Our waters are not infested by sharks so you will be able to keep afloat and find yourself with thousands of more dollars to your name when you get out of the SuperDraft ocean. However, there are some crucial keys to taking down one of these contests and I am more than happy to share them with you!

In many aspects of life, separating yourself from the pack by containing something that no one else has is bound to lead you to success. The concept is basically the same here on SuperDraft as finding that one player that goes off that almost no one else has will separate your lineup from everyone else’s. Just take a look at this first place NBA lineup as an example:

What separated this player in order to take down this tournament for a $10,000 prize was the faith in Kemba Walker, Chris Paul and Clint Capela. Walker was only owned by 9.7% of the players and scored 84.86 FP and Chris Paul was only 7.3% owned but scored 78.98 FP. Capela was 8.2% owned and scored 80.28 FP. This SuperDraft player was able to identify three players that could go off and not be high-owned at the same time. This was the difference for them to become $10,000 richer.

Another lesson you can learn here is the low-owned player is not always going to be the no-name player only die-hard fans know. Players like Chris Paul and Kemba Walker who have both been all-stars can be the ones to provide this edge as well.

This is a bit of a turn from the first key that we went over. While it is important to separate yourself by drafting players that are low-owned, you cannot do this for all of your slots. The probability of having all low-owned plays be hits is not high enough. You need to identify the player who is bound to put up numbers so crazy that if you do not have him in your lineup you have a very low chance of taking down the tournament. In the screenshot above, one of those players is in that lineup and it is pretty easy to identify who it is.

This player is Joel Embiid who went OFF against the Chicago Bulls scoring 111.26 FP at a multiplier of 1.15X. The number that really jumps off the page is the fact he was 75.7% owned. Almost everyone knew Embiid was going to fill the stat sheet that night. With the year he is having combined with facing the Bulls, it was easy to identify that. The key for you is to see that as well. While Embiid is not going to be the guy that wins you the tournament, he is the reason you are in the hunt in the first place. Star-level chalk players are a crucial ingredient to making the winning lineup in SuperDraft tournaments.

3. Find the balance between the chalk and value

Our example in the screenshot executed this strategy to perfection. This player got the stud to give them a chance to win in Embiid and then got Walker, Paul, and Capela to take the lineup over the top to win $10,000. That is the simple key. You are not going to win with all value plays and you are not going to win with all-stars who everyone can see will put up big stats. The combination of the two is what makes you money on SuperDraft.