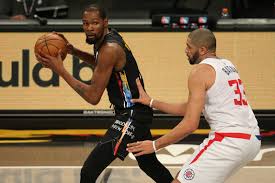 Some of the top players of all time have been forwards. Guys like Karl Malone, KG, Duncan, Chuck, and probably the most iconic athlete of all time, Rodman. Today,  some of the greatest players of our generation are forwards. Such impact players can make a huge difference in your daily fantasy lineups. Here are the best NBA forwards for fantasy basketball this season.

A tenured veteran, the 11-time all-star, former MVP, and NBA champion is entering his second year with the Nets. It goes without saying, but this guy is a flat-out hooper. Throughout his career, he has averaged 27 points, 7.1 rebounds, 4.2 assists, with a 49.4% FG. With Kyrie’s status in question, we will see KD taking over. Even his career averages are an exceptional fantasy stat line, but without Kyrie, expect even better.

Entering his 9th season in the NBA, full time with the Bucks. The back-to-back MVP in 19 & 20, Giannis has become a force in the NBA. A 5x all-star, 2 time MVP, Finals MVP, and NBA Champion, Giannis has impressive career numbers. Averaging 20.9 points, 9.1 rebounds, 4.5 assists, 1.2 steals, and 1.3 blocks. The Bucks rely heavily on Giannis and his playmaking abilities making him an excellent fantasy selection. If he can improve his free throw shooting percentage, you can expect even better fantasy numbers.

The former #1 overall pick is in his 3rd year. An abbreviated first season hinders his stats and undersells his talent. A ridiculously explosive athlete, heavy and a force, Zion is an impact player. He’s averaged 25.7 points, 7 rebounds, and 3.2 assists. His upside negates his non-existent three-point numbers. Keep him in your everyday lineups. When playing, he’s going to succeed for you.

We’re not here to start a G.O.A.T. conversation. There’s no argument. Lebron is ONE OF the best players in the league today. He is a scorer, a facilitator, a leader, and a defender. He will rack up points on both sides of the ball and there are no questions asked. Over a 19 year career, he has averaged 27 points, 7.4 rebounds, 7.4 assists, 1.6 steals, .7 blocks, and a 50.4% FG. If you want a consistent fantasy point scorer, then Lebron is a can’t miss selection.

Going on his 12th season, Paul George has made a name for himself. With a career average of 20.2 points, 6.4 rebounds, 3.5 assists, and 1.7 steals, PG is tenured in the elite ranks. With Kawhi out indefinitely, he’s poised to have a huge year for the Clippers as an impact player. That impact will bleed into your SuperDraft fantasy lineups. In a good matchup, he has the skillset and tenacity to fire off massive stats resulting in HUGE fantasy numbers for your dfs lineups.