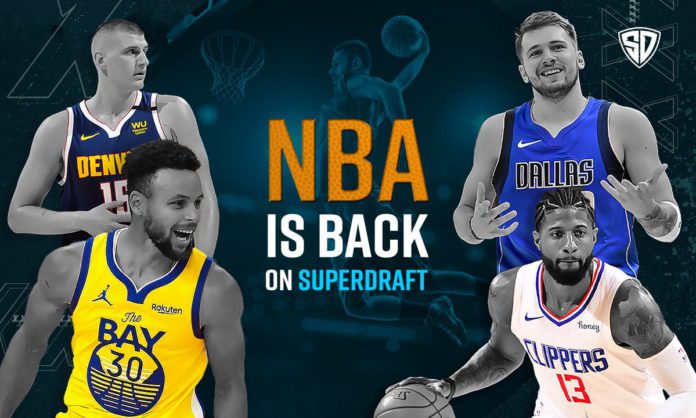 Another NBA season has rolled around, you’re hooked on SuperDraft, and want to monetize your extreme basketball knowledge. We’ve got you covered on “how to play daily fantasy basketball” tips and tricks that apply for the NBA, WNBA, and BIG3 on SuperDraft!

Whether it’s NBA, WNBA, or BIG3, daily fantasy basketball on SuperDraft is different from any other DFS site. We offer multiple game formats including standard, champion, and Super 15. Each of these formats offers their own unique challenges, all of which are fun and easy for our users to learn!

How Many Players Do I Draft In Multiplier Format?

Daily fantasy basketball on SuperDraft is a touch different than on any other platform. In our multiplier format, you select 7 players:

Your strategy is entirely up to you! There are no limitations on how to draft your team. With no salary cap, you have unlimited freedom to draft whoever you’d like as long as it falls under the 3 guards, 3 forwards, and 1 center format.

Our champion mode is slightly different. You select 4 Superflex players. Your Superflex can be anyone. They will still have their multipliers, never fear. However, daily fantasy basketball in Champion mode has a twist. You select one champion and that champion will receive a 50% scoring boost. So, if Lebron James is a 1X as a Superflex, if you draft him as your champion he will be a 1.5X

How many players do I draft in Champion mode?

In champion mode, you will select 4 Superflex players and 1 Champion for a total of 5 players. It’s a very easy way to draft a lineup. We offer single-game and multi-game formats for champion mode, so the research is minimal but the fun is maximized.

Super15 is well known social media meme, but for daily fantasy sports! There are 5 rows, and each row has 5 players. There is a $5 row, $4 row, $3 row, $2 row, and a $1 row. You have $15 and you draft the team you think will win! Players accrue points the same as our champion mode and standard mode, however, there are NO MULTIPLIERS IN SUPER 15 FORMATS. Your freedom again, nearly endless. All you have to do is select 5 players to make a full lineup and send it, no questions asked!

How many players do I draft in Super 15?

In Super 15 mode, you draft 5 players that you think will score the best. There’s no need to utilize all $15 dollars, if you select one $5 player, and four $1 players and are confident in that lineup, fire it out! You simply select the 5 best players you feel are listed on the “grid” and as long as they cost a total of $15 or less, then you’re good to go!

For daily fantasy basketball, no matter what format you are playing on, players are scored on the above criteria. By multiplying their total points by their multiplier (if champion or standard mode) or their total accrued points on Super 15, you will be able to see their totals. With this scoring knowledge, you can begin to build out a strategy based on matchups for your daily fantasy basketball lineup on SuperDraft!