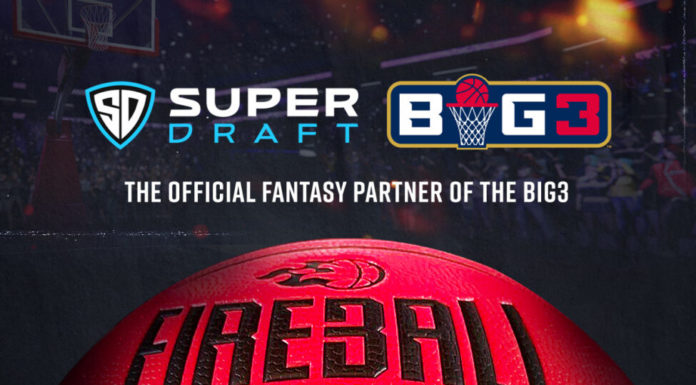 Fortunately, basketball doesn’t stop when the NBA ends. The Big 3 basketball league is your fix for all things hoops between NBA seasons.  A 3-on-3 basketball league with an exciting twist. Your favorite daily fantasy sports platform, SuperDraft, is the official partner of BIG3 basketball and we’re bringing you all of the fantasy action, news, and updates you could ask for.

What is BIG3 Basketball?

BIG3 basketball is a 3-on-3 basketball league founded by world-famous rapper/actor Ice Cube and entertainment executive Jeff Kwatinetz in 2017 and sponsored by Fireball basketballs as of the 2021 season. The league consists of twelve teams with rosters made up of both former NBA players, international players, and former college players. Names such as Dr. J, Hall-of-Famer Gary Payton, 7x NBA All-Star Joe Johnson, and 3 -Time NBA All-Team Gilbert Arenas have all participated in the BIG3 league to some degree. The league has grown since its inception and consequently has changed its format and travel schedule.

Originally, teams competed in an eight-game, eight-week regular season from late June through mid-August. Each week, a different city hosted four games in which all eight teams would compete. The four teams with the best record at the end of the regular season qualified for the semifinals.

In 2019, the league expanded to twelve teams and visited two cities each week, playing three games in each city. In 2020, like everything else, the league shut down due to COVID-19 regulations. Now, in 2021, the league played the first 3 weekends in Las Vegas, the 4th in Dallas, the 5th in Milwaukee, the 6th in Chicago, the 7th and 8th in Las Vegas, and then it’s off to the Bahamas for the playoffs and the finals!

BIG3 basketball is not sanctioned by FIBA and therefore operates under a different set of rules. Played on a half-court, BIG3 games end in a “win-by-two” once a team reaches 50. Halftime occurs as soon as one team reaches 25 with a 14-second shot clock as soon as one team touches the ball. To decide who starts the game with the ball, teams participate in a do-or-die 4-point shootout with the winner choosing to receive or defer the initial possession.

BIG3 basketball features three separate 4-point zones that are all 30 feet from the basket. To score 4 points, a player’s foot must be touching some part of the 4-point zone circle. Additionally, substitutions can be made by calling a timeout or a dead ball. Unlike any other league, there is no 3-second defense rule, forcing a player to allow 3 seconds for the defense to get set.

A new rule featured this season called “Bring the Fire” indicates that each team may challenge one foul call per half. A challenge results in an in-game one-on-one possession, with the winner’s team winning the call.

As you can see above, there are plenty of rules that differentiate the BIG3 from the NBA beyond just being a 3-on3 half-court game. BIG3 is a much faster, high-intensity game because of the shortened shot clock and shorter court. Additionally, because it’s a first-to-50 format, the games are much shorter than an NBA game.

One of the most exciting differences between the BIG3 and the NBA is that in the NBA when a foul is administered, you can challenge the call where it is reviewed on camera and subsequently ruled. In the BIG3, once per half, you are permitted to challenge a foul call by playing a “Bring The Fire” match. This is just a 1-Point 1-on-1 game between the person who was fouled, and the player that was called for a foul. This is a “ball-don’t-lie” type play and was introduced to the BIG3 in the 2021 Season.

The original change was supposed to occur during the 2020 season, but like all professional sports, the BIG3 league was canceled due to the COVID-19 concerns. The BIG3 league brings the same hoops excitement with some big-name players and basketball legends. It’s a great way to take in some basketball between NBA seasons!

How To Draft Your BIG3 Fantasy Basketball Team

When drafting your BIG3 fantasy lineup, it mirrors drafting an NBA lineup in many regards. Typically you need to look for key matchups, ex: does the Enemies style of play provide a sufficient challenge for Tri-State to guard? Additionally, you look at individual players’ stats, just like in the NBA lobbies, you have to make sure they receive sufficient minutes and opportunities to score points for you!

The first major difference between the BIG3 and the NBA is age. This year, the BIG3 lowered its minimum age to 22 years old, allowing many younger players to join the league. Players like Isaiah Austin are only 27 years old while players like Cuttino Mobley are 45!

Now, while the additional age does provide experience and wisdom, it does not make up for the fact that Austin is 7ft1in while Mobley is 6ft4in and Austin is significantly younger. On top of just being taller and younger, because the court is small, Austin will expend significantly less energy than Mobley and likely get more minutes. This is common in the BIG3 and is certainly something to factor into your lineup selection.

However, age is not the determining factor. Joe Johnson, a former NBA star, is currently 40 years old and is dominating the BIG3 day in and day out. Despite his age, he is outperforming many of the younger players. Additionally, because BIG3 basketball is played on a half-court, there is significantly less running, which is something to consider when drafting your lineup since plays like fast breaks don’t exist.

To catch all of your favorite BIG3 action, you can tune in any game day to CBS or Triller for live games. For any Daily Fantasy BIG3 competitions, the only place to play is on SuperDraft. We have BIG3 fantasy basketball competitions running every game day. With helpful strategy articles, educational pieces, and everything else you may need to get started winning money playing Daily Fantasy Sports there’s no better time to get started!