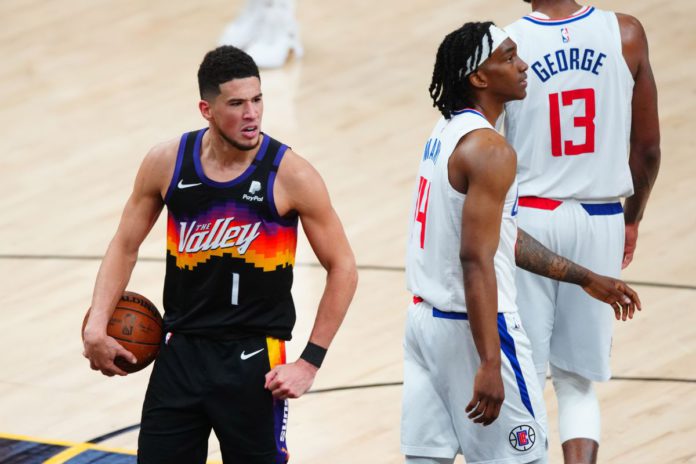 Without Chris Paul and Cameron Payne getting into foul trouble late, Devin Booker had to go full point guard mode in Game 1 vs the Clippers. He answered the bell putting up 40 points, 13 rebounds, and 11 assists asserting himself as the dominant fantasy play on Sunday. What can he do in Game 2? Our buddies at Advanced Sports Analytics have all of the top plays and projections for Game 2!

After looking at our picks, Enter our $20 multi-entry NBA Jump Shot contest with $10,000 in prizes!

Devin Booker (1x // 1.5x) – You can’t go wrong with either Booker or Paul George here and in fact you may want to roster both of them given their high usage (north of 30%), 40+ minutes played, and 20+ field goal attempts. However, if you plan on jamming in several high multiplier players in your lineups and just want one of the superstars tonight, then Booker is your guy. He is quietly becoming the best player in this postseason. Of the players competing in the conference finals, he has just as many points scored per game as Trae Young and Giannis Antetokounmpo while shooting nearly 50% from the floor, close to 40% from behind the arc, and over 90% from the charity stripe. Keep in mind that Booker gets to the free throw line often averaging 7.2 free throw attempts per game. With Chris Paul set to miss another game, expect Booker to be the shining star on the Suns tonight.

Terance Mann (2.5x // 3.75x) – Mann was the MAN on Friday night when the Clippers closed out the Jazz! He was a bit more mediocre during Game 1 which might explain why his multiplier has not changed. Still, you are getting a player with starter’s minutes who has proven that this stage is not too big for him with a multiplier typically reserved for bench players barely cracking 15 minutes played. As mentioned in previous articles, when Mann is given the opportunity to start, he will see a massive increase in minutes played, field goal attempts, and usage. There will be heavy interest in Cameron Payne and Reggie Jackson who both have done well when given the opportunity but their multipliers are nowhere close to Mann’s who could potentially earn more raw fantasy points than both of them this evening.

Marcus Morris Sr. (2.05x // 3.05x) –  Talk about inconsistency. Among the 14 playoff games Morris has played (all of which he has been a starter), half of them were below 20 fantasy points. With a multiplier of just 2.05, another subpar performance will sink your lineups. His ownership was quite high near the end of the Western Conference semifinals and might be high tonight. Let other DFS players roster him while you place more emphasis on other high multiplier options off the Clippers and Suns bench.