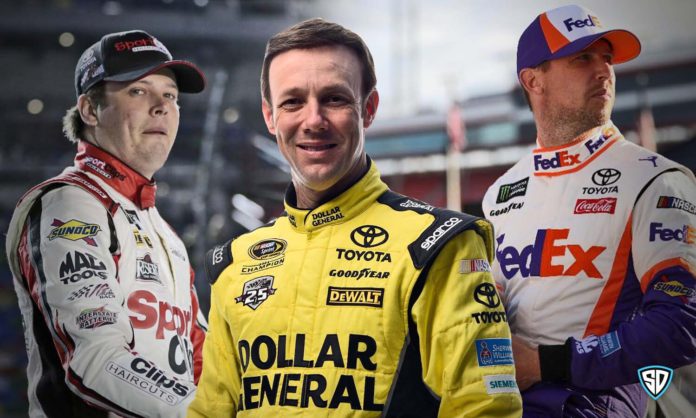 After the two races this past weekend at Pocono Raceway, the NASCAR Cup series moves to the Indianapolis Motor Speedway for the Brickyard 400 on Sunday. Kevin Harvick and Denny Hamlin both got back to their winning ways as Harvick snagged his 3rd of the year on Saturday while Hamlin took home his 4th win on Sunday. Harvick’s value remains at 1X while Hamlin’s sits at 1.05X for this week’s contests. Are either of these guys worth slotting into your lineup for Sunday?

To immediately answer that question, yes, Denny Hamlin deserves a spot in your lineup for Sunday. His 1st and 2nd place finishes this past weekend has only reinforced the point that he is one of the best racers in NASCAR. He is now 1st in wins with 4, 1st in top-five finishes with 9, 2nd in top 10 finishes with 10, and 2nd in average placing position with an average finish number of 9. In addition to that, he is also 3rd in laps led with 436. In his last eight races, he averaged 76.41 fantasy points per race and 80.23 when you factor in his multiplier. The number is not huge but it shows his level of consistency.

That level of consistency has shown itself in his past races at the Indianapolis Motor Speedway as well. In his last six races there, he has finished 6th, 3rd, 17th, 4th, 5th, and 3rd. Coming off the weekend he just had, I expect Hamlin to be in the top five again and provide solid DFS value.

If you are looking for the ultimate value racer this week, look no further than Matt Kenseth at 1.65X. While Kenseth has not been in the top 10, he has been in the top 20 in four of the last seven races and providing solid value at his high multiplier. One of the three races he placed outside of the top 20 was the Geico 500 where he finished in last due to rare “rear hub failure” in lap 127. If you discount that fluky incident, he averaged 57.32 fantasy points in his last six races, and with the 1.65X multiplier factored in, that value gets boosted up to 94.58.

What is by far the most promising piece of Kenseth’s value this weekend is his great success at Indianapolis Motor Speedway. In his last six races in Indy, he has finished 12th, 5th, 2nd, 7th, 4th, 5th. This an incredible track record for a racer that is carrying a 1.65X value into this race. While it is not a lock that he will get a top 10 finish, it is fair to expect him to bring you tremendous value at 1.65X.

The 24-year-old racer, Eric Jones, has shown great promise in the last couple of races. In the last three races, he finished 3rd in the Pocono 350, 38th in the Pocono Organics 325 due to a crash, and 5th at the Geico 500. If you take out the crash at the Organics 325, he averaged 73.55 fantasy points per event in those other two races and the value goes up to 95.62 when you factor in his 1.3X multiplier.

Jones is susceptible to crashes so there is risk involved in this pick. He has only raced at the Indianapolis Motor Speedway three times and twice he crashed out. However, the one time he didn’t was in 2018 when he finished in 2nd place. There is certainly some risk here but if Jones does not crash out he can be a home run pick for your lineup at 1.3X.