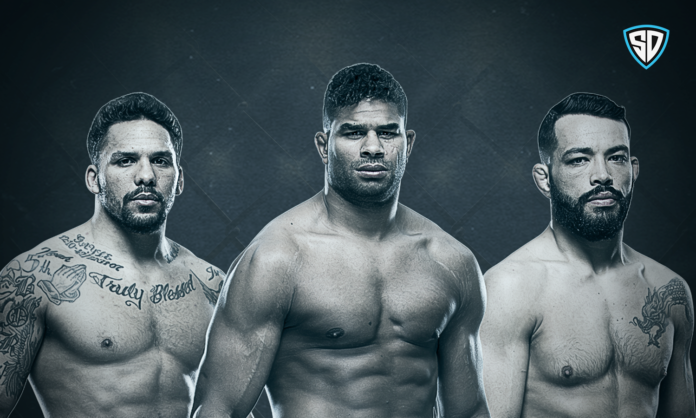 Amidst the Covid-19 pandemic, this week has been a refresher for UFC fans and DFS fans alike. UFC Fight Night Overeem vs. Harris will cap off the week as the third UFC event after the first two produced several entertaining fights. This UFC event will be the last until it returns for UFC 250 on June 6th. We have several intriguing fights to look forward to tonight with many appealing options for your team on SuperDraft! Which fighters deserve a spot in your lineup the most? Let’s break it down!

Let’s start out with the heavyweight main event featuring one of the most experienced fighters in all of UFC with Alistair Overeem. Overeem has an overall record of 45-18 which is a staggering amount of fights compared to his opponent Walt Harris who is 13-7 lifetime. While Harris is the favorite here given his advantage of speed and athleticism, there is a clear path for Overeem to win this fight and provide you with excellent value at 1.45X.

Overeem, with his tremendous amount of experience, certainly has the ability to turn this into a slower and more technical fight. This plays against the strengths of how Harris typically likes to fight. Another unfortunate factor in this fight is the tragic passing of Harris’s stepdaughter in November. This is the first time he has fought since then and it is unclear how this sad situation will impact him in the ring. Overall, the experience of Overeem here gives him a realistic shot of winning this fight by TKO and providing great value at 1.45X.

In this featherweight match, we have two fighters trending in opposite directions. We have Dan Ige who has won his last five fights with two of them ending in the first round. On the other hand, we have Edson Barboza who has dropped 4 out of his last 5 fights. He has dropped down to a featherweight as a way to try to get back on track. With momentum going in different directions, Ige is an appealing play at 1.35X.

In addition to that piece of it, is the fact that Ige has a path he can take to defeat Barboza. Barboza is the better fighter overall but if Ige can take the fight to the ground he has a real shot. Ige has a background in wrestling and he would have a clear advantage if he were able to take the fight down to the floor. With the confidence Ige has right now and the fact that he has more experience as a featherweight, I have a strong belief Ige will make this the fight he wants it to be. Do yourself a favor and snag Ige up at the 1.35X multiplier.

This feels like as even of a fight as we have on the card for tonight between these two middleweights. Both guys are coming off two straight victories after suffering three defeats in a row before that. Anders has an overall record of 13-4 and Jotko has a record of 21-4. The key difference between the two here is Anders is fighting down this match as he usually weighs in at 220. Jotko is much more used to being in the 185 range. Ultimately, the longer this goes Jotko is the one who has the advantage. However, the potential is there for Anders to be a home run pick at 1.45X.

Anders, given the fact he is used to being at 220, has a punch that contains more power. If Jotko is off his game a little bit, Anders has a chance to get an early knockout and bring big-time value to your lineup with the multiplier he is at. This pick is a little bit riskier but the potential reward is worth the risk.