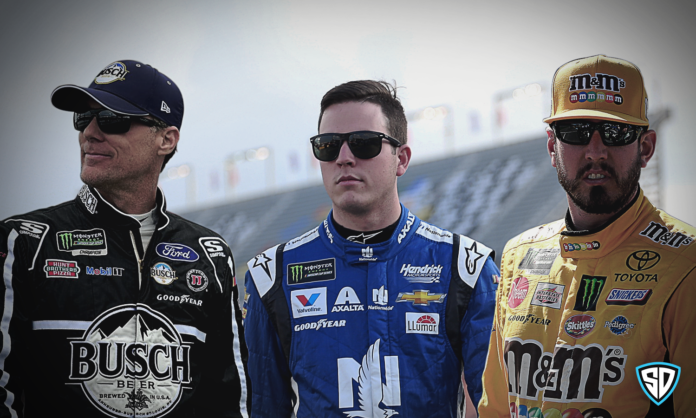 Slowly but surely, live professional sports are starting to return to their schedules and provide fans the entertainment they need during this time we are living in. First it was UFC and now NASCAR is back on Sunday for its 3rd event in the past week. The 2020 Coca-Cola 600 will be the debut of NASCAR on SuperDraft! Given it being the first time all of you will be playing NASCAR on SuperDraft, here are things to consider when filling out your lineups:

The takeaways here are that while accumulating stats with the laps are important, at the end of the day you want to be sure you have a driver who will be locked into a top-five finish. As Adam Sandler said in the movie Uncut Gems “This is how I win”. Let’s get into my top picks for the big race on Sunday!

Harvick is an absolute no-brainer pick for this coming Sunday. He has been the best racer in 2020 it has not been that close. In the six races that have completed so far in 2020, he is the only racer to finish in the top 10 in all six races. He has finished in the top 5 in 4 out of the 6 which is most for 2020 while also leading all racers in laps led at 328. The next closest is Chase Elliot at 214. His average finish number is at 4.67 and the next closest racer who has participated in all 6 races is Denny Hamlin at 8.33.

While Harvick has only won once, while Joey Logano and Hamlin each have two victories, there is no doubt that Harvick has been the most reliable and consistent guy out there. He is favorite to win this race with 4-1 odds and what makes all of this even better is his multiplier. He has a multiplier of 1.2X. This type of value is not something you see every day on SuperDraft. Do not overthink this one and immediately insert Harvick into your lineup.

When it comes to racers with high multipliers, there is not a safer bet out there to provide great value than Dibenedetto. The biggest eye-opener when it comes to Dibenedetto’s performance is the fact that he is ranked 4th among all racers in average finish who have participated in all six races. His average finish number is 11.67 with Harvick, Denny Hamlin, and Joey Logano the only racers topping him. Another number that makes Dibenedetto so appealing is the fact that he is the only racer next to Harvick and Hamlin to place top 20 in all six events. This level of consistency is excellent for someone who has a value of 1.6X. I know you are now thinking “well he probably wasn’t in contention to win any of the races”. He actually has been in relative contention as he has finished in the top five once and top ten twice. The biggest negative with Dibenedetto is he has led for 0 laps. However, with the finishing place meaning the most here, he is still a great value play at 1.6X.

Bowman is a very similar case to Dibenedetto the only difference is Bowman is more reliable. Bowman finishes right behind Dibenedetto for being 5th in average finish number at 12. However, Bowman has one win, two top 5 finishes, and two 10 finishes under his belt so far in 2020. In addition to that, Bowman is ranked 4th among all racers in laps led with 154. He only trails Harvick, Chase Elliot, and Brad Keselowski. Given all of these numbers you would figure he would be in the 1.05-1.15X multiplier range. Instead he has a fantastic multiplier value of 1.35X.

With the 2020 track record he has, it is a very safe bet to assume that he will bring you excellent value for your lineup. Bowman is also getting the betting respect as he has the 8th best odds to win the race at 12-1.

Busch has always been one of the more consistent racers in NASCAR and his recent stretch of races makes him very appealing for the Coca Cola 600. In his last four races, Busch has finished 2nd, 3rd, 26th, and 2nd. There is obviously the concerning number of finishing 26th at the Darlington 400 but aside from that, three top 3 finishes are as good as it gets. What also is promising is the fact that Busch has the 2nd best odds to win the Coca Cola 600 at 6-1 behind Kevin Harvick. With his multiplier being 1.15X, if he can land in the top three again, he will be a big-time player for your lineup.