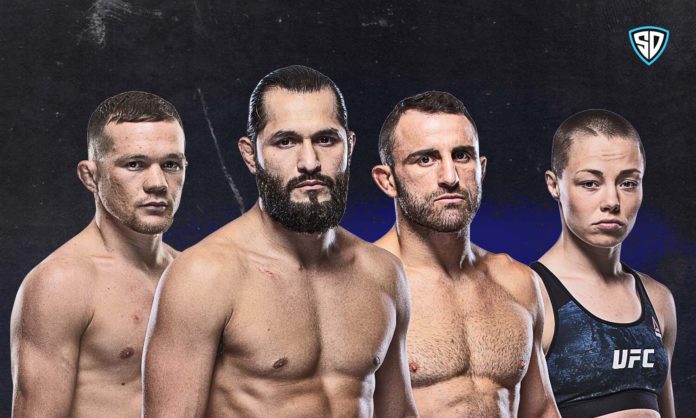 In the UFC’s first event on Fight Island in Abu Dhabi, they have given us one of the more stacked cards in recent memory with the late addition of Jorge Masvidal. In the four fights I’m going to break down we have two rematches and three title fights all of which look to be worth the price of admission.

For each of these highly anticipated fights, not only will I give you my take on how it will end, but I will also touch on the thought process of going the other way and having your lineups in mind.

This rematch has an interesting backstory as the last time both of these guys fought was against each other: a bout that, although close, Volkanovski won just about every round. He used his kicks to his advantage last time around to make Holloway uncomfortable and it took a toll on him as the fight went on.

Because this fight is so fresh in their minds and how close it was, this rematch is up for grabs. But, the one thing we didn’t really see from Volkanvski in that fight is how heavy his hands can be. Normally I would side with the fighter that lost a close fight in a rematch but Volkanovski didn’t completely empty the toolbox in their first fight. There is plenty he did not show and he has the DOG in him and can end a fight when he feels desperate.

Holloway’s big takeaway from the loss should be that he seemed to figure things out in the later rounds where he started to attack Volkanovski’s body. He started to check more leg kicks towards the end which is something that he is going to want to do earlier in this fight so he doesn’t have to fight southpaw when he doesn’t feel the need to.

As I mentioned before, he didn’t really take much power shots from Volkanovski in the last fight and it will interesting to see how he reacts to them. However, the chin on this guy is as tough as they come and he is not easily wobbled. Holloway is the better fighter in my opinion but Volkanovski excels at canceling out his opponents’ gameplan and is a tricky matchup for anyone he faces.

Fight pick: Volkanovski by TKO/KO – You don’t normally see me go against a volume puncher with the name recognition of Max Holloway but I’m banking on Volkanovski landing more power punches this time around. I don’t care how good of a chin Max has, Volkanovski can pack a punch.

SuperDraft pick: Volkanovski – I think this fight could end earlier than a lot of people expect. Holloway might feel that he has to try and pour it on early after their last bout but with Volkanovski’s defense and counters it won’t do him much good.

Both fighters are coming off of a layoff and a loss as they head into this rematch – a rematch in which Andrade came out of nowhere to get the win off of a mistake from Namajunas.

If you watched the last fight between these two it was obvious that Namajunas was in the driver’s seat from the get-go and is the much more technical fighter. Her footwork is second-to-none, she is the superior striker and her ground game is a step above as well. Her only mistake in the last fight was holding onto the kimura too long and letting Andrade lift her before she ended it with a slam. She lost it, Andrade did NOT win it.

Andrade is coming off of a first-round TKO loss to Zhang Weili to lose the Strawweight title and it was a quick one. Before that, she strung together four-straight wins that were not exactly the most convincing. There is enough tape out of Andrade to know what you’re going to see: she’s moving forward and swinging away with little-to-no technique involved. If she took advantage of her reach it would be a different story but we have never really seen it from her and when she tries to close the distance on Namajunas she will be leaving herself open to take damage on the way on.

Fight pick: Namajunas by decision – Despite losing in the first matchup, Namajunas is the favorite and for good reason. The only way she losses this fight is if she makes a mistake like she did last time out and I do not see that happening. Expect her to out-strike Andrade tenfold with a chance at a third-round submission victory.

SuperDraft pick: Namajunas – Namajunas would be my favorite for Champion if not for the addition of Masvidal to the card. She will provide volume and have a chance at an early finish bonus and at the very least will provide three full rounds of stats for your lineups.

I’ve talked before about how the UFC has the perfect formula for making fights knowing what they want the outcome to be. The UFC would love for Petr Yan to have a name like Jose Aldo on his resume to further heighten his profile within the company and I think they’re getting just what they want with this one. You aren’t just handed the rank of Master of Sport in Boxing, you have to earn it. And with that comes the experience of seeing just about anything that anybody can throw at you.

Even though Yan isn’t always throwing punches, he is always on top of you moving forward with a high guard waiting for the perfect time to strike and when he picks his spots he’s hard to beat. The pressure of yan will get to Aldo who most likely is going to come out swinging early and often leaving him wide open for an early exit in this title fight.

At this stage of his career, Jose Aldo is basically a boxer because of his hesitation to throw kicks with all of his past foot and knee injuries. Being a guy who is strictly a boxer you do not want to be across someone like Yan where you would be hard-pressed to find a better pure boxer in the sport and would feed right into his gameplan.

I would normally say that Aldo has the experience advantage in both the ring and in title fights but as I said, Yan has the rank of Master of Sport in Boxing and Aldo isn’t exactly the most conditioned fighter. However, three of the four names to beat Aldo are McGregor, Holloway and Volkanovski so it takes a lot to beat someone like him. Although Yan isn’t in that discussion yet, he is on his way there and Aldo’s second fight after a weight cut to 135 is going to make Yan look that much better.

Fight pick: Yan by KO/TKO – If Aldo was still using his leg kicks this could be different but we haven’t seen him do that in quite some time. I’m expecting the striking ability of Yan and the length of the five-round title fight to take a toll on Aldo’s cardio leaving him susceptible to an early finish.

SuperDraft pick: Yan – He will for sure outstrike Aldo in this fight with his use of both his hands and feet and I believe he will get it done by the fourth round. Aldo will be winded if he comes out looking to throw bombs too often early.

Usman will have to defend his Welterweight title against Jorge Masvidal instead of Gilbert Burns which makes Saturday’s bout a battle of styles. On one end you have Usman who has champion-caliber wrestling skills and on the other, you have Masvidal’s striking prowess. Usman has the benefit of having a few different paths to victories. Obviously he could win with his takedowns and ground game but he could really benefit from taking shots at Masvidal’s lower body to negate his power as the fight goes on.

Usman’s opponents have trouble defeating him even with a full camp but Masvidal is a different breed. All 14 of Usman’s wins came with little adversity except the Covington fight so this could be the first time he has really been tested.

Masvidal’s 2019 was arguably the most impressive year for a fighter when you combine the level of competition he faced and his finishes. In March, he KOd Darren Till, followed that up with a UFC-record five-second knockout of Ben Askren and finished his year winning the BMF title against Nate Diaz. He was supposed to be Usman’s initial challenger but is having to now fight on six-days notice. On top of that, he is at a disadvantage with having to cut weight on short notice and he did not have a traditional camp. However, he was training to help Dustin Poirier in his last fight and was able to get plenty of reps with NCAA Champion Bo Nickal.

Masvidal’s opportunity is going to come early in this fight. It plays to his style and is his best chance at getting an upset but he doesn’t HAVE to KO Usman early to win this one. If he can hurt Usman early and make him tentative as the fight goes on, he might be hesitant to shoot for his takedowns and it only takes one moment of hesitation for Masvidal to land a knockout blow.

Fight pick: Usman by decision – It’s the safe and smart pick when you consider everything. Usman has the advantage of a full camp and has dominated just about everyone he has seen in the ring and if he gets out of the second round safely it is a sure thing.

SuperDraft pick: Jorge Masvidal – I can’t ignore a fighter with Masvidal’s striking ability and early-knockout potential at 1.5X and 2.25X in the Champion spot. Masvidal’s path to victory is a risk on short notice with limited training but 100% worth the gamble as his best chance of winning is a KO in the first two rounds.