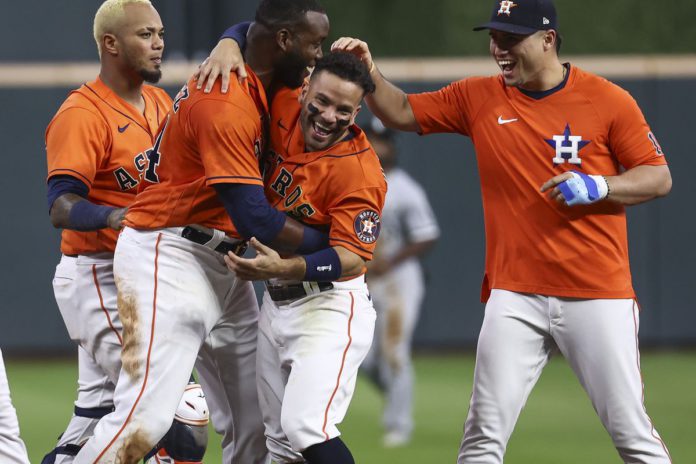 The Houston Astros have been tearing the cover off the baseball lately, winning 11 games in arrow. What do our partners from Advanced Sports Analytics think they will do tonight against the Tigers? They discuss that with the rest of their top picks for tonight’s MLB slate on SuperDraft!

The Projections are once again favoring 2x multiplier pitchers tonight. With so much value against the rest of the slate, a 2x multiplier pitcher has an incredibly high ceiling making them a worthy risk. Framber Valdez has no business being a 2x multiplier with his success so far this season, especially against a Detroit Tigers team that’s been awful. Valdez has 4 starts in the month of June all going 7 innings and less than 2 earned runs. His 4-0 record and 1.59 ERA in the month of June has been astounding. Valdez has a whiff rate of 25.6% this season, well above the 22.6% slate average.

Additionally, his barrel rate this year is only 3.3%, down from his 2-year rate of 6.1%, and a 2-year slate average of 8.4%. With all this said, Valdez is facing an undisciplined tigers line-up with an elevated whiff rate, and a low contact rate. Look for Valdez to go above his June average of 6 strike-outs and post a dominant performance against the Tigers tonight.

Skipping over a well projected Tony Gonsolin due to starter concerns, Carlos Rodon projects to be a great option tonight against a middle of the pack Mariners team. Rodon has had filthy stuff this season, his whiff rate of 30.5% is drastically above the slate average of 22.6%. Rodon also has barrel rate of 6.7%, again below slate average of 8.3%. Rodon’s strong numbers have translated in the W-L column with a 6-2 record, helping to lead the red hot White Sox’s who have been incredible on the offensive side of the ball. Rodon’s been incredible the month of June with a 1.42 ERA in 3 starts, giving up only 1 earned run in each appearance, averaging 8.7 strikeouts an appearance.

The Mariners line-up contact rate is 3% below slate average, and their line-up whiff rate is an enormous 31.8% significantly above the average of 22.2%. Look for Rodon to have a shot at double digit strikeouts tonight against a Mariners team that swings and misses often.

There’s no reason to get fancy here, the projections are all over the Astros line-up facing Wily Peralta who got absolutely shelled in his first starting appearance of the season. Peralta gave up 5 earned in 5 innings last week against the Angels. His whiff rate of 13.1% is significantly the worst on the slate tonight, and he’s going up against an Astros line-up with the highest contact rate in baseball.

The Astros have been on fire putting up double digit runs in 3 of their las 4 games. The bottom of the Astros line-up is projecting very well, as they may get the chance to see 5 or 6 at bats tonight. This game has blow-out written all over it, expect the Astros hitters to get the job done tonight.

It feel’s like Groundhog’s day with the projections consistently telling us to stay away from this Cub’s team. Even with a potentially favorable match-up against Tony Gonsolin who’s been a great starter but hasn’t gone deep innings yet, the dodger’s bullpen is not an opposition the Cub’s want to rush to face. After a few relatively strong outings in a row from the Cub’s, including a 4-1 win against the Dodgers last night, let’s wait until this series is over before we consider getting the Cub’s offense back involved in our line-ups.

Click here to join our $17 multi-entry MLB MoonShot Contest with $2,000 in guaranteed prizes!