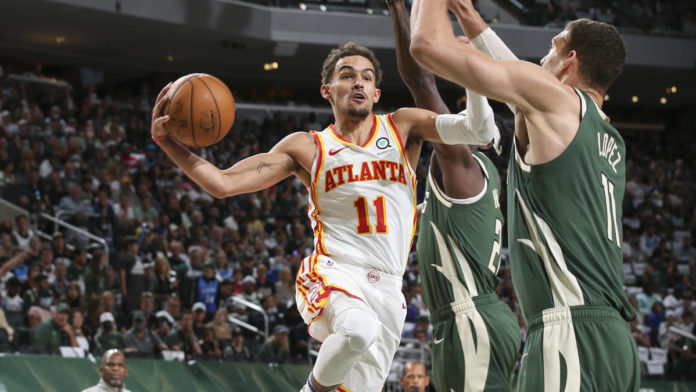 The Hawks continue to prove the doubters wrong. After pulling off the upset Game 7 win on the road in Philadelphia, they waltz into Milwaukee and take Game 1 of the East Finals. Take a look at which players our team at Advanced Sports Analytics likes for Game 2!

What an incredible run for Young so far this postseason! Young’s 48 points two nights ago in Game 1 of the Eastern Conference Finals (ECF) tied LeBron James’ record for most points scored by an NBA player at age 22 or younger in a conference finals game and Young also earned his sixth 30-point game on the road, the most in a player’s first career postseason in NBA history. So what can Young do for an encore in Game 2? While we cannot predict a 50 point night or his first triple-double this season, we can be confident that he will play a lot of minutes and shoot the ball frequently with respectable accuracy.

During the regular season, Young averaged 33.2 minutes per game while attempting 17.38 field goals. Since the postseason started in late May, Young is now playing 38.92 minutes per game with 23.5 field goal attempts. Young’s field goal and three-point percentages during the postseason are very close to his regular-season percentages. Even Young’s usage percentage is up from 32.5% to 34.93%. Young is a matchup-proof scorer who should continue to shine on the big stage.

Typically when a superstar has a big game, the complimentary players will also play well. Collins has one of the better correlation coefficients with Young at 0.33 when you compare their SuperDraft points during the postseason. In fact, they have a combined max of 117 SuperDraft points. Should Young continue to see his star rise in the ECF, expect Collins to come along for the ride.

If we throw out the second road playoff game when Young scored at least 30 points (Collins was in early foul trouble and played just 14 minutes), Collins has averaged 34.8 SuperDraft points in the five other games where Young accomplished his record-breaking 30 point scoring feat on the road. In the seven other playoff games for the Hawks, Collins is averaging 30.25 SuperDraft points. Collins seems to get more open looks and plenty of second-chance scoring opportunities when Young is popping off. Pairing Collins with Young could provide your lineups some nice differentiation from the rest of the field.

Lopez had his worst game this postseason during Game 1 of the ECF. Coincidence that he happened to play against a fierce defender in Clint Capela? I think not! Capela rates as the 2nd best center in defensive real +/- ratio. There were two other games against Atlanta during the regular season where Lopez struggled.

On 1/24/21, Lopez managed just 12 points and 3 boards. On 4/25/21, he was even worse with a paltry 11 points and 1 board. It should not be surprising that Lopez could not even crack double digits with scoring two nights ago. With the Bucks Big Three (Giannis Antetokounmpo, Khris Middleton, and Jrue Holiday) taking most of the shots and eating up tons of usage, there are not many opportunities for Lopez to do much in terms of fantasy production. Look elsewhere for high multiplier options.