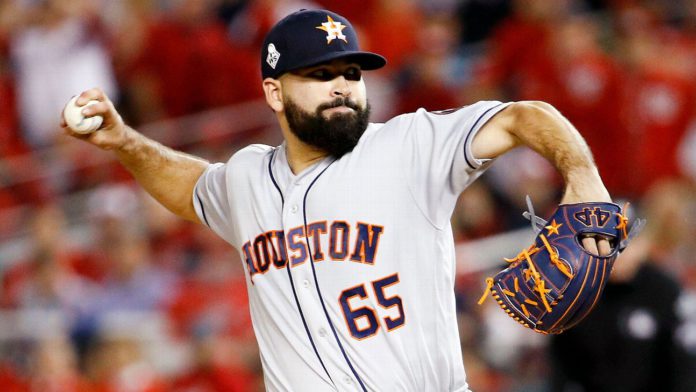 With foreign substances by pitchers being a hot topic of conversation, we’re seeing a lot of hitters hit their mid-season strides. Swings looked dialed in all across the MLB. Let’s check out what our partners at Advanced Sports Analytics have to say about today’s full slate of games!

Jose Urquidy (2x) – Urquidy poses a lot of value on tonight’s slate as one of the 3 pitchers with the 2x max multiplier. Urquidy is middle of the pack in whiff rate, 22.2% over the last few seasons. He’s had 2 quality starts in his past 3 outings registering 8 and 9 strikeouts in those two stronger performances. Urquidy has been much stronger at home this season, with a 2.83 ERA vs. his season’s 3.77 ERA. Despite facing one of the stronger MLB line-ups tonight, Urquidy provides great value, and the chance to fade consensus.

Marcus Stroman (1.65x) – Stroman has had a monster season so far, despite not filling the win column. His ERA is enough for the top 15 in the MLB and he’s been consistently delivering quality starts. Stroman is priced to offer strong value tonight with a 1.65x multiplier. He’s facing a Cub’s line-up that despite having some big names, has struggled to perform to what they are used to. The Cubs have a WBOA over 2% below the average tonight, and a contact rate of .70 vs. a slate average of .73. Look for Stroman to deliver tonight against this Cubs lineup.

The Brewers have a strong matchup tonight going up against German Marquez who struggled immensely in his last outing. German gave up 9 ER and 12 hits in 5 innings and has struggled with his command this season seeing his 2-year walk rate of 7.3% jump to 13.3% to start the season. This stack is centered around Milwaukee’s 1, 2, and 4 hitters who despite struggling batting average wise have made up for it drawing walks at a high clip and hitting for power. Avisail Garcia is leading the Brewers with 13 Home Runs and 38 RBI’s and with a 4-game weekend series at Coors Field, the best hitting park in baseball, he will surely be adding to those. Vogelbach and Urias both have power and have been making contact at high clips. They both set up to have strong series as the Brewers look to gain some room on their tie for the lead in the NL Central.

As alluded to, with the Cubs facing Stroman tonight, and their lack of strong hitting this season there’s no good reason to stack the Cubs tonight with the value presented elsewhere on the slate. Aside from Kris Bryant who’s been having a strong year at the plate, the rest of the Cubs lineup has been struggling to hit up to the reputation they built in their 2016 World Series run. Rizzo and Happ are at the very bottom of the value rankings for players tonight, along with most of the other Cubs batters. Stay away from the Cub’s stacks tonight with the tough pitching matchup, and look for value elsewhere.