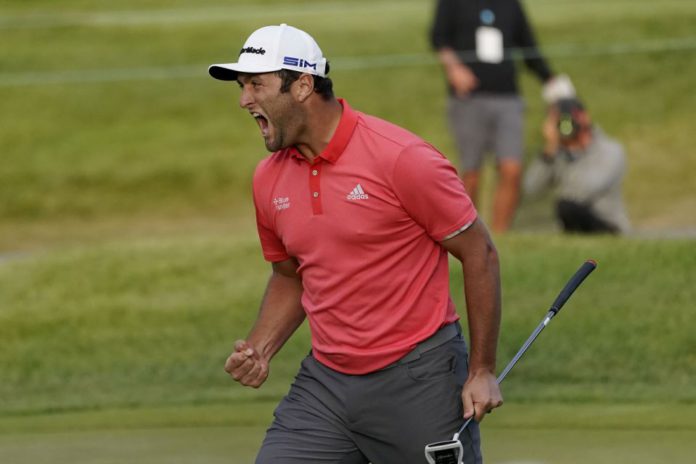 I am not sure if anything can top what we saw this past weekend at the BMW Championship. Dustin Johnson and Jon Rahm had a playoff for the ages where Johnson hit an amazing putt to force the playoff but then Rahm hit an impossible 66-foot putt to secure the victory. Moments like this make you miss having the fans in attendance as it would have made an already amazing moment, unforgettable.

Now the PGA Tour moves on to the Tour Championship where we have a very unique set up. We have a small 30 player field which will feature the FedEx starting stroke system. Based on the FedEx cup standings, each player will start at an assigned score. So based on the standings, Dustin Johnson will start at -10, Jon Rahm will start at -8, Justin Thomas will start at -7, and so on and so forth. This creates a new strategy for how you should play on SuperDraft this week.

When it comes to this format, everything is the same when it comes to scoring on SuperDraft except for one big category: the place bonus. Rahm will be starting at -8 so he already has the built in advantage to place high in this tournament. As mentioned before, only Johnson will have a bigger head start than him. On top of that, Rahm is playing as good of golf as anyone right now. He got his run started off with a victory at the Memorial Tournament. He did finish 52nd the next week at the WGC FedEx St Jude Invitational but immediately got back on track after that.

He finished 13th at the PGA Championship, 6th at the Northern Trust, and 1st this past weekend with his insane match ending putt. 2019 was the first year the Tour Championship changed to this format and he finished 12th. However in the two previous years he finished in 11th and 7th. With the way he is playing right now it will be hard to fade Rahm at 1.1X.

I know this might be boring selecting chalk picks here with Rahm and now Johnson but it is simply the best approach for this week when they have the built-in advantage. It is not just the advantage though, it also the fact that Johnson is scorching hot right now. He finished 12th at the WGC FedEx St Jude Invitational, 2nd at the PGA Championship, 1st at the Northern Trust, and 2nd at the BMW Championship. In these four tournaments, he averaged an absurd 98.8 fantasy points per tournament. Usually, you would want to stay away from a 1X but Johnson is just too good to avoid right now.

Last year in this tournament, Johnson finished in 29th out of 30 golfers and at +13. With the way he is playing right now, you can tell he is going to be motivated to right the wrong from last year. In addition to that, he has also finished in the top 6 four times in this tournament. Given his head start of -10, I would feel great picking Johnson for this week.

Rory has been in a giant funk since returning from the long layoff. He has played in eight tournaments and has not finished in the top 10 in any of them. This is after finishing in the top five in his eight tournaments before that. A truly bizarre fall for him which has his multiplier at 1.15X. However, this feels like the tournament where he finally has a shot to break out of the slump. He comes into this week fresh off finishing 12th which is a nice start but what really has me intrigued is how good he has been at the Tour Championship in previous years.

In his six appearances at the Tour Championship, he’s finished in 1st, 7th, 1st, 16th, 2nd, and 10th. This is clearly a course he is comfortable at and he definitely has a shot to be one of the best golfers on the course this week. While he is starting at a disadvantage at -3, the 1.15X multiplier and his history at the Tour Championship make up for that.