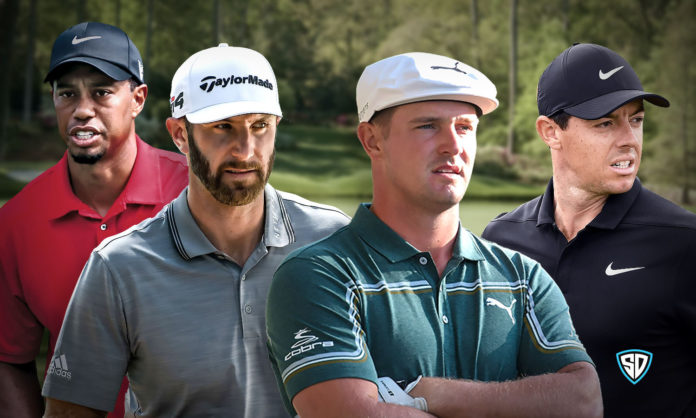 In the words of Jim Nantz, The Masters is a tradition unlike any other… until 2020 came around with a worldwide pandemic and ruined traditions of all kinds. The Masters is the most prestigious golf tournament in the world held at Augusta National in Georgia and it usually takes place in April. The Masters is now happening in November with no fans in attendance. It certainly won’t have the same feel as it usually does, but it’s still The Masters and it’s still being held in Augusta. There are so many great choices to choose from and I have narrowed it down to four players you should strongly consider.

Even though DJ has a multiplier of 1X, I find it very hard to build a lineup without him in it. He is by far the best player in the world right now and this feels like a great opportunity for him to secure his first green jacket. In his last six tournaments, he has finished 6th, 1st, 2nd, 1st, 2nd and 12th. That level of consistency towards the top of the leaderboard is exactly what you would want to see from Johnson heading into The Masters.

Even though Johnson hasn’t won, he has been knocking at the door of winning in the last four Masters he has played in. He finished 6th in 2015, 4th in 2016, 10th in 2018 and 2nd last year. He has a very good overall history with majors as well. He’s finished in the top 10 43% of the time and in 2020 he finished in 2nd at the PGA Championship and 6th at the US Open. Johnson is primed to be right in the mix on Sunday and provide solid value for your lineup.

Watson got off to a good start after the PGA Tour resumed play after the suspension due to Covid-19. He came in 7th place at the Charles Schwab Challenge and it looked like he was going to start rolling a bit. Unfortunately for Bubba, the complete opposite happened and he had a miserable stretch of golf from the end of June to the beginning of August. After the 7th place finish, he missed the cut four times and finished in 52nd, 32nd, 25th and 71st in the next eight tournaments.

Things have turned around since then as Watson finished in 18th, 16th and 31st in his next three. In his last two, he finished 7th at The CJ Cup and 4th at the Zozo Championship. This is the type of momentum you would like to see from an established player heading into The Masters. Watson has also had great success at the Masters. He won the tournament in 2012 and 2014. In the last two years, he finished 5th and 12th respectfully. Given the fact he has a multiplier of 1.2X, I think you are getting great value with Watson this week.

Aside from a couple of hiccups at the WGC-FedEx St Jude invitational and the Northern Trust, Finau has put up very good performances in every tournament since mid-July. Aside from the two aforementioned tournaments, Finau has played in eight tournaments in that time span and has finished 8th, 3rd, 4th, 5th, 17th, 8th, 11th and 24th this weekend at the Houston Open. There were two majors in that stretch as he placed 4th at the PGA Championship and 8th at the US Open.

In addition to his recent performances, his brief history playing at Augusta is very encouraging. In 2018 he finished in 10th and last year he finished in 5th. Finau is simply a great golfer in the biggest tournaments. In 17 majors, he has made the cut 14 times, the top 10 eight times, and the top five four times. With his multiplier of 1.15X, Finau is reliable enough to be a great value play at that multiplier value.

There are few golfers out there who suffered more from the long layoff caused by the pandemic than Rory Mcilroy. Before play was suspended, he was the #1 golfer in the world by a substantial margin. From the end of October in 2019 to March of 2020, he played in eight tournaments and finished in the top five in all of them. He had two wins, two 3rd place finishes, one 4th place finish and three 5th place finishes. Mcilroy fell off significantly once play resumed. In the next seven tournaments, once the PGA Tour got back underway, he finished 32nd, 41st, 11th, 32nd, 47th, 33rd, and 65th.

However, Rory has started to come around in the last five tournaments he has played in finishing 12th, 8th, 8th, 21st and 17th in that span. This is not the level of golf he was playing at the beginning of the year but it is a big step from where he was before. Mcilroy has still yet to win the green jacket but he has been in the hunt every year since 2014. Aside from his 21st place finish last year, he has finished 5th, 7th, 10th, 4th and 8th at The Masters. I don’t think Rory will be winning it this year but I think he is playing well enough right now to be in the top 10 at the end of the day on Sunday. Given the fact he is at a 1.1X multiplier, I feel very comfortable selecting him to be in my lineup.