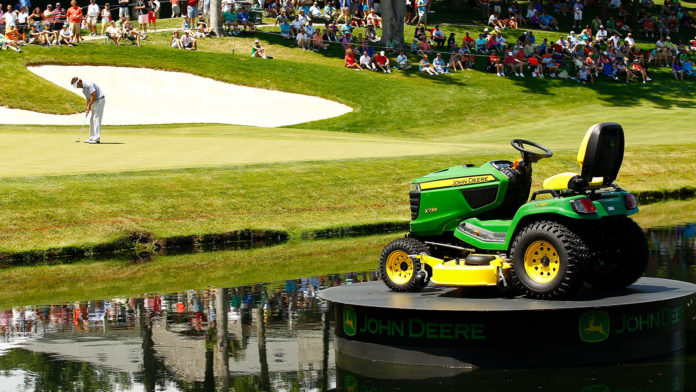 Expect an absolute birdie fest at TPC Deere Run this weekend. Over the last five John Deere Classics, we’ve seen the winner shoot 21, 27, 18, 22, and 20 strokes under par. There will be some high-multiplier golfers who make it through to the weekend, they will rack up points with the extra two rounds on the easy course, their high multipliers will result in massive scores. We want to try to hit on some of these golfers. Unlike the past two weeks where we’ve expected a ton of volatility, TPC Deere Run should reward the better golfers. In particular, golfers who gain strokes off the tee and on the putting green should really stand out from the field this weekend. Approach play can be down-weighted relative to off-the-tee, around-the-green, and putting play.

At 15-to-1, Harman has the second-best odds to win in this week’s field, yet he is priced as more of a second-tier golfer. While Harman is far from a consideration among the game’s best, he does stand out in a very weak field for the John Deere Classic. Harman is an excellent fit for TPC Deere Run, over the past 6 months he has shown great putting, around-the-green, and off-the-tee play (+0.52, +0.42, +0.34 strokes gained per round, respectively), his only area of mediocrity has been approach play, which should be expected to be down-weighted at Deere Run. Over a 4-appearance sample (dating back to 2015), Harman has had good course history at TPC Deere Run, gaining an average of 1.1 strokes per round at the tournament.

Challenger Who Could Win

Vegas has been a tricky golfer to pin down as of late. He makes cuts with a pretty high consistency – 6 straight, 11 of last 12, but he does seem to fizzle through the weekend. But with a weak field and a scorer’s paradise maybe this is one of the weekends that Vegas can breakthrough for a big finish. He’s not an ideal fit, he loses strokes on and around the green (both important traits at TPC Deere Run), but he is a pure bomber (off-the-tee play should be significantly up weighted), his +0.74 strokes gained OTT over the past 6 months is second best in this week’s field.

In his two appearances at TPC Deere Run, he’s been good but not great, +0.62 strokes gained per round. With Vegas, you’re betting on consistent (if at times underwhelming) recent form and hoping his elite ball-striking plays up in a big way to help him finish among the top 5 or so golfers, which (Las) Vegas suggests as being fairly likely given his strong 36-to-1 odds to win.

Sleeper to Take A Flyer On

These are getting kinda boring to write up each week, but Lebioda continues to pay off his high multiplier. Lebioda is one of the hottest golfers on tour right now, coming off back-to-back top 5 finishes, and 6 consecutive made cuts. At 41-to-1 to win, Lebioda is simply mispriced, the only other player with similar win odds & multiplier is 1.55x Steve Stricker, who has won the John Deere Classic multiple times (and also makes for a strong play).

It admittedly isn’t the greatest fit for Lebioda – he’s about average in his putting, around-the-green, and off-the-tee play, his stellar approach play is likely to go less rewarded than usual (and note that his recent top 5 finishes have come at courses that heavily reward approach play). But the recent form, the win odds relative to multiplier, and the eye test all seem to suggest it is another weekend to roll with Lebioda as your preferred sleeper.Conclusion

The John Deere Classis has an extremely thin field this week. It is a good opportunity to take shots on some middle-tier golfers who could put up a bunch of birdies and rise to the top of a leaderboard that will inevitably be without the names of some of the game’s best who are taking the week off. Good lineups will balance the high upside of high-multiplier golfers with missed cut risk mitigation through more reliable mid-to-upper-tier golfers.

Click here to join our $25 multi-entry PGA Long Drive Competition with $5,000 in guaranteed prizes and $1,000 to first place!