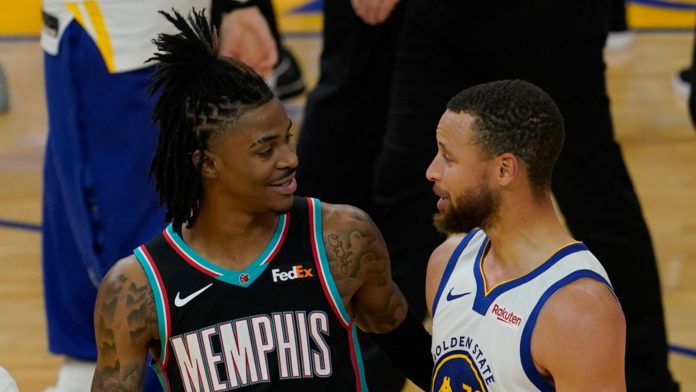 The Play-In Tournament ends tonight with either the Warriors or the Grizzlies headed to the postseason. With the Warriors are coming off a last minute loss to the defending champion Lakers, do they have enough in the tank to take on Ja Morant and the Grizzlies? Tonight’s winners get a matchup with the Utah Jazz and the losers get that post season trip to Cancun. Let’s check out tonight’s picks and projections!

Jonas Valanciunas (1.35x // 2.05x) – Teams will undoubtedly keep their rotations tighter in the playoffs. The Warriors played 8 players in their first play in game, the Grizzlies played 9 (only 6 players with 20+ minutes). Based on their two play in games, it seems that the players with the largest minutes deltas were the guys whose minutes lived in the high-20s to low-30s, while guys like Morant & Curry, who were getting 35+ minutes frequently during the regular season don’t have that much more room growth. JVal played a whopping 38 minutes in the first play in game which is a great sign. We’ve touched on his dominance on the boards, a trait that should be stable & low-variance on a night-to-night basis. He also took an impressive 16 shots en route to a 23-23 game. Not so sure the 16 shots can be projected with high confidence (although it is a perfectly attainable number), nonetheless between his solid offensive role & elite rebounding productivity JVal feels like a high floor play, with as good of double-double equity as any player on the slate.

Dillon Brooks (2.05x // 3.05x) – Like Valanciunas, Brooks (along with guys like Kyle Anderson & Jaren Jackson) was a player who saw his minutes tick up significantly has Memphis’ rotations tightened. He played an impressive 40 minutes, in which he took a team-high 21 shot attempts. Brooks falls in this bucket of players (with guys like Buddy Hield & Jrue Holiday) who aren’t the best or maybe even second best player on their team, but still ends up getting a lot of offensive usage that sometimes flies under the radar. Brooks was an efficient scorer on high usage against San Antonio, we like his chances to replicate that performance (or something similar) again tonight.

Kyle Anderson (1.85x // 2.8x) – With rotations so tight (there are only about 15 players that can be projected for more than 10 minutes), it is difficult to tab players as full fades with much confidence. Anderson might be one guy to avoid completely, his multiplier is quite low – at higher multipliers you can get guys who project for a combination of more minutes and/or offensive usage, or at lower multiples you can roster bonafide studs. Anderson is caught in an in between where we he is priced too close to studs to be considered over guys like Curry, JVal, Morant but is priced too efficiently to be considered over guys like Brooks, JJJ, Bazemore, Poole who have higher multipliers and are projectable for similar or better roles to that of Anderson.