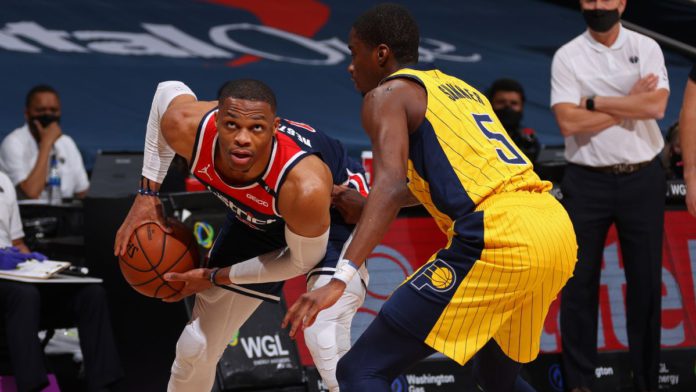 There is one spot left in the eastern conference playoffs and will either the Pacers or Wizards who will lock down the 8th seed to set up a first round match-up with the 76ers. Which players will shine in this shine in this Win or Go Home scenario? Let’s break it down!

Domantas Sabonis (1.3x // 1.95x) – Westbrook (1x) & Beal (1.15x) are primed to fill it up, they project quite well. But we really like Sabonis at an elevated 1.3/1.95x, he’s been getting extended run with Turner out, has pretty solid usage with LeVert out and Brogdon playing in short sprints, and also adds great rebounding rates that can run in the 15-25% range on any given night. While Westbrook & Beal make for really strong considerations, Sabonis might be the low-multiplier player to lock in.

Oshae Brissett (2.85x // 4.3x) – Brissett can fill it up in a number of categories – he can score from inside & outside the arc, he is a decent rebounder, a non-zero in assists & defensive stats, and doesn’t yield a bunch of turnovers. He also plays minutes in the high 20s to low 30s. So with a multiplier near the slate max, he might be a stone cold lock. It feels like the most likely route to Brissett not being in the optimal is not his own failure, but big games from the three studs (Westbrook, Beal, Sabonis) and then two other mid-to-deep options putting up big scores relative to their multiplier. This outcome isn’t totally out of the question given how fast this game is likely to play. But we’ll definitely take our chances on Brissett.

Malcolm Brogdon (1.75x // 2.65x) – At this rate it has to be Brogdon right? Prior to lock the other day it was announced that Brogdon would only play in short stints, if that continues to be the case it is hard to imagine him piling on minutes the way he has in the regular season. Brogdon is a fine player, but he isn’t so ball-dominant that it isn’t feasible for him to put up a big score in limited run, the way we’ve seen stars like Harden & Durant do at times this year.