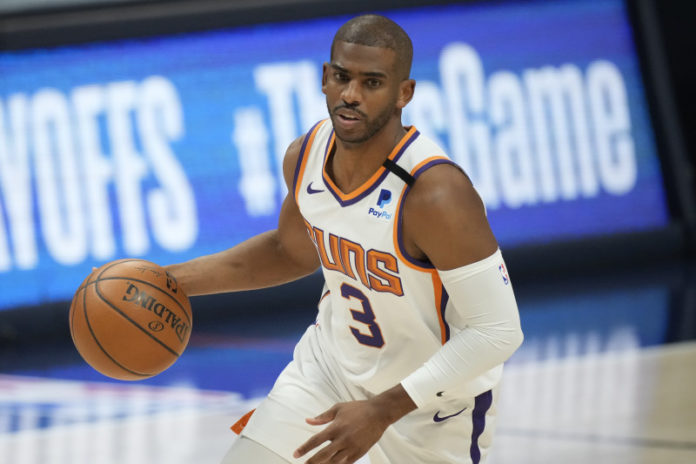 Chris Paul is BACK for the Phoenix Suns! The Suns have obviously done just fine without him taking the first two games of this series, but CP3 brings an entire different element to this game. The guys at Advanced Sports Analytics dive into the meaning of Paul’s return and who it impacts from the a SuperDraft stand point.

Before making your picks, read our EXCLUSIVE tips on how to play NBA Champion Mode!

At the time of this writing, it seems that Paul will play tonight after clearing the NBA’s health and safety protocols for COVID yesterday morning. CP3 tested positive for COVID on June 16 but has not shown any symptoms so we will assume that he will suit up as the Suns look to take a commanding 3-0 series lead in the Western Conference Finals.

CP3 was nothing but superb in his last 4 games when the Suns swept the Nuggets. Paul averaged 35.55 minutes, 14.75 field goal attempts, 22.85 usage %, and 1.49 SuperDraft points per minute in the series. Compare those numbers to his per game averages during the regular season: 30.86 minutes, 12.28 field goal attempts, 21.94%, and 1.25 SuperDraft points per minute. Clearly CP3 has found another gear this postseason and the 36 year old point guard now has a golden opportunity to punch a ticket to the NBA Finals, something he has not yet accomplished during his illustrious career. He deserves serious consideration for the Champion spot on your SuperDraft lineups.

If we plan on rostering CP3 and placing him in the Champion spot, it would make sense to pair him with a player who correlates well with him. During the Suns-Nuggets series, Crowder’s and CP3’s SuperDraft points had a correlation coefficient of 0.74  and CP3 often targets Crowder in transition. Crowder also experienced great success against Denver when CP3 was active but not so much with CP3 inactive during Games 1 and 2 of the Western Conference Finals.

Crowder’s SuperDraft points per minute was 0.82 against Denver but has dropped precipitously to 0.58 against the LA Clippers. The return of CP3 should help Crowder realize a high level of production. The current projection does not take into account a player’s interaction with a teammate so sometimes we need to look beyond the projections.

As you can tell, the theme of this analysis has been about CP3 and how his presence may affect the play of others on the court. While Crowder has a strong correlation with CP3, Bridges does not. During the Nuggets-Suns series, Bridges correlation coefficient with CP3 is -0.55. Bridges had a great game during Game 1 against Denver but that was CP3’s worst performance (not by much compared to Games 2, 3, and 4).

Still, when CP3 performs well, it’s at the expense of Bridges production. On June 1, when the Suns played the LA Lakers, Bridges had his 2nd best SuperDraft performance this postseason with 41.50 points while CP3 had his 2nd worst game with 24.50 SuperDraft points. Bridges is on a downward trend which makes for a reliable fade.