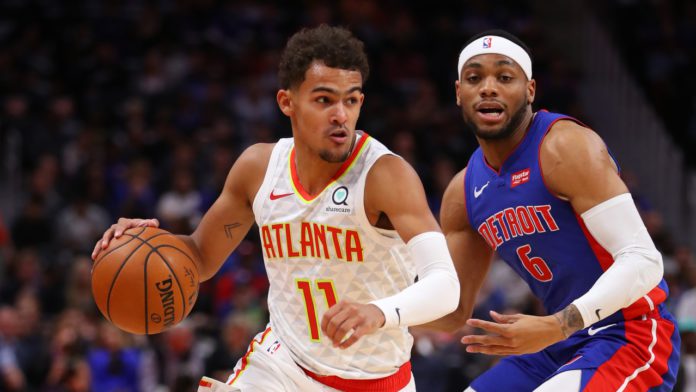 Our Tuesday slate of seven games was cut to six after the postponement of Laker vs Clippers due to the devastating news of Kobe Bryant’s death early on Sunday morning. While the rest of the NBA will be playing with a heavy heart, the city of Los Angeles understandably will take this day to collect their thoughts and reminisce on the illustrious career and life of Kobe.

With the Mavericks, Hawks, Pelicans, and Nuggets playing on Tuesday, SuperDraft players have their pick of plenty of young phenoms across the league. Let’s see who we’re focusing on tonight!

Join our NBA Jump Shot contest and see if you can take home the first-place prize of $4,500!

It’s hard not to notice what Trae Young has been doing in just his second year in the league. In the past two games, Young averaged 37.6 points, 15 assists, 4.7 assists, 1 steal and 67.8 fantasy points per game while getting a double-double bonus each game.

One of those games was against the Raptors and in two games against them this year, Young averaged 36 points, 12.5 assists and 8 rebounds per game.

His FG% has been up and down in that span but he is taking over 20 shots per game including almost nine threes. His volume and threat to pass the ball effectively make him a lock regardless of who he plays.

Boston Celtic fans haven’t thought about Kyrie Irving for even a second after Kemba Walker arrived in Boston. The team is revitalized and Walker is a much better fit for the younger guys on the team. Walker averaged over 60 fantasy points over the last two games where he put up an average stat line of 36 points, 5 rebounds and 3 steals while adding 10 threes.

In one game against Miami this year, Walker put up 28 points while adding 7 assists, 4 rebounds, and 2 steals. He finished that game with 54.5 fantasy points on the heels of 6 threes. Walker is as good of a bet as any to go nuclear tonight and get you 60 plus fantasy points.

Khris Middleton is in a dream spot against a Wizards team that allows the third-worst 3-point percentage to opposing players at 37.2%. Middleton makes his money from behind the arc shooting 42% for the year and over 50% in his last four games.

He also averaged 20 points per game in his last four games and almost 40 fantasy points during that stretch. Middleton at 1.45X seems like a reasonable risk given that he averages 18.4 ppg against the Wizards which is his second-highest total against any team.

By inserting Zion Williamson into your lineups at 2X, it is guaranteeing you at least 60 fantasy points. In the first three games of his career, the Duke product has averaged 19.3 points, 8 rebounds, 1.7 assists and 29.9 fantasy points per game.

Even a great defensive team would have a hard time game planning for a player that uses his intangibles to affect a game and the Cavaliers are hardly roll out a ‘great’ defensive effort every night. They rank 29th in defensive efficiency and allow the second-worst FG% in the NBA with their opponents shooting a shade under 49%.

The Grizzlies gave Nikola Jokic fits in their first meeting this year but he got his game back in their second go-around by recording a triple-double and 64.5 fantasy points. He has also been on a tear as of late recording six-straight double-doubles with a couple of triple-doubles sprinkled in.

If you factor in his current multiplier, he would have averaged over 62 fantasy points in that span. When you couple that with the fact that Memphis allows the 23rd most points to opposing centers, the Joker is more than capable to keep his double-double streak going and push towards 70 points in this matchup.

Daniel Theis has been called on for the Celtics’ last two games with Enes Kanter being sidelined due to injury. He has played well all season and has seen over 30 minutes in each of the last two – something that he has done only four times this year.

In the four games where he has seen over 30 minutes, Theis averaged 11 points, 9.5 boards, 2 blocks, and 34.4 fantasy points per game. If you factor in his current multiplier, he would have averaged over 56 fantasy points in those games and is in a good spot to do so here again.

Theis played one of his better games of the year against the Heat earlier this season when he put up 8 points, 10 rebounds, 3 blocks, 2 assists, and a steal.