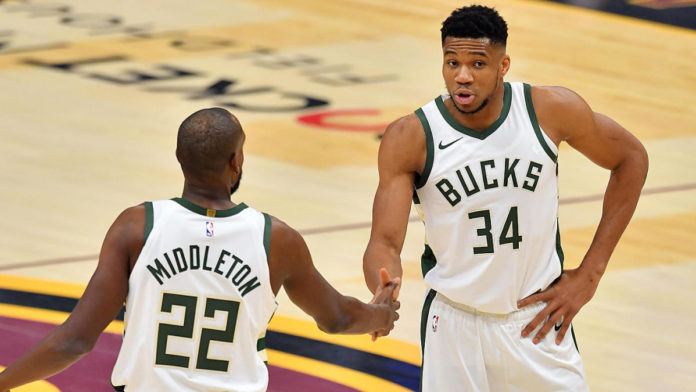 There are not many people that would have predicted the Bucks and Hawks would be playing each other for the right to play for the NBA finals but here we are! Our partners at Advanced Sports Analytics are ready to provide you with the best plays and projections for Game 1 of the eastern conference finals!

Before making your picks, read our EXCLUSIVE tips on how to play NBA Champion Mode!

Middleton has had a huge role for the Bucks this postseason, when the games have been close he’s been dialed in to a 40+ minute role, there is a decent chance he plays more minutes than any other Buck. He’s not as efficient as Giannis (1.15 fantasy points per minute compared to Giannis’ 1.75), but with the projected big role & 1.4x multiplier we can see how Middleton is a threat to push 70+ post-multiplier fantasy points.

Giannis is finally getting help and Lopez has been nothing but reliable in the post, perimeter game, and on defense. During 4 of the last 5 games, Lopez has had at least 3 combined steals and blocks. That is at least 9 fantasy points and when you apply the multiplier that is close to 20 fantasy points. If we get a double-double out of Lopez (or close to one), now we are looking at a 60 fantasy point evening from him.

Capela has simply looked out of sorts this postseason. His minutes are up (which is good), but many of his efficiency metrics are way down. His regular season rebound rate of 25.11% (which saw him lead the league with 14.3 rebounds per game) is down to only 18.58%. His 5.67% regular season block rate (1.2 blocks per game, 6th best) is down to 3.8%. His offensive usage (function of field goal & free throw attempts & turnovers) is down from 19.8% to 12.76%. While offensive productivity isn’t Capela’s bread & butter, the rebounding and defensive efficiency are very concerning, and have resulted in per-minute dip from 1.41 fantasy points per minute to 0.93. With a relatively low multiplier of 1.4x, there are simply better options at, above, and below is price point.