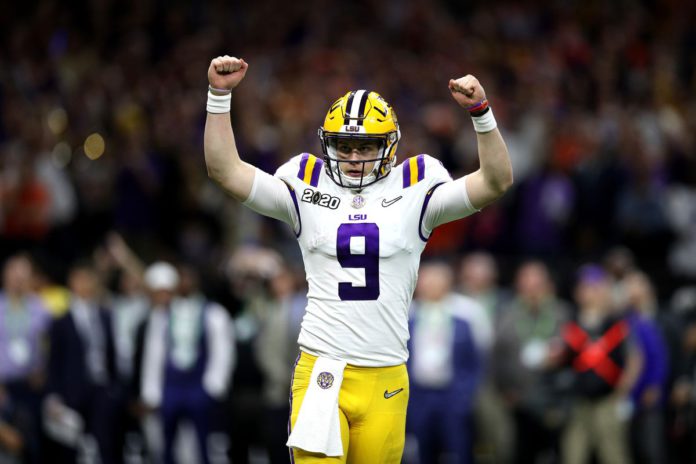 College football is played with a nearly identical set of rules as the NFL, excluding a few specifics such as two feet in bounds for a catch and other small differences. Division 1 football is considered to be the second tier below the National Football League because football, unlike other sports, does not have any “farm system” or “developmental programs”.

The Power 5 conferences are the:

The Group of 5 conferences are the:

While the Power 5 schools are considered elite, all programs in the FBS are considered larger in revenue, prestige, and stature athletically than their FCS Counterparts. Finally, NCAA Division 1 college football has one more subdivision called Independents. These Independents are four-year institutions whose football programs are not part of a pre-established NCAA subdivision.

College football, like everything else, was subject to a bit of an anomaly in 2020 due to COVID-19 implications. For instance, Notre Dame, a typically independent program, played an entirely ACC-team-filled season last year. Despite these oddities, the cream-of-the-crop rose to the top, per usual. Over the last ten years, 23 of the top 25 teams are represented by the Power 5 conferences, with the 2 exceptions being the University of Notre Dame (Independent) and Boise State University (Mountain West Conference).

The number 1 team in college football was last year, to no one’s surprise, the Alabama Crimson tide. They have won 6 national championships (‘09,’11,’12,’15,’17,’20) under Coach Nick Saban’s reign. In that same reign, they have produced 39 first-round draft picks, the most of any program since 2000.

This year looks to be much of the same. Despite a turn toward normalcy, the top programs will likely remain as such. Fortunately for us, because college football is so highly sought after, making sure you’ve got all of the information needed to draft a great collegiate daily fantasy football lineup should be easier!

On SuperDraft, scoring college football daily fantasy points are the same as scoring for our NFL offerings. Check out our DFS Rules & Scoring, but for a quick summary, you will draft:

Your lineup must consist of players from at least 2 different games with a pretty standard scoring format. Because SuperDraft offers the Multiplier mode instead of a Salary Cap option, this gives you the freedom of choice when drafting your lineup. There are a few things we recommend you look for to produce the strongest lineup possible.

Odds Are In Your Favor

The Las Vegas odds are a great place to start when drafting a college football fantasy lineup. Check the over/unders for each game. Typically, those are pretty close to accurate. Games with a higher over/under are games you should consider selecting the majority of your players from! Because you are drafting all offensive positions, the defense is not something to consider here.

Despite not having a salary cap to stay under, some SuperDraft players still attempt to get a value quarterback with a higher multiplier. We do not recommend this. Instead, consider making your quarterback your champion. Especially at the collegiate level, quarterbacks will put up MONSTER numbers, and this is often a deciding factor in a winning or losing lineup.

Let’s face it, collegiate football is only important on Saturdays. A player sitting due to academic mishaps is not unheard of, however, it may be difficult to find before your lineup locks. This is an inherent risk of college football fantasy lineups and is something to keep in mind.

Draft a tight end from a Power 5 conference school and/or a top 25 program and you’ll be pretty safe. At the collegiate level, tight ends are not standout players. Quarterbacks, running backs, and wide receivers are typically the playmakers. Do not put too much time and effort into selecting your tight end. Instead, focus on the other, more important scoring positions.

When selecting your lineup(s), it is wise to select players from top programs. College football is typically higher scoring than the NFL. If your fantasy lineup is comprised of players from the highest-scoring games, it is likely that you have a winning lineup on your hands. This coincides with the aforementioned, “Odds Are In Your Favor”. Over/Under predictions may lie, but not often.

Similar to other competitions, you have to look for matchups. Consider a star receiver for LSU going up against the #1 ranked cornerback in all of college football. That particular receiver is not likely a good choice for your daily fantasy football lineup. Instead, look for a running back playing against an injured defensive line. These matchups can be a huge difference-maker for your fantasy wins and losses.

With the history of the game, the trends over the last decade, and a solid game plan to draft, it’s time to get in on the action. We’ve got all of your fantasy college football favorites on SuperDraft.