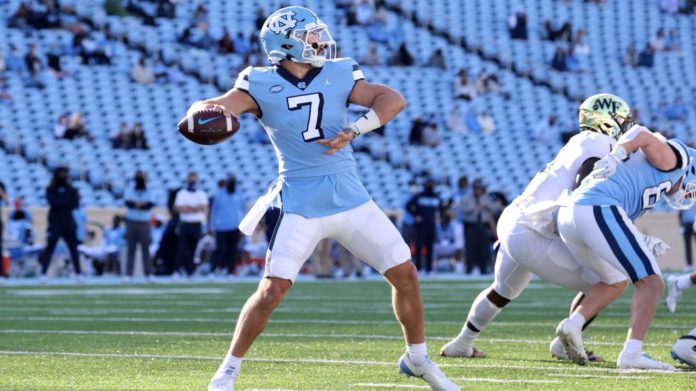 At first glance we have a much more condensed college football DFS slate Saturday, with only a 23.5-point gap between the games with the highest and lowest totals, which means we’ll have quite a few more viable games and different paths to choose from in our SuperDraft lineup builds. What’s more, only four of the 12 games are double-digit spreads, and one of those involves a 20-point spread in a Georgia game you weren’t going to be using many players from anyway. So really, 11 of the 12 games are viable, and we’ll want to pick and choose the best spots being cognizant of both multipliers and creating a safe production floor for ourselves. Let’s consult the chart.

We get a very DFS friendly UNC/Miami game (high total/low spread) with a few obvious pieces to choose from, and there should also be firework in the A&M Missouri clash, with this potentially being a hangover spot for A&M after toppling Bama (with a backup QB no less) but going up against an opponent that refuses to stop anyone. A&M’s ground game will be very popular and for good reason. Pittsburgh/Va Tech also has the makings of a sneaky shootout, and there are certainly usable pieces in the Texas/Oklahoma St and Baylor/BYU games, plus our boy Kenneth Walker III is again on the slate. There will be plenty of options, but I’ll highlight my favorites below.

Let’s get this out of the way: Howell and UNC have certainly had some Jekyll-and-Hyde tendencies this season, and more Hyde (I think Hyde is the bad one) than you would want with the relatively soft schedule they have faced so far. Still, Miami is in a tailspin during what was already going to be a turbulent season of transition for them and if there were ever a get-right spot for Howell, it would be here against a porous Miami defense but in their last action gave up a ton of production versus UVA and Brennan Armstrong. Yes, he’s got that minimum multiplier tag, but if the Dr. Jekyll version of this team shows up, UNC should put up plenty of points.

I’m not sure if anyone in the ACC or even all of college football has exceeded expectations more than Kenny Pickett so far this season. He’s managed over 1,700 yards and 19 TDs against only a single interception while increasing his efficiency over the first five games, while also adding 2 rushing scores. It is certainly true that he’s had cupcake matchups to inflate his numbers, but he’s also held his own and impressed against Georgia Tech and Tennessee. While Virginia Tech is the best defense he’s seen thus far by a good amount, we should still see some gaudy numbers as Pickett continues his unlikely charge toward a Heisman campaign.

While he hasn’t been asked to do quite as much as some other QBs, Bohanon has been impressive in his own right. Consider his last outing against WVU, where he put up 336 yards and 4 TDs through the air. He even added a rushing score for good measure. In the battle of Mormons vs. Baptists, Bohanon is the most explosive player on the field by a good margin and has two bona fide pass catchers in Tyquan Thornton and RJ Sneed. While the TDs have mainly been to Thornton and TE Ben Sims so far, Bohanon spreads the ball around enough that you can either play him naked or pair him with one of his top three options.

I’m doing the unthinkable here and recommending a volume back as my top RB who isn’t Bijan Robinson. The logic is simple: Bijan is obviously great, probably the best player in CFB, but boxes are starting to be stacked against him and he goes up against a particularly tough defense this week in Oklahoma St, not to mention he’s a the minimum multiplier. That opens the door for Walker at a slightly more attractive 1.3X, who has had a breakout season in his own right. He happens to lead all of FBS in rushing yards with 913 through his first 6 games. He’s gone for 23-plus carries in four of sox and has put up over 100 yards in each of those four that he’s had enough opportunity, including two of those over 200 yards. The Spartans clearly want him to be a workhorse here, and he’s delivered beautifully thus far. While a plodding team like Indiana isn’t an ideal matchup for a ceiling game, if Jalen Nailor calms down a bit and the TD variance tips back to Walker’s favor, we should see another dominant performance.

This is the other side of the Texas tilt where we expect a lot of points. Warren has seen even more volume than Robinson or Walker at times, getting as many 32 carries against Boise St and 36 against Baylor. He’s gone over 100 yards in each of his last 3 games, and scored twice in two of those. He is now going up against a defense that allowed Kennedy Brooks to put 25-217-2 even in a game where OU was trailing for a good bit. He should get plenty of volume again and this game should move at a quicker pace than most others, allowing him even more opportunity for a ceiling game.

This one is going to be all about explosive plays and TD variance. UCF’s defense is legitimately terrible, and either Ridder or Ford will put up some extremely good numbers here. It might be tough for both to do so, as this one should get out of hand quickly. Additionally, UCF may not have the continuity on offense to keep up, as Cincy’s defense is much tougher than any they’ve faced thus far. In lineups where you don’t have Ford, you’ll want to consider having Ridder, and vice versa.

Does this sound familiar? “Missouri’s rush defense is the worst in the country, and you should play running backs against them.” It’s true. It’s not particularly insightful or original, but it sure is true. The key here is getting these two right, as it is entirely possible they both have big games. Surely the TDs will lean one way or the other, and if they end up having roughly equal games, obviously the multiplier on Achane makes him the more attractive play. Neither was particularly effective against Bama last week, but A&M made their hay through the air in that game, and both backs were involved in that too. My gut tells me Achane will end up with fewer touches, but more yards and more TDs, which would make him an elite GPP play in this spot.

Downs is an absolute beast and is certainly in the conversation for being the top wideout in the country. He has been a model of consistency for UNC in a season that has been anything but consistent. He’s had exactly 8 catches in five of his first six games, and in the sixth he had 9 catches. He’s also gone over 100 yards in four of six and scored at least once in each game. Downs is as reliable as it gets and should have no trouble piling up fantasy points against a Miami defense that has struggled to stop opponents from making big plays all season.

If Downs is considered the 1A on this slate in terms of ensuring yourself a reasonable combination of floor and ceiling, then Addison has to be considered the 1B. The matchup isn’t ideal against a decent VT secondary, but Pickett is on a mission to solidify his Heisman campaign (and also win the game!) and should be looking to Addison early and often to accomplish that. It’s not quite as simple as just play Downs in your Howell lineups and Addison in your Pickett lineups, but I wouldn’t fault you for having some builds that did just that.

We are taking a bit of a risk here, as we generally are doing when diving deep into the high multiplier players, but Thornton turned in a massive game against WVU and may see another game at this increased volume against a tough Baylor squad that will be selling out to stop the run. If you are running out Bohanon in either your QB or S-Flex spot and are looking to pair him with someone, you could do far worse than Thornton at this multiplier.

Like this content? Subscribe to FTN today to receive the latest in fantasy news. Use promo code: SUPERDRAFT to receive 10% off on all packages on all 3 sites (FTNFantasy, FTNDaily, FTNBets).