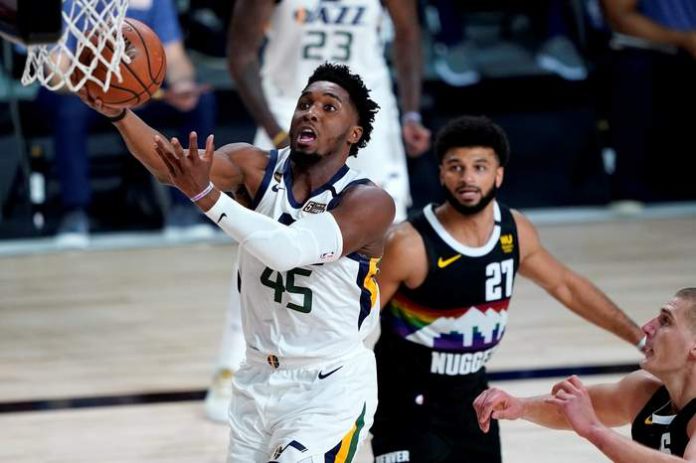 For the first time since the playoffs started, there are only two games on the slate. We got two crucial Game 5’s between the Jazz and Nuggets and the Clippers and Mavs. There have been dynamic performances by so many guys in the bubble, it has made it very difficult to make your selections for your lineup. Allow me to make this process easier for you. I am going to provide you with two players that should be locked into your lineup. Starting off with a star who might be making the leap to Superstardom.

With no Bojan Bogdanovich and Mike Conley missing the first two games, there was already an expectation that Donovan Mitchell would shoulder a huge load. However, what we have seen in these four games against Denver is even greater than what anyone could have expected. Mitchell in these four games averaged 39.5 points, 4.5 rebounds, 5.8 assists, and 56 fantasy points per game. With Denver missing Gary Harris and Mitchell increasing his usage rate, it has resulted in him basically turning into Michael Jordan. Mitchell has shown no signs of slowing down and Denver’s defense has shown no signs of improving.

Even better for Mitchell is the fact he is still carrying a juicy 1.45X multiplier. When you factor that in to his average for this series, he has averaged 81.2 fantasy points per game over the course of the four games. This is a superstar level performance we are seeing out of Mitchell and he is a no-brainer at the multiplier of 1.45X.

There are plenty of things to be disappointed in with the Clippers as they are now tied two games a piece with the 7th seed Dallas Mavericks. One of the things not on that list is the offensive production of the reigning NBA Finals MVP Kawhi Leonard. Leonard in the first four games of this series averaged 33 points, 10 rebounds, 5 assists, 2 steals, and 60.4 fantasy points per game. When you include his multiplier of 1.25X, that average goes up to 75.5 fantasy points per game.

Given where this series is at, Kawhi is under a lot of pressure to continue to play like this. The Mavericks have Luka Doncic controlling the best offense in the NBA and Paul George inexplicably has forgotten how to play basketball. George is averaging 15.3 points per game on 29% shooting. Kawhi can’t play much better than he has but he is going to have to keep his team from an embarrassing first round exit. When Kawhi is under pressure, he typically answers the bell and that should make him extremely valuable on SuperDraft.