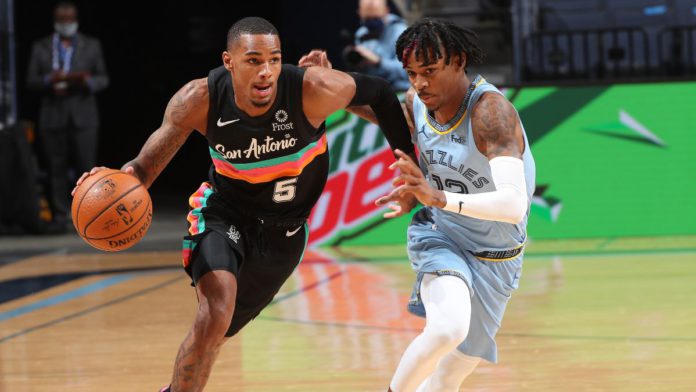 In a win or go home game, the San Antonio Spurs look to return the pounding they received from Ja and the Grizzlies earlier in the season. Which players will go off in this western conference play-in game? Let’s break it down!

Jonas Valanciunas (1.15x // 1.75x) – This is a game where the question can be raised: do we have to play any studs? It is a fair question, unlike last night in which guys like Sabonis, Tatum, Westbrook, and more made up the top tier of players, the 3 most expensive players tonight are DeRozan (1x), Morant (1.1x), an JVal (1.15x). All of these guys have paths to failure – as where studs from last night had paths to underperformance but few paths to utter failure. JVal’s best trait is his rebounding, which we would argue is the lowest-variance stat to score fantasy points through. A high-scoring player might take 20+ shots a game, which will be subject to some shooting accuracy variance, but a high volume rebounder (especially one like JVal) will be subject to 100+ shots a game (both as offensive & defensive rebounder), of which maybe half go in, half available for rebound. Morant & DeRozan will be flashy options due to their high-scoring potential, but Valanciunas could end up being a more valuable & stable option through his ability to dominate the glass and add extra value as a scorer and shot-blocker.

Jaren Jackson Jr. (1.85x // 2.8x) – We’ve seen Memphis tighten their rotation a little bit late in the season – giving more minutes to starters & keeping bench player stints short. With Jackson it is all about minutes, he’s got a per-minute efficiency about in line with fellow frontcourt mate Valanciunas, but his minutes haven’t been huge since his return. We did see an uptick in his last appearance of the regular season, in which he played nearly 32 minutes. His per-36 numbers are great (2.4 made threes, 8.7 rebounds, 1.7 steals, 2.5 blocks, 22 points), if he can combine solid minutes (getting to 30 minutes would be a win for JJJ), his usual per-minute efficiency or better, and a solid multiplier he should be a strong consideration.

DeMar DeRozan (1x // 1.5x) – It is a tough game to feel like there is any one player that can be completely nuked from your player pool. DeRozan is kinda the preferred fade by default simply because he has the lowest multiplier. The Spurs aren’t the type of team to give DeRozan 40+ minutes of run, DeRozan does a little bit of everything but isn’t an exceptional fantasy producer in any one category. He has minimal double-double equity, he doesn’t take many threes, and isn’t a hyper-productive defender. These are four player archetypes that are highly rewarded in SuperDraft scoring, a guy who is the minimum multiplier and doesn’t fit into any of these buckets feels like someone we can pass on.