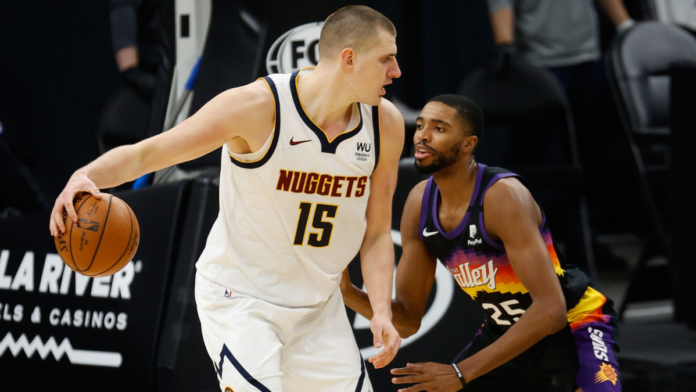 After being an underwhelming fantasy option for the whole playoffs due to injury, Chris Paul came out and put up 21 points, 11 assists, and 6 rebounds in Phoenix’s Game 1 win over the Nuggets. Which players can we expect to have big performances in Game 2? Let’s get into it!

After looking at our picks, Enter our $15 multi-entry NBA Jump Shot contest with $6,000 in prizes!

Devin Booker (1.25x // 1.9x) – Tonight’s projections are very very tight, there are only 13 post-multiplier points that separate our top projection (Booker) and our 10th best-projected player (Payne). We’ve seen this type of separation between best & second-best projection on some Champion Mode slates. Booker feels like the best option because his multiplier separates him a bit from 1x Jokic and guys like Ayton & Paul don’t have quite enough juice for them to catch Booker. Booker is a pure scorer, he doesn’t add much fantasy value on the defensive end and he can be expected to compile a handful of rebounds & assists to add some peripheral value.

Monte Morris (2.35x // 3.55) – The Phoenix Forwards Bridges & Crowder make for strong considerations and we could also go back to Campazzo. Morris also figures to be a really strong play, he can have some spiky games in usage & minutes. At 2.35x/3.55x a ceiling game coupled with a strong multiplier could make Morris a slate-breaker. Guys like Bridges & Crowder have better floors, as they are locked into more stable roles, but Morris figures to the high-multiplier option with the best ceiling.

Torrey Craig (2.3x // 3.45) – There have been points in this season where Craig has been a Champion Mode consideration – when guys like Crowder & Cam Johnson have been out. But Phoenix is fully healthy at the Forward position, and Craig has been the odd man out, getting minutes in the teens at best. He does have defensive upside that could net him a decent game, but you’re counting on big efficiency and positive variance for Craig to be fantasy relevant.