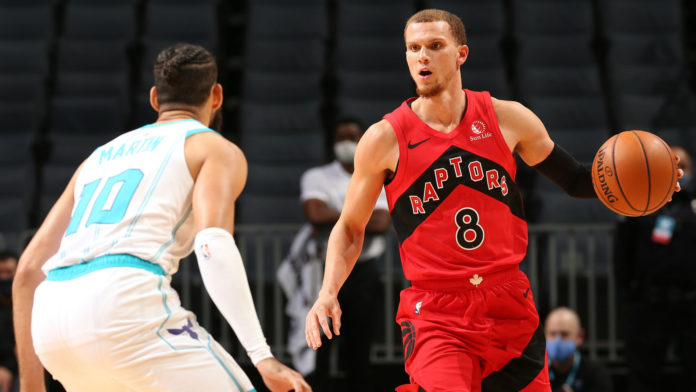 Toronto continues to be thin on bodies: new day, different set of starters expected to miss tonight’s game. VanVleet is expected to be back from injury/suspension, Siakam is now expected out, OG Anunoby & Gary Trent will likely miss their second game in a row, and Kyle Lowry continues to be out. We’re left with a lot of vacated opportunities in Toronto, which should benefit some of the remaining high-multiplier options in their rotation. As of now, there aren’t any high-profile players with uncertain status for tonight’s main slate games. Let’s dig into tonight’s picks and projections.

Malachi Flynn (1.95x) – Flynn is one of the Raptors that is in a prime position to benefit from their slew of injuries. The Lowry & Trent injuries are particularly relevant for Flynn, as they typically garner a lot of minutes at the guard positions. While Flynn doesn’t have a ton of positional overlap with Anunoby or Siakam, they are both high-usage starters that vacate a significant amount of Toronto shots, Flynn stands to soak up some of their usage.

Cole Anthony (1.8x) – With Michael Carter-Williams out tonight, Cole Anthony is expected to start at point guard. Back in January & early February when MCW missed significant time Anthony was consistently playing minutes in the high 20s to low 30s, so it seems like Anthony gets a good run tonight. During that stretch Anthony averaged 30 minutes, a 22% usage rate, and 11.5 field goal attempts per game – and this was while high-usage players like Evan Fournier & Nikola Vucevic were still with the Magic.

Chris Boucher (1.3x) – Boucher is in a similar position to Flynn, he is priced a bit more aggressively, but that is warranted given his excellent per-minute efficiency.

Michael Porter Jr. (1.4x) – We’ve really seen MPJ turn it on during Jamal Murray’s recent injury stint, and now that Murray has been ruled out for the year (due to gruesome ACL injury in his first game back) we can expect that to continue. In the 6 games that Murray has missed this year, MPJ has averaged 33.5 minutes, 15.5 field goal attempts, and a 23% usage rate per game.

Nikola Jokic (1.05x) –  Like MPJ, Jokic also stands to benefit from Murray’s injury. Denver has the second highest total on the slate, going up against the porous Houston defense.

Jusuf Nurkic (1.65x) – We talked about Durant a few articles ago as being in this camp of players returning from injury whose minutes are being monitored, are trending up, and will eventually reach a point where they are underpriced for their ascending role. There is some risk of trying to time these guys optimally, but in general I would prefer to be early rather than late on these type of trends. Nurkic was close to 26 minutes in his last appearance, that is pretty close to the ceiling we could expect him to reach. In his return his field goal attempts per game have been centering around 6 or 7. Earlier this year (when he was playing minutes in the high 20s), his attempts were centered around 8-10 attempts per game, the hope is that he’ll converge towards that number as he gets more comfortable at game speed.