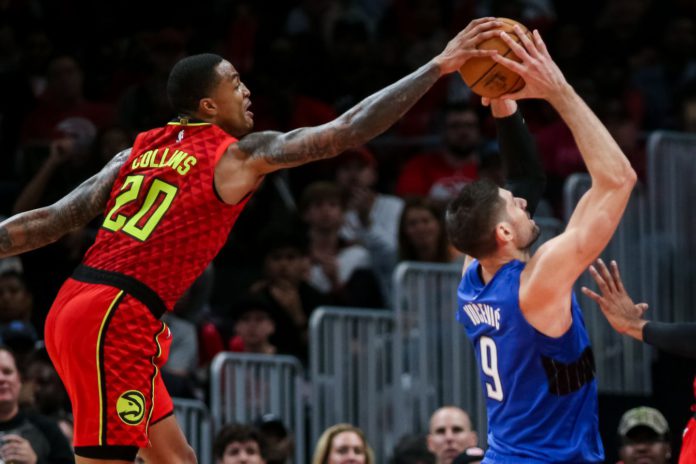 With no lineup limitations on a five-game slate, top tier talent is doubly important in order to minimize the risks in a limited player pool. This is not a slate where you want to get cute with your longshots but I have a couple of mid to low-tier options to think about plus a strategy focused on attacking teams on the second half of a back-to-back.

Despite being on the second game of a back-to-back, Jordan Clarkson holds a lot of value at 1.75X with the way he has been playing over his last four games. You do not see many guys in this tier averaging 22.75 points, 4.3 rebounds, 4 assists and 64.64 SD points per game (factoring in his multiplier) and that’s what Clarkson has done in his last four.

I mentioned the up-tempo Houston offense and how it allows them to get more shots off, but it also allows their opponent to create more chances as well considering the Rockets’ don’t hold the ball long before they attack. This bodes well for Clarkson who in seven games where he has taken 17 or more shots this season, he is averaging 40.7 SD points per game and 71.2 if you factor in his 1.75X multplier.

Giannis has been other-worldly in his last nine games averaging 31.1 points, 17 rebounds, 7 assists and 66.3 SD points per game. There was only one game in that span where the Greek Freak scored less than 60 fantasy points and three saw him go over 70. One of those games was against the same Sixers where he tallied 36, 20 and 6 to reach 72 SD points.

Even at 1X, Giannis is a guy you want in your lineup in a smaller slate like this. Expect Giannis to play the majority of this game as usual when playing a good team like the Sixers who are awful on the road.

I love picking on teams on the second half of a back-to-back and the Mavericks fit the bill, especially if Kristaps Porzingis sits. There has not been any talk of this yet, but the Mavericks have sat Porzingas in the second game of their last two back-to-backs. If this continues then Collins’ holds even more value but he has been playing well enough to expect a great output even if Kristaps suits up.

In his last seven games, Collins is averaging 24 points, 9.7 rebounds and 45.4 SD points per game and his multiplier turns that into 61.2. I have the talented Collins at a floor of 50 with a chance to pass 70 should Porzingis sit this one out.

The player pool for Center has some great names, but I want to stay away from some of them tonight. I mentioned that Porzingis is on a back-to-back but if he does play I like him at 1.25X. As for the others: Drummond (1.25X) has not fared well since his move to Cleveland, Ayton (1.25X) is on a back-to-back and does not have enough juice for me and Gobert (1.3X) has a matchup that is a big man’s nightmare. With all that being said, Embiid should be the highest-scoring Center on this slate.

Embiid started the second half off on Thursday by dropping 39 and 16 en route to a 71 SD point night. He also has had success against the Bucks in the two games they have played this season averaging 25, 11 and 4.5 giving him over 59 SD points per game with his current multiplier. Getting into the 60s should be no problem for Embiid tonight who should be rested and ready to go.