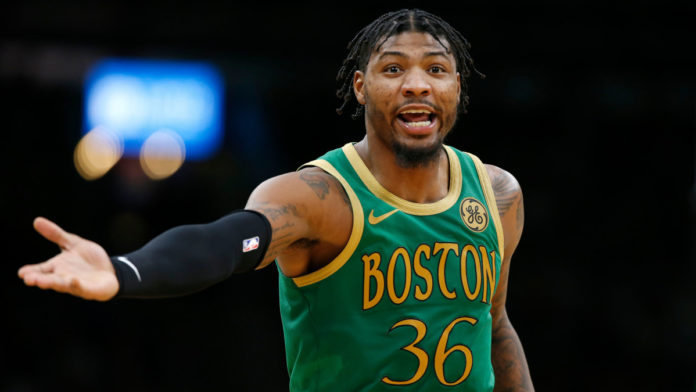 The All-Star break is supposed to be a time for players to get healthy and gain some much-needed rest as they prepare for the home stretch. Unfortunately for some, they head into the break a little more banged up than they would like to be. Marc Gasol has been out for a bit but for guys like Damian Lillard, Kemba Walker and Karl-Anthony Towns, they did not expect to be in this position following the layoff. Here are my top plays tonight to try and combat the injury bug!

With Damian Lillard sidelined for “three to four games,” C.J. McCollum will see an uptick in usage in his absence. He has struggled a bit in recent games but a rest from the All-Star break should benefit him just as much as being the main option in Portland.

In two games without Lillard this season, McCollum is averaging 29.5 points, 5 boards, 7.5 assists and 57 SD points per game. That soars to 88.35 when you factor in his multiplier. In those games, the talented scorer totaled nine threes and averaged over 25 shot attempts per game – six more than his season average. I’m not guaranteeing 88 SD points, but he should be taking a lot of shots tonight and I have his floor at 65.

Marcus Smart has an opportunity to feed off his performance against the Clippers prior to the All-Star break with Kemba Walker out with a sore knee. In that game, Smart went off for 31 points, 4 rebounds, 3 assists, 4 steals and 52 SD points without his multiplier.

Walker on the sidelines means more minutes for Smart and he has handled those minutes well in the seven games he played in without Walker. In those games, he averaged 16.4 points, 3.6 boards, 6 assists, 2.7 steals and 40.4 SD points per contest and his 1.6X would have made it 64.63. Smart can be streaky but always brings it defensively and can rack up an array of points with his minutes going up. Ride with Smart against a week Minnesota team tonight.

Serge Ibaka was a staple in Kyle Schroeder’s picks over the holidays because of his play in the absence of Marc Gasol. He imprinted it in my brain that Ibaka holds value in this range with Gasol out and it’s all I can think about now that he is on vacation. I miss Kyle already and this pick is in his honor.

In 14 games without Gasol where Ibaka has played over 30 minutes, Ibaka’s averages go up 5 points, 2 rebounds and 8 SD points per game. In those games, he is posting 21.14 points, 9.6 boards and 39.13 SD points per game. That average gets to 58.7 with his multiplier and he is poised to have himself a night against the Suns at home.

Out: Karl-Anthony Towns MIN vs. BOS

James Johnson probably has the highest upside out of anybody in this slate. Karl-Anthony Towns has had a rough season in terms of stay healthy, and it looks like his injury bug is back. In KAT’s absence in the Wolves’ last game, Johnson played over 32 minutes and finished the night with 37.25 fantasy points. Not great, but he has handled extra minutes well in a small sample this season.