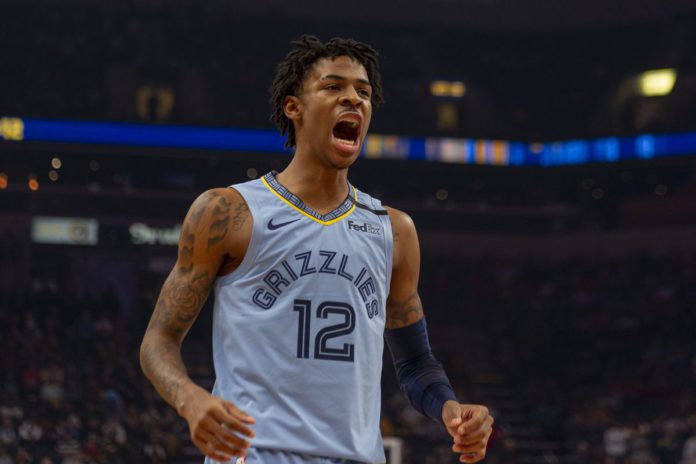 Today is one of the most unique days on the NBA calendar.

With it being Martin Luther King day, a national holiday, the NBA takes advantage and has several games tip-off before 7pm. SuperDraft is offering contests for an 11 game slate that has six games that start at 5pm ET. Let’s jump into the top picks for Guards for tonight’s contests.

The Warriors are ranked 20th in the NBA in defensive efficiency and are giving up the 3rd most fantasy points in the league to opposing point guards. Lillard has already shown how he can perform against this Warriors team on November 4th where he put up 39 points, 4 assists, and 52 fantasy points. You should expect Lillard to land in the range of 50-60 points in this game. When you factor in the 1.25X multiplier, that will get him around 62.5-75 fantasy points.

I expect this run to continue for Morant as he goes up against the Pelicans who give up the 5th most fantasy points to opposing point guards. The Pelicans are also ranked 25th in the league in defensive efficiency. With the way Morant is going right now, he provides great value at 1.5X.

The Warriors were the most high profile team in the NBA for the past five seasons. With Kevin Durant departing and injuries disrupting Steph Curry and Klay Thompson, the Warriors are irrelevant as the worst team in the western conference. One of the players not getting much attention is Damion Lee. Lee has gotten the chance to play more with D’Angelo Russell missing time and has continued to play with Russell healthy. He has been a high-return fantasy player for the past month.

In the past 11 games, he averaged 14.8 points, 6.9 rebounds, 3 assists, 1.5 steals and 32.2 fantasy points per game. He has also shown the ability to pop off for a big game. He had one game where he scored 40.75 fantasy points and another where he got 56.25 fantasy points. With the Blazers ranked 23rd in defensive efficiency, this has a shot to be another one of those games where Lee is a game-changer for your lineup. With the 1.7X multiplier, he has the ceiling of getting between 69.3-95.6 fantasy points.

With Anthony Davis most likely out again for the showdown against the Celtics in Boston, Lebron again becomes a great choice for your lineup. For his career, he’s averaged 29.3 points, 7.2 rebounds, and 7 assists in 51 games vs the Celtics. 29.2 points per game is the highest per game average for him against any team in the NBA. He is catching the Celtics at a good time as well. Boston has lost three straight games and has given up an average of 122.3 points per game in the three games.

With Lebron’s outstanding track record against the Celtics, the Celtics struggling defensively, and Lebron having to carry the load again with Davis out, he is bound for another monster game. It was difficult taking him over Giannis though even with him having a slight multiplier edge at 1.05X. However, with Giannis facing the Bulls — a game which is most likely going to be a blowout — Giannis should not have as many minutes to rack up fantasy points as Lebron. Lebron should be a cornerstone for your lineup tonight.

The Spurs have had a down season but very quietly, Demar Derozan has been playing at an incredible level this past month. One of the big reasons for that is LaMarcus Aldridge has started to make three’s at a high rate. In the past 12 games, Aldridge has attempted 4.9 three’s per game. In the first 26 games, he only attempted 1.7 three’s per game. This new wrinkle to Aldridge’s game has given Derozan more space to work with on the floor and it has been a huge fantasy boost for him.

Since coming out of high school as the top player in the country, Porter has constantly battled injuries. It has been a long time, but it appears Porter has finally started to put things together and look like the star scouts raved about years ago. The past three games have been the best stretch of his career to this point. He averaged 16.7 points, 7.3 rebounds. 2 assists, 1.7 steals, 1 block and 38 fantasy points per game in the last three. His season averages are 6.7 points, 3.2 rebounds, 0.6 assists, 0.3 steals, 0.4 blocks and 13.4 fantasy points per game.

He is obviously a completely different player in the last three games and I believe this trend will continue. He is displaying the talent he has and when you combine that with the inconsistent perimeter scoring they have, he should continue to get a lot of chances to put up stats. He even has a good match-up, as the Wolves are 24th in fantasy points allowed to opposing small forwards. If you factor in the 1.85X multiplier to his average, it goes up to 70.3 fantasy points per game. With a good match-up and the recent trend, I expect him to come close to that number. Porter should be a lock in your lineup tonight.

With Karl Anthony Towns back, you would think he would start taking control of this top spot. However, Towns has struggled in his two games back only scoring 33.25 and 28 fantasy points. This is a concerningly low number where we need to see more from Towns before trusting him. That leaves us with the center with the most appealing match-up of the night and that is Nikola Vucevic.

Vucevic is facing the Hornets who give up the most fantasy points in the NBA to opposing centers, and are ranked 27th in the league in rebounding rate and defensive efficiency. Vucevic has reached the 60 fantasy point threshold three times this season and with this juicy match-up, I expect him to get in that area again tonight. With a multiplier of 1.15X, Vucevic is the best option for your lineup at center.

In my article breaking down this past Saturday’s slate, I mentioned how Ayton was getting undervalued due to his strange season of injury and suspension. When he did play he has been extremely consistent, scoring under 30 once and over 40 five times. He added another great fantasy night to list that night against Boston putting up 53.25 fantasy points. With his multiplier of 1.5X, that got him 79.9 fantasy points.

Even though his multiplier has gone down to 1.4X, I still think he presents a very high value at this number with his average at 40 fantasy points per game. With his consistent play, he feels like a very safe play at this point to get you in the high 50’s or low 60’s. Nobody else in this 2nd tier provides the consistency and value that Ayton does.

I chose Howard multiple times recently for this spot and it is well deserved due to the lack of competition he has and the numbers he has put up night after night with no Davis in the lineup. In the past six games, Howard averaged a double-double with 11 points, 12.3 rebounds, 1.8 blocks, and 34.6 fantasy points per game. Factor in the 1.7X multiplier and his average goes up to 58.8 fantasy points per game. He has also had two games where he has gone over 40 fantasy points, so he has the potential to land in the high 60’s. With Davis out again, there is no reason to not expect this type of performance again. As long as Davis is out, Howard is going to be the best you will be able to find in the bottom tier of centers.