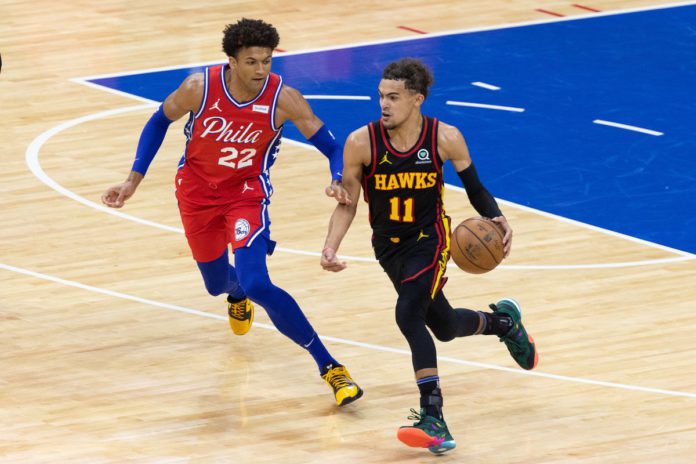 The 2nd round of the NBA Playoffs are in full swing! After a shocking Game 1 win, can Trae Young go off again and stun the basketball world with a Game 2 win? In the night cap, who can we expect to go off in Game 1 of Clippers/Jazz? Let’s get to our top picks!

Click here to join our $25 multi-entry NBA Fadeaway contest with $7,500 in guaranteed prizes!

Trae Young (1.15x) – With Young, we know we’re not getting a guy who fills out the peripheral stats exceptionally well (not a particularly high rate rebounder or defensive player). But he is an absolute beast in terms of shot-taking and distribution, his usage + assist rate this postseason is at a staggering 76.4% (that’s comparable to Russell Westbrook). With guys like Mitchell, Clarkson, and Bogdanovic priced pretty aggressively, some of these other Guards just don’t have quite the multiplier boost needed for them to separate from Young, the lowest multiplier Guard on the slate.

Paul George (1.2x) – We’ve been projecting George & Leonard similarly from a raw projection standpoint for much of the playoffs. Now that Leonard has been elevated to the 1.15x multiplier (while PG stays at 1.2x), our projections give a slight edge to George, although both project well. Pros in favor of Leonard: he has been a slightly better defender (BLK% + STL% has been +0.78% better than that of Paul George), has been  higher usage, has been a more efficient shooter this postseason. Pros in favor of George: takes more threes, free throws per shot attempt, better rebounder & distributor, and most notably has a better multiplier.

Rudy Gobert (1.2x) – It is going to be tough for alternate Centers to unseat Gobert as the top projected when he’s at the 1.2x multiplier. In Round 1, Gobert averaged a monster stat line: 13 rebounds, 3.2 blocks, 17.4 points. Embiid projects as the next closest Center, but at 1x he has to have a really big game to catch Gobert (barring a Gobert bust).