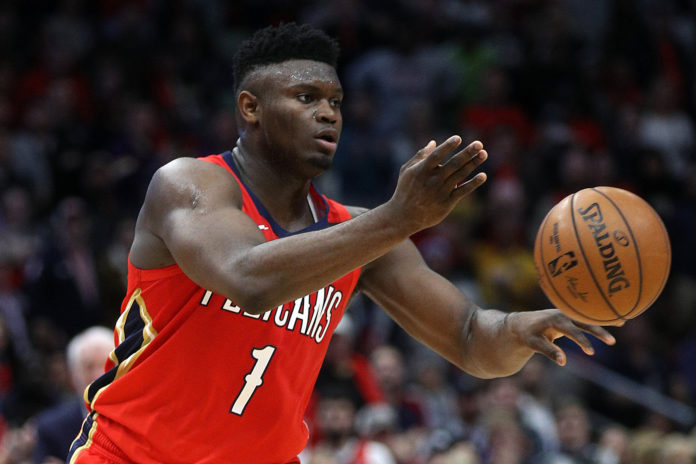 The NBA world is still buzzing after the long-awaited debut of Zion Williamson on Wednesday night. His 17-point explosion in the 4th quarter was arguably the most electric moment of the season to this date. He is back in action tonight against the Denver Nuggets as this is one of the 10 games on tap for this slate. Should Zion be in your SuperDraft lineup tonight? I answer that question and more as we get into my top picks for tonight!

The last four games have arguably been Harden’s worst stretch of the season. In that span, he averaged 46.1 fantasy points per game. A significant downgrade from his season average of 61.7. So why I am going with him here? Simply because I don’t think this type of play from Harden is going to last. He has scored 60 points or more 19 times this season and the last time he did it was against the Grizzlies on January 14th where he scored 62 fantasy points.

He is due to get back on track and the Timberwolves are a good candidate to give up a big game to Harden. Minnesota is ranked 22nd in the league in fantasy points allowed to opposing shooting guards. They are also 16th in defensive efficiency and give up the eighth-most free throw attempts to opponents. With Harden getting a solid chunk of his points at the line, this serves him well. The Beard has been a disappointment lately at 1X but don’t expect that to continue tonight.

After the bad injury luck Derrick Rose has had in his career, it is nice to see him playing solid basketball again. For the season, Rose is averaging 18.5 points, 5.9 assists and 31.7 fantasy points per game. He is even shooting the ball at an efficient 49% from the field. He has taken his play up a notch the past couple of weeks. In the past 13 games, he has scored 20 points or more 12 of them. In that span, he averaged 22.6 points, 5.8 assists and 36.4 fantasy points per game. He scored 40 or more fantasy points in that stretch five times.

With his opponent being the Grizzlies, I have confidence he can get in that range again. The Grizzlies are ranked 22nd in defensive efficiency and they give up the fourth-most fantasy points in the league to opposing point guards. With his multiplier of 1.5X, you should expect Rose to get you 60 or more fantasy points tonight.

This tier is typically hunting for the guy for big potential or who will get a boost of minutes because of injuries. We are referencing the latter when it comes to Herro’s value. With Kendrick Nunn and Goran Dragic questionable to play in this game, it is reasonable to expect Herro to step up to handle more of the scoring load.

While Dragic was out for a nine-game stretch this season, Herro had five games where he scored 30 fantasy points or more. Herro is a very aggressive player who will not shy away from shooting. In those games, he averaged 17 shot attempts and 36 fantasy points per game. With those averages coming in more than half the games Dragic was out, it is reasonable to take the risk here. Ultimately, I would stay away from any guard in this tier for tonight, but Herro is the choice if you insist on taking a guy here.

After resting up against the Hawks on Wednesday, Leonard looks to continue is otherworldly-play over the last six games. In that stretch, he averaged 36 points, 6.5 rebounds, 4.3 assists, 2.8 steals, 1 block and 60.9 fantasy points per game. He is possibly playing the best basketball of his career right now and getting him at a value of 1.15X is straight thievery.

If you factor in the multiplier to his average, it puts him at an average of 70 points per game. He is facing a good Miami team that is ranked 13th in defensive efficiency, but the numbers are so ridiculous that the competition should not scare you away from Leonard. With the way he is rolling right now and the fact he is coming into this game with some rest, that should make Kawhi a lock in everyone’s lineup tonight.

Hayward looked like the Utah version of himself at the beginning of the season. In the first seven games, he averaged 20.3 points, 7.9 rebounds, 4.6 assists and 38.8 fantasy points per game. Unfortunately, he got injured and he has never been quite the same since then. In the past 19 games, he is averaging 14.9 points, 5.3 rebounds, 4.1 assists and 30.7 fantasy points per game. However, injury circumstances will give Hayward a chance to have a big fantasy night. Jayson Tatum will most likely be out and Jaylen Brown is questionable to play. In the one game Tatum has missed this season, Hayward put up 25 points, 7 rebounds, 1 assist, 2 steals and 39.75 fantasy points. This was on January 15th against Detroit.

In this game, Hayward’s usage rate was 25% which is the highest it has been in a single game since he has returned from injury. Hayward will be asked to do a lot more shot creation and he has shown that he can step up in that role. With his multiplier of 1.55X, I expect Hayward to hover around 60 fantasy points.

When it comes to players valued at 2X, it is very rare to find one appealing enough to snag a spot in your lineup. Well, this is a very rare case where a player valued at 2X is a borderline must-play. As mentioned before, Zion sent the NBA world into a frenzy on Wednesday when he racked up 22 points, 7 rebounds, 3 assists, 4 three-pointers and 32.25 fantasy points in just 18 minutes. With his multiplier of 2X, he scored 64.5 fantasy points for whoever got him on Wednesday.

The hype train with Zion can get a little excessive at times but, with what he did in his first game and in the preseason, it is understandable. I know preseason should be taken with a grain of salt but he averaged 23.3 points, 6.5 rebounds, 2.3 assists and 1.5 steals in the four games. He is obviously a risk with it being unknown how many minutes he will play but you don’t see this type of potential from a player valued at 2X. While he is sitting there at that multiplier value, you should take advantage.

When healthy, Towns has been the best fantasy center in the league. For the season, he is averaging 26.5 points, 10.9 rebounds, 4.3 assists, 1.1 blocks and 52.5 fantasy points per game. He got off to a slow start when he came back from injury in the first two games only scoring 33.25 and 28 fantasy points. He has returned to form in the last two games putting up 52.5 and 50.5 fantasy points.

Against a Rockets team that is ranked 15th in defensive efficiency and 16th in fantasy points allowed to opposing centers, I expect Towns to land around his average of 52.5. With his multiplier of 1.15X, this kicks his average up to 60.4 fantasy points per game. With Town’s strong rebounding and great outside/inside game, he is a very safe pick when healthy.

I have been beating the Deandre Ayton drum for quite a bit now as he continues to present terrific value. He scored 25 fantasy points against the Pacers on Wednesday and that was only the 2nd time in 14 games he has scored less than 33.75 fantasy points. His season averages of 17.6 points, 11.9 rebounds and 1.5 blocks per game put him at 41.8 fantasy points per game.

He is facing off against a Spurs team that he played four days ago and put up 25 points, 12 rebounds, 2 assists, 1 block, 1 steal and 49.5 fantasy points. With how consistent Ayton has been this season, I do not see any reason why he could not put up that type of performance again. If you keep getting Ayton at a multiplier in the 1.4X-1.45X range, he should always be heavily considered.

Just like with the guards, this pick is very reliant on injury to another player. In this case, Enes Kanter will be out for the Celtics so Theis will be getting the lion-share of the minutes at center. On top of the injury to Kanter, Theis has been playing very well of late. In the last five games, he averaged 10.4 points, 5.6 rebounds, 2.8 assists, 1.2 steals, 2 blocks and 31.4 fantasy points per game.

With his extended minutes, he will have even more chances to snag rebounds and block shots. If you factor in his multiplier to the 31.4 average, his average goes up to 53.4 fantasy points per game. This is not even including the fact that he had to share minutes with Kanter in these games. Theis is a solid candidate to get around 60 points with Kanter sitting.