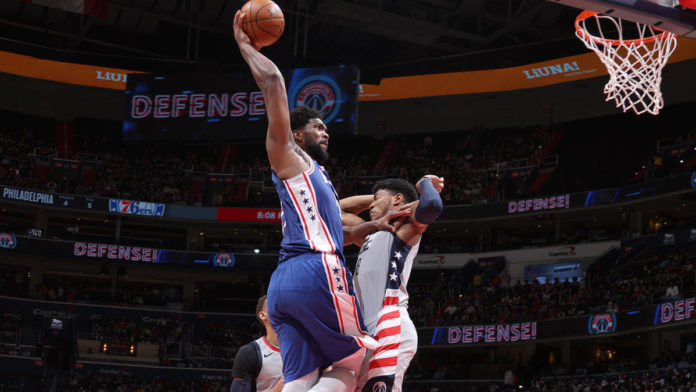 It’s a small slate tonight with only two Playoff Games on the schedule. The 76ers look to finish the sweep against the Wizards and Memphis/Utah continue to battle it out in the West’s 1-8 matchup. Even with a small slate, you still have a ton of great choices for your lineup, so let’s see what players Advanced Sports Analytics are projecting to have a big night!

Mike Conley (1.25x) – Donovan Mitchell is back and playing big minutes, which inevitably cuts into Conley’s volume (his usage & assist rates have been down a bit over past two games, both of which Mitchell played in). But you have to be excited about Conley’s efficiency with Mitchell in the lineup, his offensive rating in the last two games has been North of 150.

Russell Westbrook (1x) – He’s at the multiplier floor, but the role is too good to pass up for Westbrook. The next most expensive player is Embiid, while he has a similar per-possession role as Westbrook, he’s projected to play 20% fewer minutes.

Joel Embiid (1.05x) – That being said, we’re still pretty high on Embiid as a Forward, as the position is pretty thin. His usage & offensive efficiency have been great through three games, while he doesn’t play a ton of minutes for someone at his multiplier, the short slate makes him a perfectly viable option.

Daniel Gafford (1.75x) – On a short slate, and a playoff slate where rotations are pretty tight, there aren’t many high-multiplier options to take a flyer on. Gafford is our preferred high-multiplier option, he seems locked into a role around 20 minutes, and can be hyper productive in those minutes as a scorer, rebounder, and defender.

Rudy Gobert (1.25x) – Gobert has been a machine through three games against Memphis. He has double-doubled and had 3+ blocks in every game, stat categories that are rewarded heavily under the SuperDraft scoring system.

Jonas Valanciunas (1.35x) – Valanciunas is a Gobert-lite: he isn’t as productive on the defensive end and doesn’t have quite as much double-double equity as Gobert (but he’s still got good odds to hit 10+ rebounds & points). The extra 0.1x multiplier offers some relief, but our model prefers Gobert even at 1.25x compared to JVal’s 1.35x multiplier. You’ll have to pick one or the other for cash, but consider some exposure to Valanciunas in tournament sets.