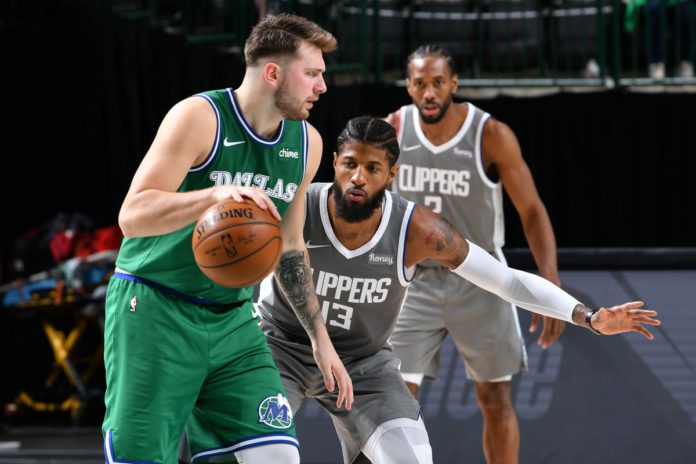 Between Kyrie heading back to Boston, The Clippers on the ropes vs Dallas, and another game of a super fun Knicks-Hawks series, we are for a great night of playoff basketball! It’s a slate full of action and our partners over at Advanced Sports Analytics have some ideas on who you should play and who you should fade!

Click here to entire our $25 multi-entry NBA Fadeaway Contest with $7,500 in guaranteed prizes!

Luka Doncic (1x) – Through two games Luka’s role has been about what we’ve come to expect: minutes in the high 30s (with access to a low 40s ceiling), and the offensive usage rate that saw him lead the league in the category during the regular season. There aren’t any exciting nuggets in Luka’s projection, we’re simply looking at a player who is doing it all for his team. Similarly priced players like Durant & Kyrie just don’t have the same massive workload that we can project for Luka.

Kawhi Leonard (1.2x) – Kawhi has been super productive through two games in the series, averaging 41 minutes, 21.5 field goal attempts, 8 rebounds, 4.5 assists, 3 steals, and 9.5 field goal attempts per game. He is simply doing too many things well to be ignored at 1.2x. The only paths to failure are either a massively inefficient game, foul trouble, or an unexpected change in role for Kawhi.

Clint Capela (1.25x) – Capela is an interesting option tonight that will be a test of short versus long form. Capela has been great on the boards & protecting the rim through two games; no surprises there. What has been surprising is his limited offensive role – his 10.8% & 7.5% Game 1 & Game 2 respective usage rates have been some of his lowest marks on the season. If he is strategically being phased out of the offense by either Atlanta or New York, it is tough to imagine hitting value. But if these are just bad variance marks and Capela is able to assert himself in Game 3, he could be a strong option that goes overlooked due to recency bias.