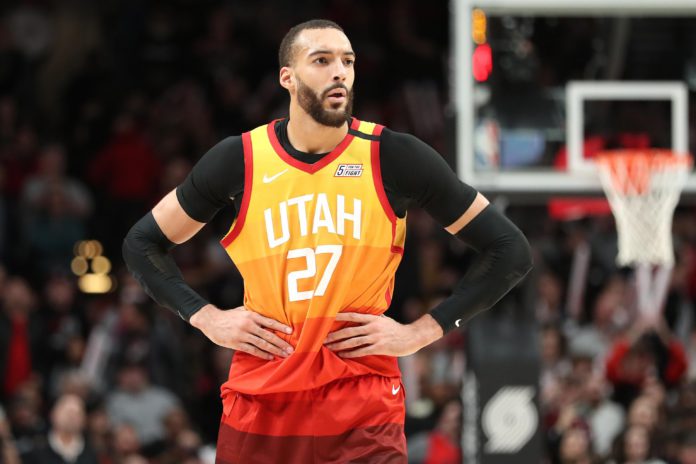 We are back to recap the best low-owned NBA stars on SuperDraft from this past week. These are the players from last week who were 10% owned or lower and put up monster performances to swing the results of the slate. A little disclaimer here: Jazz fans you are going to love what you are about to see. Don’t get too excited though as you are still not a real title contender. Anyway, let’s start out with the Utah Jazz’s starting center.

Gobert got a lot of heat for the massive contract extension he was given this off-season but he, along with the Jazz, have silenced those critics this season. Gobert is averaging 13.6 points, 14.1 rebounds and 2.7 blocks per game for a Jazz team that is now 15-4 on the season. It is really amazing how many people faded Gobert in this game vs Dallas given the way he was playing leading up to that match-up.

It should be clear now to everyone that Gobert should be highly owned nearly every night. In the last 8 games, Gobert averaged 16.3 points, 15 rebounds, 2.9 blocks and 47.4 FPPG. For context, Anthony Davis is averaging 47.3 FPPG for the season. If Gobert is in this multiplier range, do not miss your chance to snag great value.

It really stinks that Deandre Hunter got hurt in the Hawks’ last game vs Washington. He was having a great start to his second season averaging 17.2 points and 5.4 rebounds per game while shooting 51% from the field. He followed up this 33-point performance with a 22-point performance and 21-point performance. Hunter is on the rise as a scorer. The real story here though is the Milwaukee Bucks’ ability to guard small forwards.

If you follow the NBA closely, this is not surprising. The Bucks defensive scheme is designed to allow many three-pointers while allowing nothing at the rim. The Bucks allow the 3rd most made three-pointers per game and allow the 2nd fewest points in the paint. If you see a wing in the next draft group who is playing the Bucks, can score the ball and shoot well from three, put him in your lineup, and ask questions later.

Memphis Grizzlies Mike Conley has officially been re-born in Utah. During Utah’s 11-game winning streak, Conley has averaged 16.5 points, 6.7 assists, 2 steals, and 37.08 FPPG. With the 1.55X multiplier he had on 1/29, his FPPG average goes up to 57.5. This is a level of consistency you can rely on going forward.

What was even more impressive about Conley’s performance is he put up these stats against a Dallas Mavs team that can limit point guards from putting up big performances. In points, assists, rebounds, steals, and fantasy points allowed to opposing point guards per game, the Mavs are ranked 3rd, 6th, 5th, 6th, and 1st respectively. If Conley gets to play a team that has trouble stopping point guards such as Portland, Sacramento, or Washington, be ready to take advantage.

Surprised these players were low-owned? Let us know in the comments!