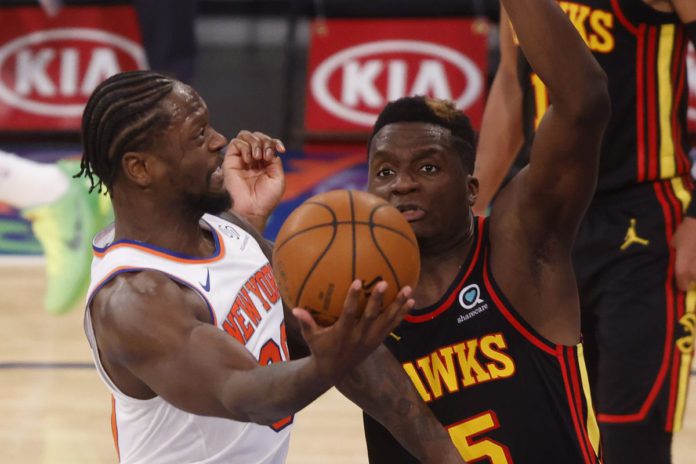 Trae Young had the Madison Square Garden shook in Game 1. With the Knicks facing a 1-0 deficit, there’s sure to be an ELECTRIC atmosphere in Game 2. Let’s take a took at some plays and fades in this crucial Game 2!

Clint Capela (1.25x // 1.9x) – It isn’t a slate where you have to go with low multipliers in bulk. There is a particular low-multiplier flyer (see below) that is a borderline lock, guys like Barrett, Burks, or Rose could provide a bunch of value for the Knicks, and if Nerlens Noel is out Taj Gibson feels tough to fade. With Trae & Randle at 1.05x & 1x respectively, the multiplier is just a little juicier for Capela who is an elite rebounder, a good shot blocker, and can score in his own right. His offensive role can be a bit spiky, but his median outcome should be around 10 makeable (alley oops & 2nd chance shots) field goal attempts.

Bogdan Bogdanovic (2.4x // 3.6x) – Bogdanovic is lockable at this multiplier. He’ll get 30+ minutes (and could log minutes up to the high 30s), he is the second scoring option within this Atlanta offense (he & Collins take similar shot attemps but Bogdan’s skew 3-pointer heavy), is a non-zero rebounder, distributor, and defender. He could have a cold shooting night, but it is hard to see massive failure for Bogdanovic at 2.4x/3.6x.

Immanuel Quickley (2.2x // 3.3x) – Playoff Champion mode forces us to make some tough player pool cuts. There are only about 15 guys who will play significant minutes, if we’re building multiple lineups we have to make stands for and against some players. Quickley feels more like a fade than a heavy consideration. Thibs has leaned heavily on Derrick Rose lately (he’s been awesome), Payton is still absorbing some minutes to start each half, so Quickley can’t project for much more than 20 minutes or so. He is a decent but not great distributor, and offers little value as a rebounder or defender. He would have to shoot at high volume & efficiency to burn faders.