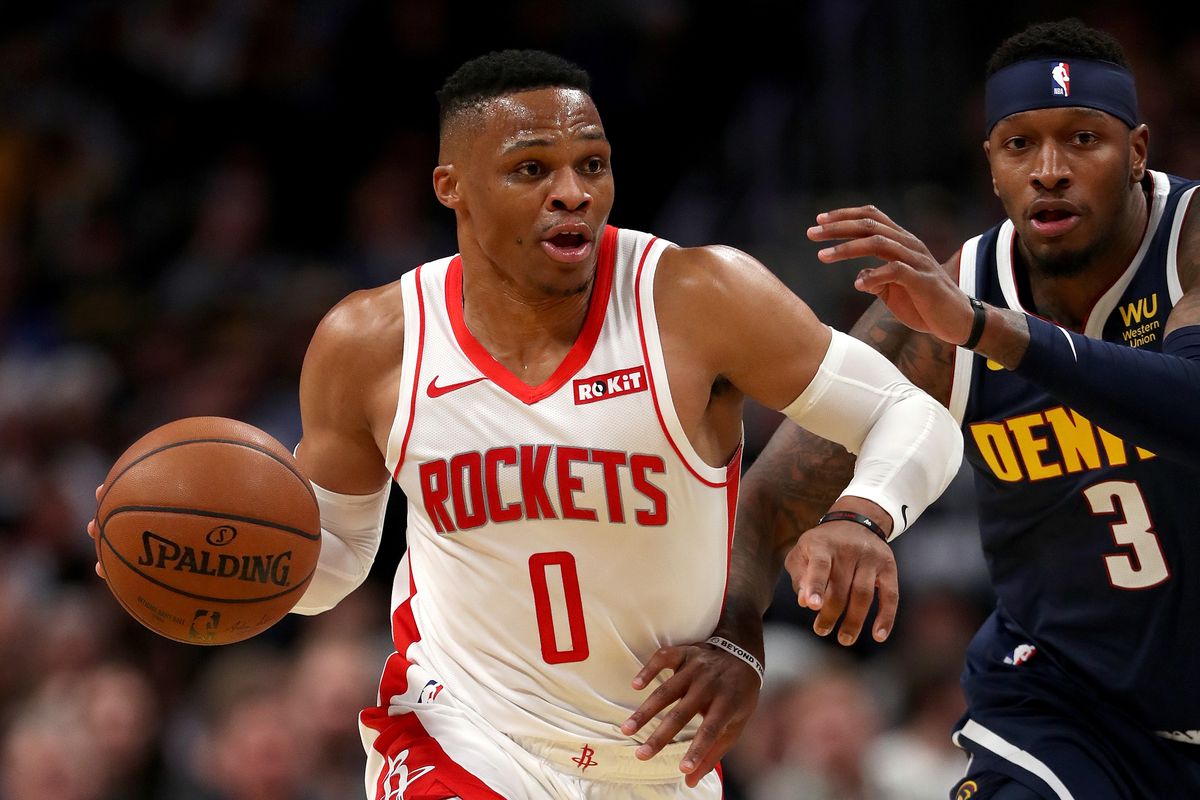 With the NFL taking a week off before the Big Game, this will be the first time since August where there will be no football to watch on a Sunday. With that being the case, the focus now shifts to the NBA. We are offering a special single-game slate today that features two of the five best teams in the western conference in the Nuggets and Rockets. Both teams consist of superstar talent while also having great depth behind the stars. I will help you narrow down the choices so you can win big today! First, I will select my champion for this slate.

Make sure you make your lineup for our $500 And-1 contest!

It has been an up and down season for Westbrook during his first year in Houston but there is nobody in the league hotter fantasy-wise right now than him. In his past six games, he has averaged 33.5 points, 9.8 assists, 9.8 rebounds, 2.2 steals and 66 fantasy points per game. He is playing like the MVP-version of himself where he is an absolute wrecking ball on the court in every aspect of the game.

This is as easy a choice you are going to get at champion with Westbrook valued at 1.9X and with the way he is playing right now. If you factor in his multiplier to the six-game run, he averaged an inhuman 125.5 fantasy points per game. Nothing else really matters when considering this decision. If a player is rolling the way Westbrook is right now, you just have to ride him until he cools down.

While Westbrook is playing out of his mind, Harden, in the very same stretch as Westbrook, has had his worst stretch of the season. In the past six games, Harden averaged 26 points, 6 assists, 6.3 rebounds and 46.2 fantasy points per game. It feels like we are living in some bizarro world where Harden and Westbrook have switched bodies. Considering the fact that Harden has a 1X multiplier in every game, it has been a rough stretch for him. However, it is just too dangerous to fade him in a single game contest like this.

Even during this cold stretch, Harden is still averaging 36.1 points, 6.2 rebounds, 7.3 assists, 1.6 steals and 61.3 fantasy points per game for the season. With a player of Harden’s caliber, who has been as consistent as any star in the league, it is hard to fade him just because he is cold. That could change in an instant where he all of sudden drops 70 fantasy points. If we were talking about his value in full slate, it would be a different story. In a single game contest, it is not worth betting against Harden.

With this recent stretch of hot shooting and Gordon having a track record of shooting the ball well in Houston, it is fair to expect him to land in the 30’s for fantasy points. If he does get in that range, he will score 75-97.5 fantasy points when you include his 2.5X multiplier. With Jamal Murray out, none of the other Denver guards have the appeal of Gordon at 2.5X.

After going with all Rockets for my guard picks, I am turning the tables with the frontcourt. I will start off with Jokic who was getting criticized early in the season for not being in shape. Those conversations are a thing of the past as he has been playing at a first-team All-NBA level the past 10 games. In that stretch, he averaged 24.7 points, 10.8 rebounds, 6.5 assists, 1.4 steals and 53.3 fantasy points per game. He has only had one game in that time below 40 fantasy points.

He should be able to take advantage of Clint Capela in the low post which will result in buckets for him and his teammates. In addition to that, with Murray out with an ankle injury, the offense is going to be running through him all of the time. In the past five games Murray has been out, Jokic’s usage rate was 29.5%. In the rest of the games in which both Murray and Jokic played, the Joker’s usage rate dropped to 26.2%. With Murray out a while, Jokic is going to have all of the opportunities in the world to put up fantasy points. With his multiplier being 1.55X, this is an easy choice.

Zion Williamson is the high school prodigy getting all of the attention right now but don’t sleep on what Michael Porter Jr. has been doing lately. The former #1 overall player in high school has dealt with injuries most of his career and now he is starting to put things together with the Nuggets. For the first time in his career, he has played 20 or more minutes in five straight games and you can expect that streak to continue. In these past five games, he averaged 16.4 points, 10 rebounds, 2.2 assists, 1.4 steals and 39.9 fantasy points per game.

With Murray out, he has gotten the chance to show off his scoring ability and with Paul Millsap out, he has been able to clean up on the glass. He also has great length which has resulted in getting steals on the defensive end. The Nuggets have to be very excited about the potential Porter is showing here. Fantasy players should be just as excited because they get the chance to play him at a multiplier of 2.5X. If you factor in this multiplier to his five-game average, he averaged 99.8 fantasy points per game. He should be a lock for everyone’s lineup in this single game contest.