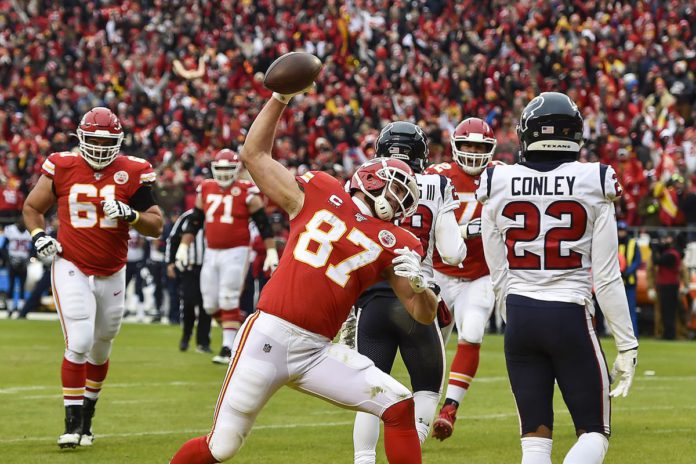 The NFL season is finally here! Things will open up Thursday night with the Houston Texans playing the defending world champion Kansas City Chiefs. In a normal world, we would have gotten to see the Chiefs reveal their first-ever Super Bowl banner in front of their raucous home crowd. Unfortunately, that will not be happening as there will be no fans in attendance for at least the first month of the NFL season. However, we will still get to watch two of the best quarterbacks in the NFL go head to head to kick things off in 2020! So which quarterback should get the nod for a spot in your champion mode lineup?

If you haven’t entered yet you should check out the NFL Hail Mary Contest that will be giving out $25,000 in total prizes with $5,000 going to first place!

With Deshaun Watson only at 1.15X, this is a pretty easy decision to make. We saw what Mahomes did to this defense last year in the playoffs. He threw for 321 yards with five touchdown passes and zero interceptions. When you put up numbers like this, it doesn’t matter if you have a 1X multiplier. There have also been barely any personnel changes on the Chiefs offense and the Texans defense since the last time they played. There was some concern about Travis Kelce being limited in practice this week but by all accounts, his status looks good for Thursday. I do not see a circumstance in which Mahomes doesn’t put up big numbers again in this game. This is especially the case given the Texans were ranked 29th in the NFL in fantasy points allowed to opposing quarterbacks.

There are more concerns on Watson’s end as he will be playing his first season in the league without superstar wideout DeAndre Hopkins. He still has a pretty good group of receivers with Will Fuller, Kenny Stills, and newly acquired weapons Brandin Cooks and Randall Cobb. The concern here is with no preseason games and shortened camp, you would expect the chemistry between Watson and Cooks/Cobb to take some time to develop. Mahomes is not only the better player, but he is in a better position to succeed than Watson is for Week 1.

There is quite a bit of hype surrounding Edwards-Helaire after the Chiefs selected the LSU product in the first round. With Damien Williams opting out of the season, he will be given full control of the running game right away. His stock should be high for the season and specifically for this game against the Texans. While I would expect the game plan for the Chiefs to be throwing the ball, for the most part, I still think Edwards-Helaire will be in situations to rack up fantasy points. I expect the Chiefs to move the ball pretty easily down the field and there will be chances for Edwards-Helaire to score touchdowns in the red zone. This could be a similar story to what happened last year in the playoff game. Damien Williams only got 12 carries but he ended up scoring two touchdowns because of the number of times the Chiefs found themselves in the red zone. On top of that, if Chiefs get up by a good amount of points, they will be happy to feed Edwards-Helaire and that will give him more chances to rack up yards.

David Johnson at 2.35X is on the other side of the coin where he most likely will be playing for a team that is down on the scoreboard. On top of that, Johnson is not the stud he was in 2016 anymore. He got hurt in 2017, in 2018 he ran for 940 yards and seven touchdowns on 3.6 yards per carry, and last season he ran 345 yards and two touchdowns on 3.7 yards per carry. Even with the juicer multiplier, I will still take Edwards-Helaire here.

I have finally gotten to a Texans player! So now with DeAndre Hopkins gone, all of sudden Will Fuller is the #1 receiver for the Texans. With a team that likes to pass as much as the Texans and the fact that Fuller is healthy right now, it seems like a steal to get him at 2.15X. With Cooks and Cobb new to the fold, you would think that Watson will be most comfortable looking for Fuller in this game. Fuller in the playoff game last year as the #2 option behind Hopkins, he caught five passes for 89 yards on eight targets. Hopkins caught 9 passes for 118 yards on 14 targets. Fuller might not put up those receptions and yards stats but I expect the targets to be around the 14 that Hopkins got in that playoff game.

Combine the fact that he will be the #1 guy for Watson with Houston most likely being down on the scoreboard, this feels like a big fantasy day for Fuller. I feel so good about Fuller in this game, I would make him my champion at 3.25X.

Kelce is the only option here. He is a top-2 tight end in the NFL and I wouldn’t see any reason why he would be anything but that again this season. Last year, he had 97 catches for 1,229 yards and five touchdowns. He will be going up against a Texans team that was ranked 24th in fantasy points allowed to tight ends and Kelce made them look like that last year in the playoffs. He put up 10 catches for 134 yards and three touchdowns in the Chiefs’ playoff victory over Houston and was by far the best skill player on the field that day.