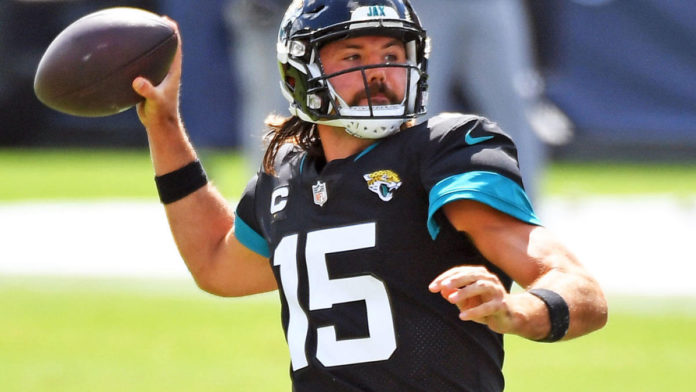 Last week on Thursday Night Football we had the battle of Ohio. This week we have the AFC battle of Florida between the Miami Dolphins and Jacksonville Jaguars. The expectations for these two teams were pretty low coming in but both have been surprisingly fun to watch. I expect this to be a hard-fought game that will ultimately be worth everyone’s time. The offenses should put up a lot of points which will make the game fun from a DFS perspective. Both teams boast a quarterback with a gunslinger mentality. Which one should get the spot in your champion mode lineup?

If you haven’t entered yet you should check out the NFL Hail Mary Contest that will be giving out $18,000 in total prizes with $2,500 going to first place!

It is the year 2020 and somehow Fitzmagic is not dead yet. He had a rough start to the season throwing three interceptions against the Patriots but bounced back in a big way Week 2 vs the Bills. He threw for 328 yards and two touchdowns while putting up 27.32 fantasy points. He also gets to face a Jaguars defense that just got lit up by Ryan Tannehill who threw for 239 yards and four touchdowns against them last week. I don’t think it is crazy to have an expectation for Fitzpatrick to put up similar numbers. He has a Pro-Bowl receiver in DeVante Parker and an emerging tight end in Mike Gesicki to throw to as well. With a poor running game at their disposal, Fitzpatrick will be given many chances to put up numbers.

On the other side, Gardner Minshew has had two impressive weeks to start the season. He put up 20.82 fantasy points in Week 1 against the Colts and 27.46 fantasy points last week against the Titans. He has been one of the better fantasy quarterbacks in the league. The reason he doesn’t get the edge over Fitzpatrick here is the multiplier difference. Minshew is at 1.15X which is a pretty big difference from Fitzpatrick’s 1.55X multiplier and I feel like they will put up similar numbers.

Robinson is the choice by default here. The Miami Dolphins have good names with Jordan Howard (1.75X) and Matt Brieda (2.25X) but both are not the feature back and have not had success so far this year. In the first two weeks, Breida has 59 yards rushing and Howard has 11 yards rushing. On the other hand, James Robinson has taken over as the clear #1 running back for Jacksonville with Leonard Fournette now in Tampa Bay. In week 1, he ran the ball 16 times for 62 yards, and then this past week against Tennessee he had 16 carries for 102 yards and 1 touchdown.

There has been nothing to suggest anything changing this week as it relates to the workload of Robinson, Breida and Howard. With Robinson’s multiplier at 2X, there is no doubt that he provides the best value at running back in this game.

There was an unfortunate amount of injuries in Week 2 that has altered the fantasy stock of several players. Keelan Cole is right at the top of the list of them. He would usually be the #3 receiver in the Jaguars offense behind DJ Chark and Dede Westbrook. But with those guys both hurt, he has a chance to really shine on Thursday night. Even if they are short-handed at receiver, it still feels like Jacksonville will want to throw the ball a decent amount with how well Minshew has played and how bad Miami’s pass defense has been. This will open up many opportunities for Cole as potentially the #1 option.

What is even more encouraging for Cole is what he has done so far this year as the #2 option behind DJ Chark. In Week 1 against the Colts, he caught 5 passes for 47 yards and 1 touchdown. In Week 2 against Tennessee, he caught six passes for 58 yards and 1 touchdown. You would think with him being the #1 guy, he will have a chance to put up even better numbers this week. This is great value to get a 2.1X and I feel so good about him that I would make him my champion at 3.15X.

Gesicki put himself on the map a little bit last year when he caught 51 passes for 570 yards and five touchdowns. He should now be on everyone’s radar after his terrific performance last week against the Bills. Gesicki had a career day catching eight passes for 130 yards and 1 touchdown which came out to be 25 fantasy points. He is trending in the direction of being one of the better tight ends in the league. I think we are going to see that trend continue on Thursday night against the Jaguars. With DeVante Parker not playing last week, he ended up being the #1 guy in Miami’s offense. With Parker questionable, he has the potential to be the true #1 option in this offense and be targeted like a star tight end.

On top of all of these targets he should get, he gets to play against a Jaguars defense that has given up the third-most fantasy points in the league to opposing tight ends. As mentioned before, Miami’s running game has been putrid to start the season. I expect them to lean on the passing game on Thursday night and Gesicki will be a huge part of that attack. He along with Keelan Cole should be locked into all of your champion mode lineups.