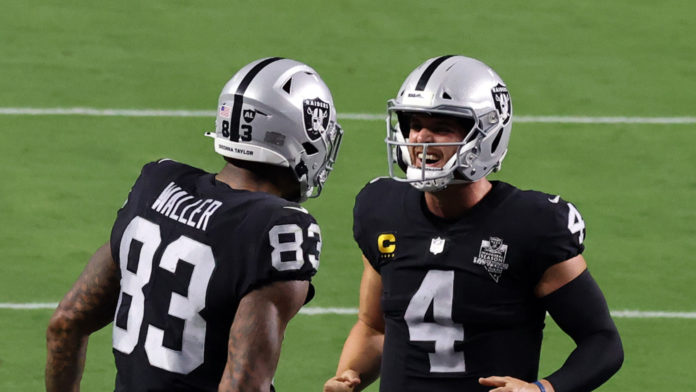 Even though 2020’s version of Thanksgiving was not the same as it usually is, there was still NFL action on and we saw some dynamite performances. Deshaun Watson led the Texans to a 41-25 win over the Lions while throwing for 318 yards, four touchdowns, and racking up 35.12 FP. On the late slate, Antonio Gibson was the headliner for Washington’s 41-16 win over the Cowboys. The rookie ran for 115 yards, three touchdowns, and put up 36.1 FP. So what should we expect to see on Sunday? I would expect to see a lot of silver and black.

What is even more encouraging about Carr’s performance this season as it relates to this week, is the fact that he has only played one defense that is in the bottom five in FP allowed to opposing quarterbacks. That team is the Buffalo Bills who have allowed the 5th most fantasy points to the opposing quarterbacks. In that game, Carr put up 311 yards, 2 touchdowns, and 22.44 fantasy points. Factor in his 1.45X multiplier he is carrying this week, that number goes up to 32.54. This week Carr gets to face off against the Falcons who have given up the most fantasy points to opposing quarterbacks in the NFL. After a solid 22.6 FP performance against the Chiefs, Carr is poised to have a big game this week and provide fantastic value at 1.45X.

Other players I like at the position: Justin Herbert (1.2X), Teddy Bridgewater(1.5X)

It is hard to pick a player who has a multiplier value of 1X as the top player to pick at a certain position but the stars aligned this week for Dalvin Cook to be that guy. The rest of the field is not as appealing and Cook has an extremely favorable match-up. Cook has been fantastic all year putting up 1069 yards and 13 touchdowns in just nine games making him an MVP candidate. Cook has been even better against the porous run defenses in the NFL. Cook has faced the Packers, Lions, and Texans who are the three teams that have given up the most fantasy points to opposing running backs. In those games, Cook put up 49.60 FP against the Packers, 40.2 FP against the Lions, and 29.6 FP against the Texans. His average stat line over those three games was 28 touches, 208 total yards, and two touchdowns.

Cook this week will get to face off against the Carolina Panthers who have given up the 5th most fantasy points per game to opposing running backs. I see no reason why Cook cannot have the same type of success in this game that he has had against the other bad run defenses he has faced. In addition to that, they will get to face a Panthers team that has Teddy Bridgewater starting after missing a couple of weeks due to injury. Even though there is no extra juice provided at 1X, Cook will still make it worthwhile having him in your lineup.

With the recent performance of the Raiders and the fact they are facing the Falcons, I am selecting Nelson Agholor as my top receiver pick for Week 12 alongside Derek Carr. Agholor gets a bad rap for his time in Philadelphia as the fans there always focus on his drops instead of the fact that he put up solid numbers. He had two seasons where he had over 700 yards receiving and he had 9 catches for 84 yards in the Eagles Super Bowl victory over the Patriots in 2017.

After a slow start with the Raiders, he has been a really solid option for Carr the last eight games. If you take out the Browns game where there was a severe wind storm in Cleveland, he averaged 11.27 FPPG in the other seven games. If you factor in his 1.7X multiplier, that average goes up to 19.16 FPPG. Even more impressive about these numbers, is the fact that Agholor has not faced a team in the bottom 10 in FP allowed to opposing wide receivers. Now that he gets to face a Falcons team that has given up the 2nd most, he has a chance to have a big day and be a huge hit for you at 1.7X.

Other players I like at the position: Keenan Allen(1.05X) Robby Anderson (1.4X)

We are continuing with our Raider theme as Darren Waller is the guy you should be going with at tight end this week. Waller is the 2nd highest scoring tight end in the draft group at 11.2 FPPG only trailing Travis Kelce who is at 17.1 FPPG. While that is a pretty big gap in production, Waller gets to have a 1.3X multiplier boost while Kelce is at 1X. That alone makes Waller a great option given the scarcity at tight end in the rest of the draft group.

What makes Waller even more appealing is like his teammates Carr and Agholor, he gets to face a bad Atlanta Falcons defense. The Falcons have given up the most FPPG to tight ends in the NFL as they have allowed them to accumulate 57 catches for 622 yards, and eight touchdowns in 10 games. I could easily see Waller getting his first multi-touchdown game this week and being the tight end in the most winning lineups on SuperDraft.

Other players I like at the position: Travis Kelce(1X) Hunter Henry (1.55X)