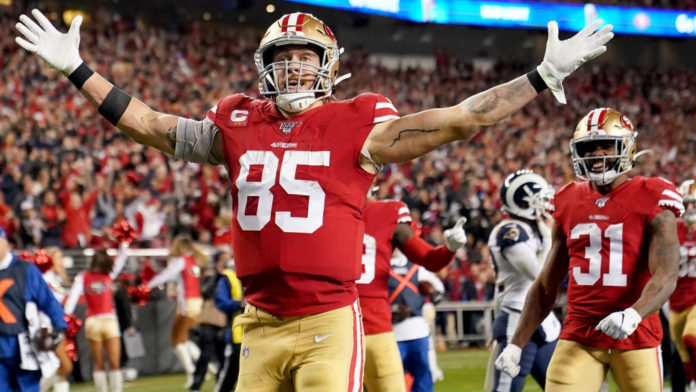 Although most offenses were stagnated, last week’s Wildcard round was one of the most entertaining slates in recent memory. Having the highest-scoring team put up 26 points is not ideal for fantasy purposes, but this is a new week.

Out of the four games on this slate, only one matchup is a rematch from the regular season. With six teams going to war with each other for the first time this year, this weekend will most definitely be wilder than the Wildcard round.

Have you heard of SuperDraft? We offer users the opportunity to draft their team with absolutely no limits by using our unique Multiplier method. Enter the NFL $20,000 Red Zone with a chance to win big and claim your spot on the leaderboards!

I’m not sure that I have to explain this pick but I will anyway. Lamar Jackson has not had a game with under 20 fantasy points (FP) since week five where he had 14.44 FP against the Pittsburgh Steelers. A lot of that had to do with his three interceptions, but Jackson has only thrown one in 239 pass attempts since then while throwing 25 touchdowns.

In a four-game slate, it will be hard to pass on the MVP-favorite Jackson who has accounted for 13 total touchdowns in his last four contests. Don’t pass on a man that has had eight games with 30+ points on SuperDraft.

This is more of a personal pick for me because my cousin told me that if Jimmy Garoppolo ever won a Super Bowl he would shoot a Crow out of the sky and eat it. He is now a vegetarian, so this would make for great content. I won’t hold him to it, but I like my chances in the hands of Jimmy-G.

If Garoppolo had his current multiplier in games against NFC playoff teams he would average 27.2 FPPG. Going up against Xavier Rhodes and the poor Vikings secondary at home puts him in a great spot this week where he has more than half of his yards and touchdowns.

The weather in Green Bay for Sunday’s game is both favorable to the Packers and the run. This paves the way for a clear Aaron Jones ceiling-type performance at home where he has scored 11 of his 18 total touchdowns this season.

Jones does not need the snow to be productive, however, as the second-year running back has been running on everyone and anyone over the last month. In that span, Jones has averaged over 109 yards rushing per game while adding five touchdowns and eclipsing the 130-yard mark twice.

Even though Seattle’s defense has only allowed two opposing running backs to reach the century mark this year, they have allowed the third-most touchdowns on the ground (22) only behind the Panthers and the Jaguars. Despite his 1X multiplier, Jones could break the 35 point mark and find pay-dirt multiple times.

Although the matchup isn’t the best and the Vikings may trail for most of this game, Dalvin Cook’s usage should stay the same. In the three losses where Cook was healthy, he averaged over 23 touches per game which is more than enough to get value when you add his multiplier of 1.55X.

Cook is no stranger to producing against top rushing defenses as just last week he was able to scamper for 94 yards and two scores against a stout Saints squad. Be wary of the matchup but remember that you don’t find a stud like Cook in this range too often.

It makes all the sense in the world for the Texans to lean on Carlos Hyde in this game. In games where Hyde has run for over 100 yards, Houston is 3-0. One of those games happens to be the week-six matchup at these same Chiefs where he ran for 116 and a score.

Duke Johnson (1.85X) could also benefit from this matchup with a defense that has allowed over 128 yards rushing per game, but I like Hyde a little more in this one.

This week Tyreek Hill is a perfect example of a classic equation. Not y=mx+b but rather talent + matchup = production. Hill has had a down season by his standards and that has a lot to do with his midseason injury as well as Pat Mahomes’ injury, but he is poised for a big game at home against a Texan’s secondary that would have a hard time guarding me in KC jersey.

In their week-six battle, Hill managed to find the end zone twice while catching five of ten targets for 80 yards. The Houston secondary has only gotten worse since then allowing the fourth-most yards receiving and touchdowns this season.

Hill’s low multiplier mixed with his down year could make his ownership percentage plummet which makes him even more interested in this play.

Deebo Samuel has become one of the more exciting young receivers in the league and if you’ve ever noticed how he runs like a running back when he gets the ball, you’re not alone. Samuel has not only emerged as a highly-trusted receiver for the 49ers but he has excelled in his touches out of the backfield as well.

In addition to his 26 targets in the last five games, the rookie has nine carries which he has turned into 122 yards rushing with two touchdowns. He has shown that he is up for competition as well. In five games against playoff teams, he has either scored a touchdown or compiled over 100 yards receiving in four of them.

We all know that the Viking’s Xavier Rhodes has struggled this season, but here are some numbers to hammer home just how bad he has been. Rhodes ended the season ranked 116 out of 123 cornerbacks according to Pro Football Focus allowing four touchdowns in coverage and a 127.8 passer rating allowed when he was targeted.

Samuel should see plenty of work with Minnesota’s defense focused on George Kittle and Emmanuel Sanders.

When you get into this range of wide receivers it can be tough. Usually, it is a bunch of deep-ball guys that are boom or bust that are not heavily targeted. But, we could be in luck with Allen Lazard.

Lazard emerged as a reliable target in the absence of Davante Adams this season but only averaged 3.5 targets per game going into week 16. Over the last two weeks of the season, Lazard saw 8.5 targets on average catching over half of them and adding a touchdown.

In a multiplier tier riddled with low target guys, I want to take a chance on Lazard who has seen his targets rise at the end of the regular season. If his usage stays the same he could be a lineup changer.

As far as I’m concerned there is only one tight end in this slate you should be looking to roster. Although the Vikings have not been burned much by tight ends this season, they have not seen a tight end like George Kittle. Some have had success like Austin Hooper (9/77), Darren Waller (13/134) and Travis Kelce (7/62) but they have only allowed one touchdown to the position all season.

That changes this week as this beast of a human will play in his first career playoff game. In his last four games, Kittle has averaged 10 targets, over 7 catches and over 90 yards per game while finding the end zone twice. I expect Kittle to be the most owned player at his position in this slate due to his usage and his multiplier being higher than normal.