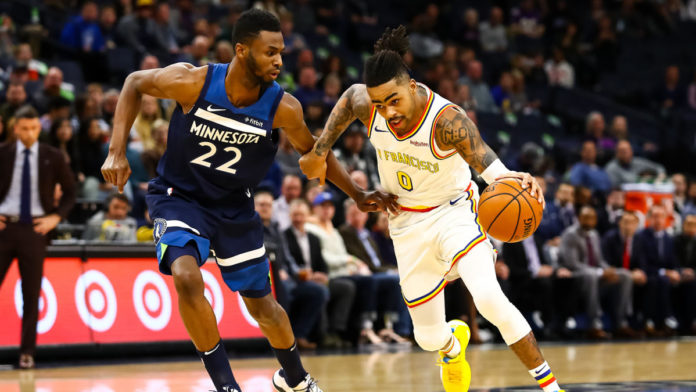 Like every season, the NBA trade deadline had a flurry of activity. The deals included Andre Drummond to the Cavs, Marcus Morris to the Clippers, D’Angelo Russell to the Timberwolves, Andrew Wiggins to the Warriors, and more! These mid-season moves not only have a significant impact on the playoff picture but it also impacts both the players being traded and, in some cases, players who were not even involved in the trades. Before you continue with our NBA contests on SuperDraft, take a look at which players’ stock went up and which players’ stock went down after the recent trades. Let’s start with the players who saw their stock go up.

It has been a wild ride for Russell as this will be his 3rd team in less than a year’s time. He was traded away from the Nets to the Warriors after the Nets landed Kyrie Irving and Kevin Durant. With the Warriors, he averaged 23.6 points, 6.2 assists, and 3.7 rebounds for a depleted team where he was asked to create all of the offense. With his move to Minnesota, not a lot changes as the Wolves are barren of ball-handlers. However, the one huge difference is he will get to play with Karl Anthony Towns.

Russell has never played with a dynamic big man like Towns who can do everything. Towns can roll to the rim and finish at the basket while also stepping behind the arc and hit 40% of his 3’s. You should expect a bump in Russell’s assists playing alongside a versatile star-like Towns instead of the poor talent he had around him in Golden State. In addition to that, you should expect Russell’s scoring to be close to the same as he will still be the main perimeter creator on offense.

While it certainly won’t result in winning basketball, Wiggins playing for this poor Warriors team will be big for him fantasy-wise. Not only is Russell off this team, but so are Alec Burks and Glenn Robinson who averaged 16.1 and 12.9 points per game respectively with the Warriors. The best offensive creators behind Wiggins now are Damion Lee and Jordan Poole. With this being the case, you should expect Wiggins to take an obscene amount of shots. This won’t lead to good efficiency but will present more opportunities for fantasy points.

Leaving Towns will be good for Wiggins fantasy-wise as well because his playmaking was never good enough to take advantage of Town’s skill set for assists. Towns was ultimately taking shots away from Wiggins. With Wiggins given the reigns to whatever he wants on offense, his value should go up.

We just talked about how Towns will help Russell’s value and you should expect that to go both ways. Even without a real point guard to set up Towns, he was still taking 8.1 three-pointers per game and hitting 40% of them. Now with a real point guard in Russell to create open looks for Towns, he has the potential to be even a better three-point shooter than he already is. The addition of Russell should not impact his post touches at all either so I would expect his scoring to increase. Combine that with his rebounding numbers probably staying the same, Towns has more value than he did before.

With Marcus Morris traded to the Clippers, it will be the Julius Randle show in New York City. Morris led the team in scoring at 19.8 points per game on 14.8 shots per game. Randle will now have the green light to be as aggressive as he would like to be. Randle for the season is averaging 18.9 points, 9.5 rebounds, and 3.2 assists. In the six games without Morris in the lineup, Randle averaged 24.3 points 8 rebounds, and 2.3 assists per game. As the sample size gets bigger, I would expect the rebound and assist averages to creep back up while it is fair to expect Randle to average in the mid-20s for points per game. With the Knicks not getting back anyway high volume shooters in the trade, Randle is going to be the focal point for the rest of the year in New York.

With Andre Drummond now in Cleveland, that is now 17.8 points, 15.8 rebounds, and 1.7 blocked shots being removed from the team. In addition to that, Blake Griffin is injured and out for a while. With those two guys missing, Morris and Wood will get increased chances to score more points and especially grab more rebounds as Drummond basically had all of the boards to himself.

I just mentioned above what Drummond’s numbers were this season. They are good enough to make him one of the best fantasy centers in the league. That is not going to stay that way in Cleveland. His 15.8 rebounds per game lead the league partially because there was no one else to grab boards. Christian Wood had the 2nd most rebounds per game for Detroit at 5.3.

He now goes to a Cavs team that has three strong rebounders. Kevin Love with 9.8 per game, Tristan Thompson with 10.4 per game, and Larry Nance with 7.3 per game. Drummond is no longer going to be the only guy on his team grabbing rebounds and that is going to really hurt his fantasy value. Everyone should be very hesitant to pick Drummond if he is in the multiplier range of 1.05X-1.25X.

While Thompson and Love will put a hurt into Drummond’s rebounding numbers, you can expect Drummond to hurt Love and Thompson’s numbers as well. Drummond’s entire game is based on being around the basket for lobs and rebounds as he has no jump shot at all. This is going to hurt Thompson more so than Love because he has the same skill set as Drummond. You cannot play those two guys together, so Thompson’s minutes should be cut down.

On the other hand, Love should still get a lot of minutes with his ability to space the floor. The damage to his numbers will be Drummond taking away some of his rebounds. While Drummond heading to Cleveland makes the Cavs a better team, it hurts everyone involved fantasy-wise.

The drop in Marcus Morris’ fantasy value is something you can see from a mile away. On the Knicks, he was the #1 scoring option on the team putting up 19.8 per game. Now with the Clippers, he is relegated to the 4th option at best behind Kawhi Leonard, Paul George, and Lou Williams. You should expect to see a huge cut in minutes and shot attempts for Morris. There is a chance we could see the Knicks version of Morris if Kawhi or George are sitting out but with everyone healthy, he is going to be playing a much smaller role than he was before. I would avoid Morris at all costs unless Leonard and/or George are out.

The situation here with Burks and Robinson is almost identical to what Marcus Morris will be going into. Burks and Robinson both got the chance to put up solid fantasy numbers on a brutal Warriors team. Burks averaged 16.1 points, 4.7 rebounds, and 3.1 assists per game with the Warriors. Robinson averaged 12.9 points and 4.7 rebounds per game. Now playing in Philly for a team with title aspirations, Robinson and Burks are expected to come off the bench and have much smaller roles. This team runs through Ben Simmons, Joel Embiid, Tobias Harris, and Al Horford. Robinson and Burks were both really nice value options in Golden State but now they do not have much fantasy value at all in smaller roles for a title contenders