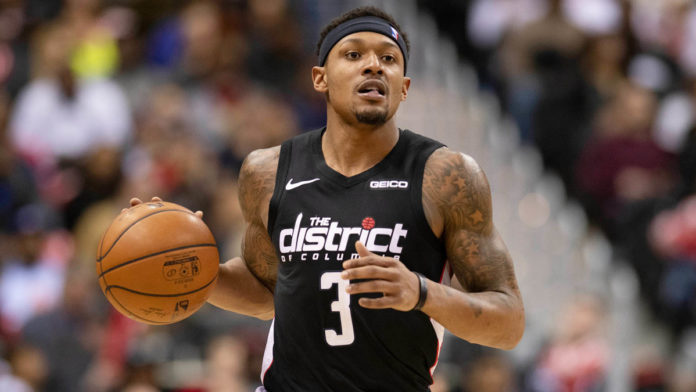 We are already in the month of February and one day away from the Super Bowl between the Chiefs and 49ers. Before you get ready to enter your SuperDraft lineups for the big game, you need to win some cash in tonight’s NBA contests! We got a seven-game slate that is highlighted by a premier matchup between the Celtics and Sixers. In addition to that, we have a player pool that is loaded with star-level guards. Which one of these guards should get the nod for your lineup tonight? Let’s get to it!

In a tier that includes Trae Young, Ben Simmons, Kyrie Irving and Damian Lillard, I am going with the biggest all-star snub in the eastern conference. It is incredible that Beal is not an all-star given the fact he is averaging 28.7 points, 4.5 rebounds, 6.4 assists, 1 steal and 45.6 fantasy points per game. It appears that this has motivated him as in his last game he put up 34 points, 9 assists, 9 rebounds and 61.75 fantasy points.

In his last five games, he has been on an absolute tear. He averaged 39 points, 6.8 assists, 4.6 rebounds and 56.9 fantasy points per game. With him not being selected to the all-star team, I expect his level of play to stay at this level for the foreseeable future. Given the fact that he is facing a Nets team that is mediocre defensively, he should find himself in the high 50’s or low 60’s for fantasy points again. Factor in his 1.25X multiplier, he could easily score between 71-78 fantasy points. Beal should be a lock to be in your lineup tonight.

Mitchell is coming off his second-worst fantasy performance of the season against the Nuggets where he put up 4 points, 5 rebounds, 8 assists and 18.25 fantasy points. This is very atypical for Mitchell as he has only scored below 20 FP twice and under 30 eight times in 47 games. After this dreadful performance, I fully expect him to bounce back against the Trail Blazers.

This is the second night of a back-to-back for the Blazers after playing the Lakers last night so they will not have the same energy they usually have. Even when they are rested, the Blazers are a weak defensive team. They are ranked 24th in defensive efficiency and give up the second-most fantasy points in the league to opposing point guards. This is perfectly set up for Mitchell to have a big night. In his first matchup with Portland, Mitchell racked up 35 points, 7 assists, 3 rebounds and 48.75 fantasy points. With this multiplier of 1.35X, Mitchell should easily climb into the 60’s tonight.

With Luka Doncic expected to miss a handful of games with an ankle injury, it will be an opportunity for a handful of the Dallas guards to step up. Jalen Brunson was the man who stepped up the first time Luka was out. Brunson in those five games averaged 31.4 minutes, 14.6 points, 9.2 assists, 5 rebounds and 35.9 fantasy points per game. An enormous jump from his season averages of 16.9 minutes, 7.6 points, 2.3 rebounds, 3.1 assists and 16.1 fantasy points per game.

When you factor in Brunson’s multiplier to the five-game average, he averaged 69.9 fantasy points per game. On top of that, he is facing the Hawks who are ranked 28th in defensive efficiency and have allowed the most fantasy points to opposing players. There is a chance Brunson can get overshadowed by Seth Curry, Delon Wright or JJ Barea, but he is the safest bet out of these guys. Given his multiplier, Brunson is a fantastic option tonight.

In a very emotional night at Staples Center last night, Davis played one of his best games of the season. He recorded 37 points, 15 rebounds, 6 assists, 5 blocks, 1 steal and 82.75 fantasy points. Despite this effort from Davis, the Lakers still lost to the Blazers 127-119. After this loss, the Lakers will be looking to turn the page quickly tonight vs the Kings and there is no one better to do that than Davis.

With this being a second night of back to back and the first game being a very emotionally draining one for Lebron James, Davis should be expected to shoulder most of the load tonight. Davis is averaging 53.4 fantasy points per game this season and tonight he should definitely exceed that total. With the loss last night and Lebron not in a position to be heavily relied on, Davis should continue to light up the box score.

With a very uninspiring group of players in the 1.7X-2X range tonight at Forward, I am going to select two players from this middle tier. Starting off with the guy who is the fourth-most reputable player on the Sixers. Harris doesn’t get as much attention as Simmons, Embiid or even Al Horford but he has been a solid offensive option for Philly this year. He is averaging 19.4 points, 6.8 rebounds, 3 assists and 35.9 fantasy points this season.

Harris is an interesting option tonight against a Celtics team that has struggled to defend Harris and the Sixers as a whole this season. Philly is 3-0 against Boston and Harris averaged 18 points, 10 rebounds, 4.7 assists and 44.2 fantasy points per game in those three games. If you factor in his multiplier to that average, he is averaging 64 fantasy points per game against the Celtics. With not much changed defensively for the Celtics, you can expect Harris to have another big game.

After doing nothing but winning for the Warriors the last five years, this season has certainly been a jarring change for Draymond Green. The Warriors have the worst record in the league at 10-39 and Green is only averaging 8.4 points, 6.3 rebounds, 5.9 assists and 30.5 fantasy points per game. A big reason for the low numbers is the Warriors are getting blown out so much that Green doesn’t play enough minutes to rack up fantasy points. However, in games in which he plays 30 minutes or more, the numbers improve. His averages go up to 10.3 points, 8.4 rebounds, 7.2 assists and 38.3 fantasy points per game.

Green, while surrounded by much worse teammates, still has found the ability to be a triple-double threat when he gets the minutes. With tonight’s match-up being against the lowly Cavs, this should definitely be a game where Green gets over 30 minutes of playing time. The Cavs are ranked 29th in both defensive efficiency and fantasy points allowed to opposing players. This has all the makings of Green putting up a vintage stat line where he gets over 40 fantasy points. If you factor in his 1.55X multiplier, that gets him in the 60’s.

The Celtics used to be Embiid’s kryptonite as they had two great options to guard him in Al Horford and Aron Baynes. With Baynes in Phoenix and Horford switching sides to Philly, Embiid has dominated Boston with whoever they tried to throw at him. It has either been Enes Kanter, Daniel Theis or Robert Williams. None of them stand a chance guarding Embiid down low. In the two games against the Celtics this year, he averaged 26.5 points, 13 rebounds, 4.5 assists, 2 blocks and 56.8 fantasy points per game.

As mentioned in the section discussing Tobias Harris, nothing has changed defensively for Boston. They still have no answer for Embiid and I fully expect him to have another monster game tonight against the Celtics. The fact you can get him at 1.1X instead of 1X makes him a great play tonight.

It has not been the easiest year for Porzingis as he’s needed to get adjusted to a new team after not playing basketball for over a year. The fit with Doncic was thought to be seamless but that hasn’t been the case as Porzingis has been more of a role player than a star this season. However, when Doncic has missed games, Porzingis has looked like the budding star he was in New York.

In the six games Doncic has missed this season, Porzingis averaged 24.5 points, 13.5 rebounds, 2.3 blocks, 1 steal and 54.1 fantasy points per game. This is Lebron James and Anthony Davis level of production. The big difference with those guys is they have a 1X multiplier while Porzingis is at a 1.4X. Factor in this multiplier to the six-game average and he is at 75.8 fantasy points per game. With the Mavs facing a dreadful Hawks defense, Porzingis should have a spot safely secured in your lineup tonight.

I have mentioned in previous articles how this tier for the center position is all about an injury to a starting level player. We saw Gorgui Dieng take advantage of his opportunity when Karl Anthony Towns was hurt and we are seeing that right now with Poeltl. Poeltl has taken full advantage of LaMarcus Aldridge’s injury to put up big fantasy numbers. On the season, he is averaging 17.6 minutes, 5.3 points, 5.7 rebounds, 1.9 assists, 1.6 blocks and 20.5 fantasy points. In the four games Aldridge has missed, he averaged 31.4 minutes, 8.5 points, 10.3 rebounds, 3 assists, 2 steals, 2.5 blocks and 35.6 fantasy points per game.

This is a much bigger jump than you typically see from a back-up center who gets more extended minutes as his average of FPPG is up 15.6. Factor in his multiplier of 1.8X, he has averaged 64.1 fantasy points per game with no Aldridge in the lineup. What makes Poeltl even more appealing tonight is the match-up with the Hornets. Charlotte is allowing the eighth-most fantasy points to opposing centers and they are ranked 26th in defensive efficiency. Poeltl has a chance to be a home run pick for you if you choose him as your center tonight.