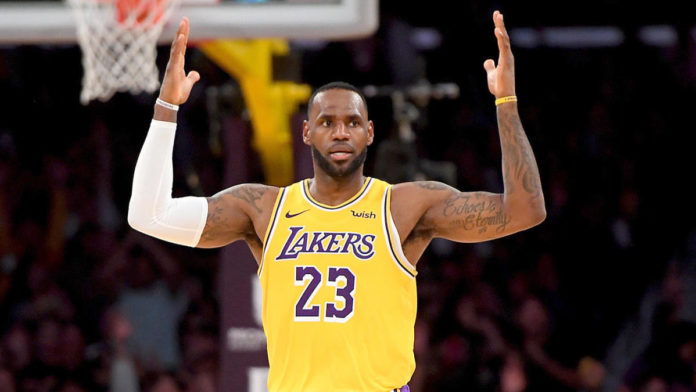 Looking to win some cash before a big weekend of football? Tonight is your chance at that as we got a 10 game NBA slate for you! The lineup possibilities are endless on SuperDraft with a slate this big. Here I am going to try to provide some assistance to narrow down your choices for your lineup tonight to make the decision-making process less daunting. Once you have taken the time to ponder my suggestions for each position, enter our NBA Daily Dime contest where we will be giving out $10,000 in cash prizes!

Trae Young has gotten some criticism this season from media members because his big numbers are not translating into wins. The Hawks are 8-30 but for SuperDraft that does not matter because he lights up the box score every night. This season he is averaging 29.2 points, 4.5 rebounds, 8.5 assists, 1.1 steals and 48.1 fantasy points per game. He is coming off his best game of the year against Houston where he put up 42 points, 13 rebounds, 10 assists, and 78.25 fantasy points.

Although the rebounding number is not something you can rely on, with this match-up against the Wizards, it is fair to expect Young to come close to 42 points and 10 assists. I have been consistently saying all year how bad the Wizards defense has been and that hasn’t changed. They are still last in the league in defensive efficiency and 2nd to last in fantasy points allowed. With this matchup, Young is a steal at 1.1X.

Expect that level of production to continue tonight as Williams and the Clippers will face the hapless 9-30 Warriors. It has been a tough season for the Warriors defensively as they are ranked 25th in the league in fantasy points allowed to point guards. They are also ranked 20th in the league in defensive efficiency. Williams went for 22 points, 8 assists, and 41.25 fantasy points in their first match-up and I would expect him to be in that range again. Add in his 1.6x multiplier, he is a great play for tonight.

This pick obviously hinges a lot on Bradley Beal’s availability as he is currently questionable for this game tonight. If he does not play, continue to ride the Jordan McRae train that is rolled on in Beal’s absence. In the past 7 games in which Beal has missed 6 of them, McRae is averaging 19.7 points, 4.9 rebounds. 2.9 assists, 1 steal, 1 block, and 35.7 points per game. It has been a little inconsistent for him as he has had two games where he only scored 18.5 and he has in three other games he scored 44.24, 50.25, and 58.

With the matchup against the Atlanta Hawks, there is a good chance for another explosive fantasy night from McRae. The Hawks are last in the league in fantasy points per game allowed and 27th in the league in defensive efficiency. While Young will be lighting up the Wizards’ poor defense on one end of the court you can expect McRae to be doing the same on the other side. If McRae can get in the range of 40-50 fantasy points at 1.7X, he will be a huge boost to your lineup.

This is a pretty rare time where Giannis is in the slate and I am fading him for someone else. Lebron is almost never a bad choice but with the circumstances, he has in his favor, he is a must-play tonight. His running mate Anthony Davis took a hard fall in their previous game and he is questionable tonight. Even if Davis does play, I would be surprised if Lebron doesn’t take on more responsibility. Obviously, if Davis doesn’t play, that will force Lebron to be very aggressive and put up big numbers.

On top of that, Lebron has enjoyed success in games against Dallas this season. In the three games vs Dallas this season, Lebron has averaged 25.7 points, 9 rebounds, 12.3 assists, 3.3 steals and 64.9 fantasy points per game. Especially with Davis out or limited, you should expect him to be in the 60s again. The fact you can get him at a 1.05X multiplier makes him a steal.

It is very rare that you will see Kawhi Leonard as a 2nd tier player. Everyone should take advantage of it while it is there. Leonard is averaging 25.3 points, 7.6 rebounds, 5.1 assists, 1.8 steals and 47.4 fantasy points per game. If you factor in the 1.35X multiplier he is averaging 64 fantasy points per game which is by far the biggest in the tier.

Based on his opponent and the days off he has had, I do not see any reason why he can get to his average at the very least. As mentioned when discussing Lou Williams, the Warriors are a weak defensive team that should not give Leonard any troubles. On top of that, Leonard has not played in a game since January 5th. As we all know, load management is crucial for Kawhi and with all of this rest, he should fresh and ready to go tonight. Leonard at a 1.35X multiplier is as good of a value as you will see.

It has been a tough season for Kuzma as he has had to adjust to the life coming off the bench for a team with Lebron James and Anthony Davis. He is averaging 12 points, 3.6 rebounds and a measly 19.3 fantasy points per game. However, with Davis possibly out or limited tonight, this could be an opportunity for Kuzma to shine.

Kuzma has played in two games this season in which either Davis or Lebron was out. In those two games, he is averaging 19 points, 4.5 rebounds, 1 assist, and 28.6 fantasy points per game. His usage rate in those two games is 30.8% which is a decent-sized jump from his season average of 23.1. This an opportunity for Kuzma to score the ball at a high rate and provide solid fantasy value at 1.8X. If he hits his average of 28.6, his points per game total goes up to 51.4 when factoring in the multiplier.

Vucevic has had a great season this year. He is averaging 18.6 points, 11.2 rebounds, 3.4 assists, 1 block and 43.5 fantasy points per game. Now with Jonathan Isaac injured, he has taken his game to another level. In the six games Isaac has missed, Vucevic has bumped up his averages to 20.3 points, 14.5 rebounds, 4.2 assists, 1.3 blocks and 50.1 fantasy points per game. With Isaac out, the Magic has had to rely on Vucevic to score and create more and he now has all of the space down low to haul down rebounds. Vucevic with the 1.25X multiplier factored in, he is averaging 62.6 fantasy points per game. Considering the fact that Phoenix is starting a center who is a defensive liability in Deandre Ayton, Vucevic is a great play.

Bertans’ status is still in question for the game against Atlanta, but if he plays he is a great value pick at the center. Bertans was on an absolute tear before he got hurt on 12/21. This was a direct result of the injury to Thomas Bryant. Before Bertans got hurt, his last 10 games he played in without Bryant he was averaging 19.3 points, 5.8 rebounds, 1.6 assists, and 35.2 fantasy points per game. Before that, in 18 games Bertans was averaging 13.2 points, 4.4 rebounds, 1.8 assists, and less than 29.1 fantasy points per game.

Take in the fact Atlanta has a brutal defense and that Bradley Beal’s status is in question, Bertans could definitely score in the range of 35-45 fantasy points. If you include his multiplier of 1.6x, he will be in the range of 56-72 point range.

There are not too many great bottoms of the barrel center options on most nights. The only exception is when an injury is involved and that is what we have here. As we discussed with Lebron and Kuzma above, Davis potentially being out can have big implications. Howard will definitely get a minute’s increase and we have already seen in two games Davis has missed this season Howard can take advantage.