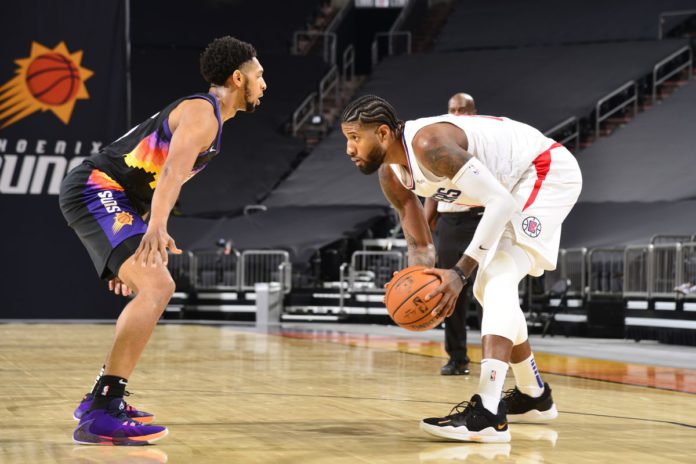 Tonight we got a great western conference match-up between the Suns and Clippers! This game starts at 10pm ET on ESPN and you can follow our lineup while watching the game. Before we get into the best plays in this match-up, you can read everything about the strategy of NBA Champion mode contests HERE.

Paul George (1.35x // 2.05x) –  With Kawhi Leonard doubtful, Paul George figures to be the primary offensive player yet again for the Clippers. This type of spot has made George a tough fade in the past, we expect that to be the case again tonight. In the 17 games that Leonard has missed & PG13 has played over the past 2 years, George has averaged a nearly 8% higher usage rate, which has led to an average of 0.27 more fantasy points per minute, and 6.11 more fantasy points per game.

DeAndre Ayton (1.65x // 2.5x) – Ayton’s play and role has been on the rise of late. At points earlier this spring Ayton was far from a lock to get 30+ minutes, that hasn’t been the case as of late. He has also been a productive rebounder as of late, and his block metrics have been great, he’s had a block in 13 of his last 15 games, opposed to earlier this year when he seemed about about 50% chance to get blanked in the block column.

DeMarcus Cousins (2.15x // 3.25x) – Cousins simply can’t be projected for enough minutes to pay off his 2.15/3.25x multiplier. Since arriving in LA, he’s played more than 16 minutes only once, the Clippers’ most recent blowout loss to New Orleans. If this game stays remotely competitive (the spread suggests it is likely to) there are few paths to Cousins being relevant.