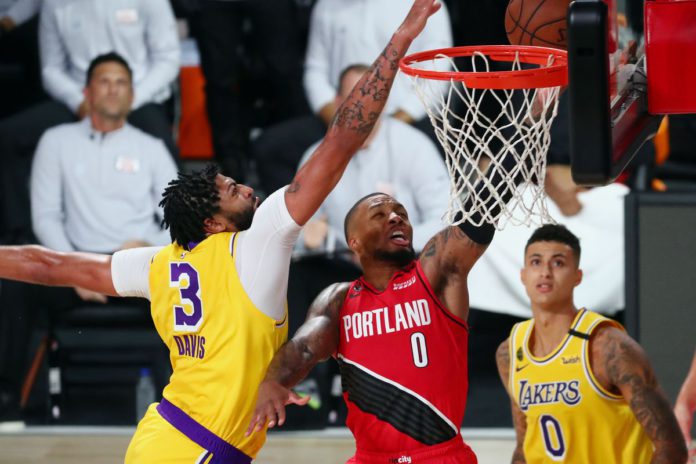 We have a HUGE game tonight between the Lakers and Blazers with playoff seeding on the line. This game starts at 10pm ET and will be broadcasted nationally on ESPN so have yourself a relaxing Friday night with a hint of sweat by putting a lineup in for our single game contests! First though you will need to see our picks and projections so you can see your lineup rise to the top! Read a guide on how to play in a NBA Champion mode contest HERE.

C.J. McCollum (1.5x // 2.25x) – Our projections aren’t super high on any of the low-multiplier players on either side. In salaried formats you are encouraged to take some shots on top-tier players, but with the multiplier format if the stars don’t have big games there are paths to lineups of high-multiplier role players being tournament viable. Tonight could be one of those nights with the value that exists on the LA side (due to LeBron injury) and the loose pricing on some Portland secondary players. But if you are going to take a shot on a low-multiplier star, McCollum feels like the option with the best multiplier price.

He and Lillard are very similar from an underlying metrics standpoint. Both get minutes in the low to mid 30s, both with good but not elite usage, both do a little bit of everything (assisting, rebounding, defense, limiting turnovers, three point scoring). So if given the choice between the two, we favor McCollum who has an extra 0.3x multiplication working in his favor.

Jusuf Nurkic (2x // 3x) – Nurkic is unlikely to play a ton of minutes, he has yet to play 30 minutes in a game since returning from injury, his minutes can be volatile ranging from the low 20s to the high 20s. But he is extremely efficient per minute, can be expected to score anywhere from 1.5-to-2 fantasy points per minute. If he hits ceilings in minutes & per-minute efficiency at 2x or 3x he is in a great spot to be a tournament-winner.

Carmelo Anthony (2.2x // 3.3x) – Portland is expected to be fully healthy, so it is hard to project Anthony for much more than his usual role of minutes in the low 20s. Unlike Nurkic, Anthony’s per-minute efficiency leaves much to be desired, he’s usually a 1-point per minute fantasy player. As such, it is hard to project him for much more than 40-50 post-multiplier fantasy points, which is unlikely to get it done as a tournament-winning player.