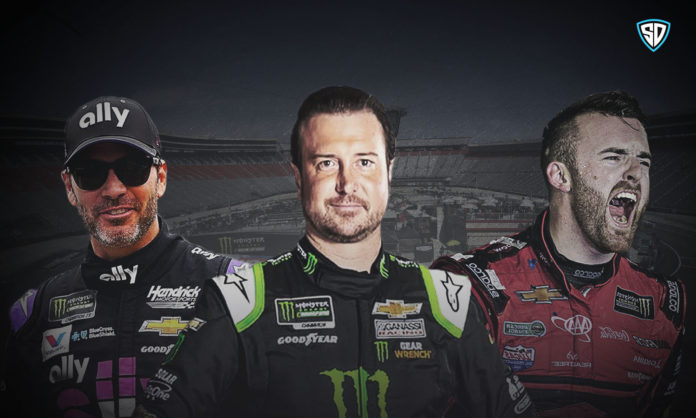 After the last two races were spent in Charlotte, the Nascar cup series moves to Tennessee for the 2020 Supermarket Heroes 500 at the Bristol Motor Speedway. Chase Elliot is coming off his first win of the year at Charlotte this past Wednesday and has odds of +450 to win this race. Is it worth snagging Elliot at 1.1X or are there better options to consider for the race at Bristol? Before we get into it, here are scoring items to consider for playing Fantasy Nascar on SuperDraft:

He has been by far the most consistent racer this year as he has finished in the top 10 in all eight races this year. The 2nd most top 10 finishes are tied between five racers with only five top 10 finishes apiece. Harvick has led the most laps with 391 and has the best average finish number of 5.38. With his multiplier still at 1.2X, I see no reason to move away from him now.

After Jimmy Johnson had that disappointing disqualification at the Coca-Cola 600, I felt that he was going to respond well on Wednesday. Johnson certainly did that as he finished in 11th place at the Alsco Uniforms 500 with a place differential of 29 and a total of 74.5 fantasy points. When you include his 1.5X multiplier to the equation, he ends up with 111.8 fantasy points. Also if you take out that flukey disqualification, he has been one of the best racers on the track in the past four events. He has finished 11th, 12th, 7th, and 5th in his last four appearances minus the disqualification. In those four events, he averaged 68.15 fantasy points per event and when you factor in the 1.5X multiplier, the average goes up to 102.2 fantasy points per event.

If he did not get disqualified and was given the 2nd place finish, he would have two top-five finishes, four top 10 finishes, and six top 20 finishes. With Johnson still possessing that 1.5X multiplier, he should still get heavy consideration for your lineup.

Despite that slow start, Busch still has three top-five finishes, five top 10 finishes, and 6 top 20 finishes. He does not have the number of laps led stats as the other racers but he is right up there with the best of them when it comes to an average finish as he is ranked 5th in that category with a number of 12.13. Kurt Busch has not been getting the same respect as his brother Kyle from the bets makers but on SuperDraft, he certainly deserves that respect. The way he is going right now, you should feel good about inserting Kurt into your lineup.