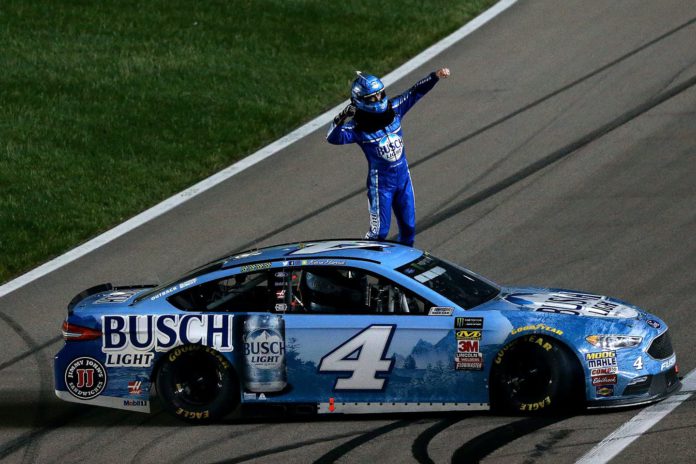 After securing his 2nd win of 2020 on Sunday, Kevin Harvick has clearly established himself as the best racer on the planet right now. He is in first place in the cup series standings with 421 points, a whopping 56 points ahead of 2nd place Chase Elliot. After his 113.70 point performance on SuperDraft on Sunday, his multiplier for Wednesday’s race at Martinsville Speedway has dropped to 1X for the first time. So now that Harvick is valued properly at 1X, does this mean you should fade him for Wednesday’s race? We address that issue along with our top picks for the 2020 Blue-Emu 500! First, take a look at rules and scoring pieces to consider when playing Nascar DFS on SuperDraft:

Before we get into the picks, let’s first get into why I will NOT be selecting Kevin Harvick. Even though Harvick is by far the most productive and consistent racer right now, the multiplier being at 1X is a big deal. The margin is not big enough between him and the others to take him at 1X over these drivers I am about to mention. Without further ado, let’s get into my picks!

Outside of Harvick, Keselowski has been as consistent as anyone in Nascar so far in 2020. He has two wins, four top-five finishes, seven top-10 finishes, and nine top-20 finishes. His average finish number is 9.40 which is the 2nd best number behind Harvick among all racers who have participated in all 10 races. He will also rack up fantasy points for you in the laps lead category as he has 346 laps led which is good for fourth-most. In his last five races, he has finished 9th, 1st, 7th, 1st, and 4th. In that time span, he averaged 85.59 fantasy points per event. When you factor in his multiplier of 1.2X, the average goes up to 102.7 fantasy points per event.

Keselowski has also had a ton of recent success at Martinsville speedway. In his last eight events at Martinsville, he has finished 3rd, 1st, 5th, 10th, 4th, 1st, 2nd, and 5th. He has been a lock to be in contention at this track for the past four years and the way he is racing now, I don’t see why that will change. Expect Keselowski to provide excellent value at 1.2X.

My value play of the week here belongs to the 44-year-old Jimmie Johnson. As I’ve talked about in the past few articles, Johnson’s 2020 resume gets tainted a bit by the disqualification he had in the Coca Cola 600. Aside from that, he has been one of the better racers of 2020. Not counting the disqualification, he has finished 7th, 3rd, 11th, 8th, 38th, 12th, 7th, and 5th in his last eight races. Over this span of time, he averaged 75.4 fantasy points per event and when you factor in the 1.4X multiplier the average goes up to 105.7 fantasy points per event. Considering the fact that the disqualification was largely flukey, this is an accurate representation of how well Johnson is racing right now.

The concern with Johnson is the lack of recent success at Martinsville. Johnson did win back in 2016, but since then he has finished 15th, 12th, 15th, 12th, 24th, and 38th. However, given how large his multiplier value is and how good he has been recently, I think selecting Johnson here is absolutely a risk worth taking.

Truex got off to a very slow start in 2020 as he did not finish in the top 10 in any of his first four races. Things have turned in a positive direction since then though as he’s finished 6th, 10th, 6th, 9th, 20th, and 3rd in his last six races. In that time span, Truex averaged 77.24 fantasy points per event, and with the multiplier of 1.2X factored in, that average goes up to 92.69 fantasy points per event. Truex has the 2nd best odds to win this race at +550.

Truex also has an excellent track record at Martinsville as he’s finished 1st, 8th, 3rd, 4th, and 2nd in his last five events at Martinsville. Combine that with the fact that he has turned things around recently, he should be a big boost for your lineup on Wednesday.