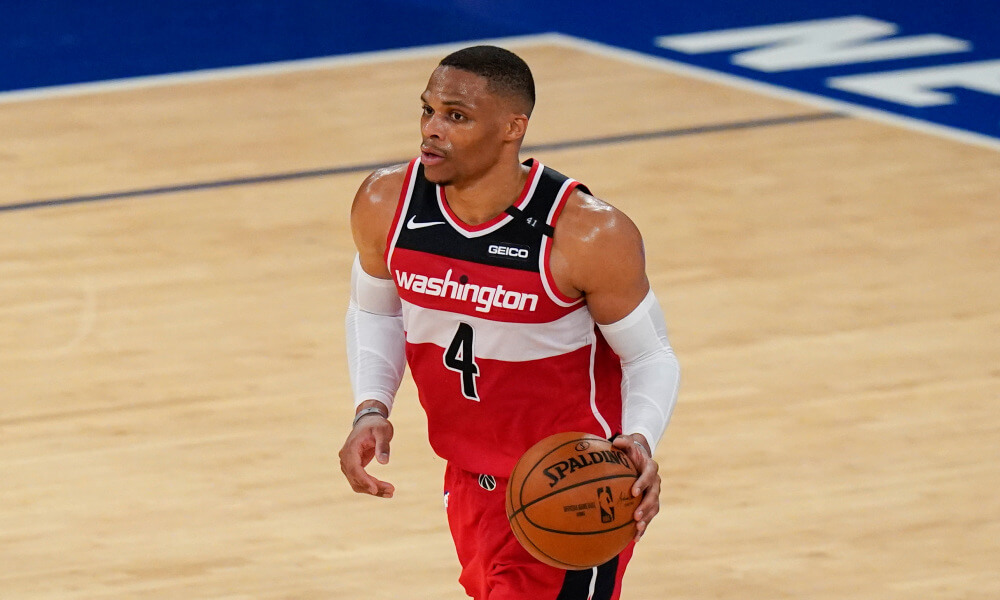 It appears to be a relatively light slate for injuries tonight, most of the key injuries for tonight are known as of yesterday. With these small-ish slates, the viability of low-multiplier plays for GPP purposes tends to increase, as they have fewer high-multiplier/high-volatility sleepers that they have to beat out to be one of the top performers at their position.

Russell Westbrook (1x) – Westbrook is one of those low-multiplier plays that we should feel good about tonight. It is a stellar game environment, OKC & Washington have been the two fastest teams on the slate over the last 30 days, both averaging more than 101 possessions per 48 minutes (no other team on the slate has averaged more than 100 over the past month). The Washington side is a bit more appealing as OKC’s defense has been pitiful. They are allowing the second best offensive rating to opponents on the slate (behind only Houston), couple that with their high pace and they are allowing the most points per game on the slate over the past month.

Paul George (1.25x) – We missed PG chalk night on Wednesday as he was ruled out late in the afternoon. But the same logic that applied then applies now:

With Kawhi Leonard out, PG13 is expected to be the primary scorer for the Clippers in a modestly high total/competitive game. In the 15 games that Kawhi Leonard has missed between the 2021 & 2020 season, George’s usage rate has been up 7.7%, which has yielded a 6.9 fantasy point delta for George in these games without Leonard.

Daniel Gafford (1.85x) – Gafford doesn’t get a ton of minutes, so you’re playing him for his per-minute efficiency & multiplier. But since joining the Wiz, Gafford has been awesome: he’s registered a 9.7% block rate (50% better than league leader Myles Turner) and an 18.3% rebound rate (roughly equivalent to Nikola Jokic). He’s a relatively high-usage & high-efficiency offensive player or a backup Center, since joining Washington he’s averaged a 22.5% usage rate (somewhere between Andre Drummond & Clint Capela) and a 129 offensive rating (Jokic-level per possession efficiency).

Jusuf Nurkic (1.65x) – Nurkic hasn’t quite been his usual high-rebounding self since returning from injury. But the minutes are there for him, he played 29 minutes (most minutes since returning from 2-month injury stint) on Wednesday. At 1.65x we just need some of his efficiency metrics to correct themselves & Nurkic should be a nice play.

Ja Morant (1.25x) – The game environment figures to be good for Morant, the 233 total is the highest on the slate. Morant just has somewhat underwhelming metrics for his multiplier. Take the past-month comparison of Morant to C.J. McCollum below, who is priced at 1.3x

McCollum has been playing more minutes, has higher true shooting percentage, does more defensively with higher block & steal rates, has a higher usage rate & offensive efficiency, and turns the ball over far less than Morant. At his 1.25x multiplier, there are simply better plays relative to their multiplier.

Moses Brown (1.35x) – In March we saw Moses Brown getting minutes in the high 20s or even low to mid 30s. But in April, Darius Bazley has returned from injury, recent acquisition Tony Bradley has been playing solid minutes at Center, and Brown’s minutes have come down to the mid-to-low 20s (and have been at 16.5 minutes in each of his last two games). With minutes concerns and Washington’s staunch defense (lowest offensive rating allowed over the last month on the slate), Brown feels unlikely to put up a big fantasy game.