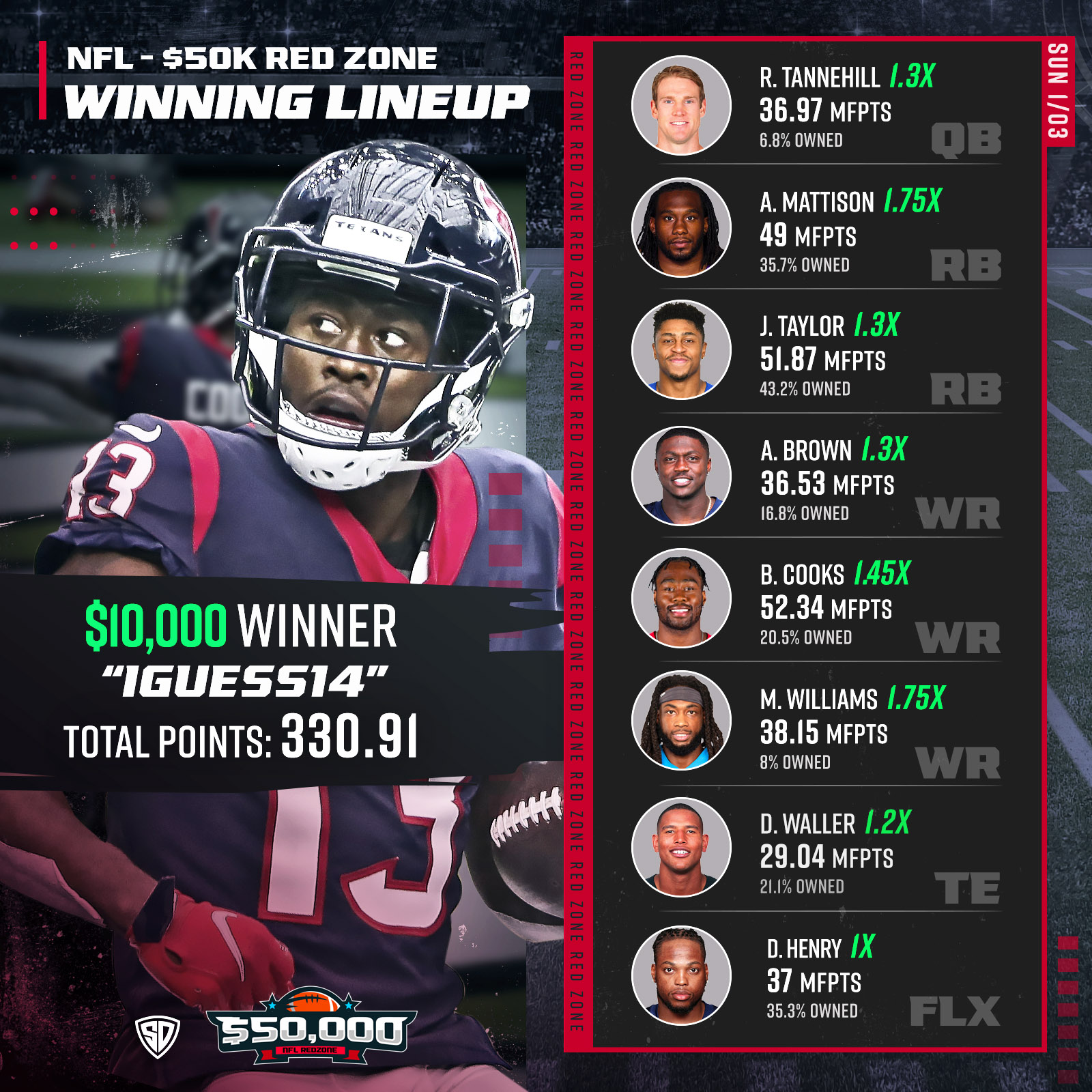 This is our first edition of the RedZone winning lineup recap and I couldn’t ask for a better story to start on. First off, congrats to iGuess14 who was able to take down the RedZone and take home $10,000…using ONLY 4 LINEUPS. Here is how he did it.

This lineup was built around a stack that involved some chalk and some relatively low-owned guys. The chalk comes from Derrick Henry at 1X which was a no-brainer on this slate and to a lesser degree, Brandin Cooks at 1.45X – the highest point-getter in this lineup. The combo of Ryan Tannehill and AJ Brown, both sporting a multiplier of 1.3X, were at 6.8% and 16.8% owned respectively. These two plays involved with this stack gave the lineup the right amount of parody it needed – oh, the stack also delivered with 162.84 SDPTS.

These four players combined for 7 non-passing touchdowns, 605 non-passing yards and three different yards bonuses. He clearly wanted to target this game because of the expected high point total and selected the guys that fit his game script. His selection to go with Tannehill over Deshaun Watson for this stack was the difference for him – an $8,000 difference if you add Watson to this stack.

100.87 SDPTS to be exact. Both Alexander Mattison and Jonathan Taylor were chalky plays carrying an ownership percentage of 35.7 and 43.2 respectively, but that doesn’t matter when you have parody in other places throughout the lineup. Chalk can come with a stigma at times but having good chalk is almost vital when playing SuperDraft and utilizing the multiplier format.

He was able to play the top two scoring running backs of the weekend – but that is only a portion of this lineup. He still had to deliver outside of his backs and his stack.

We’re only missing two players at this point – Darren Waller at 1.2X and Mike Williams at 1.75X (his second-lowest owned player at 8%). Williams was part of the difference in this lineup where most others had shares of Russell Gage and Justin Jefferson. The Williams pivot paid out big time in this lineup providing just over 38 SDPTS. Waller provided help as well as he was the highest scoring tight end on the slate scoring just over 29 SDPTS.

A Mix of Multipliers

This is a prime example of what SuperDraft brings to the table. With no restrictions on lineup building you can do whatever you want and have one of your four lineups take it down. Hats off to iGuess14 and one beauty of a lineup.