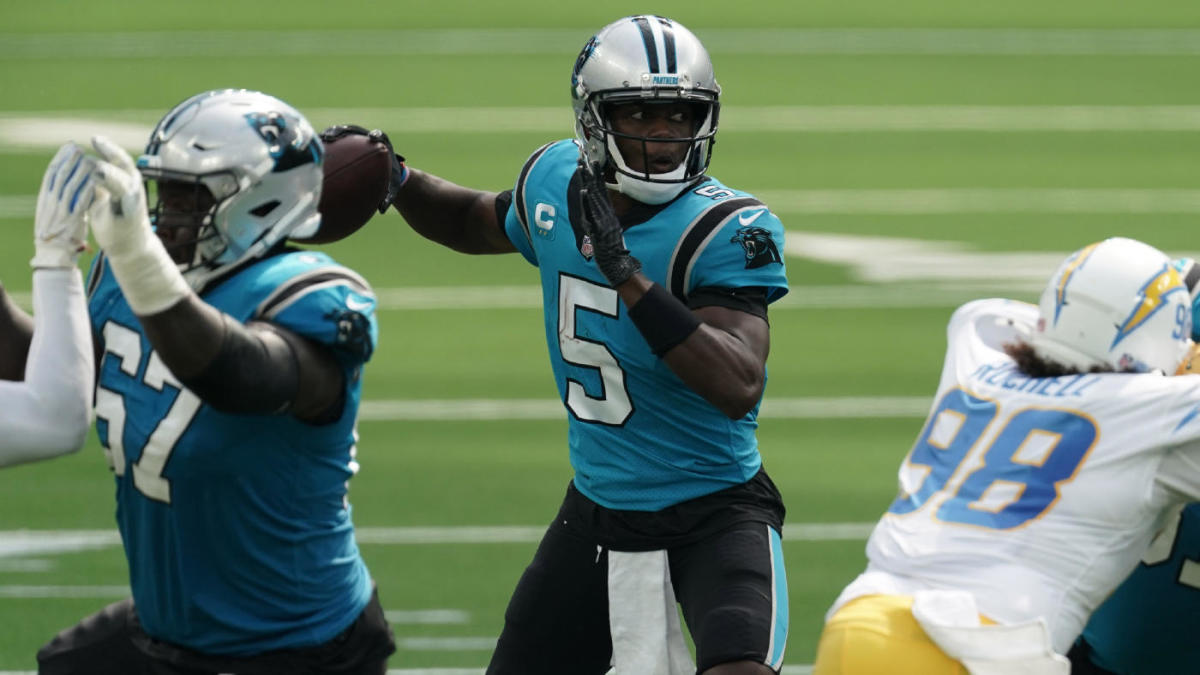 COVID-19 continues to be the big story surrounding the NFL. The Titans-Steelers and Patriots-Chiefs games were moved out of the main slate last week and the Titans-Bills and Patriots-Broncos games have been moved out this week. We can only hope that things will get under control and we won’t have games continue to be postponed. However, for the games that will be in the main slate on Sunday, there are still many options to choose from to build a great lineup.

There are not many quarterback values you are going to see better than Teddy Bridgewater at 1.7X for this week. Bridgewater is off to a decent start in Carolina with this past game against Arizona being his top game so far. He put up 276 yards passing, 32 yards rushing, and three total touchdowns for 27.24 fantasy points. Even though Mike Davis has played well in Christian Mccaffrey’s place, this offense is becoming more about the passing game. Bridgewater has solid options to throw to with DJ Moore, Robby Anderson, and Curtis Samuel.

What makes him so appealing for this week is the fact that he is going up against the Atlanta Falcons who arguably have the worst passing defense in the league. The Falcons have given up the most fantasy points to opposing quarterbacks in the league and there has been nothing to suggest it will get any better. Atlanta in four games has given up 1,415 yards and 16 total touchdowns to quarterbacks. They are on pace to allow 5,660 yards and 64 touchdowns to opposing quarterbacks. Bridgewater is poised for another big game and with that 1.7X multiplier, he should be a borderline lock this week.

Other players I like at the position: Kyle Allen (2X), Lamar Jackson(1.05X)

The rookie from LSU exploded onto the NFL scene on opening night against the Texans as he put up 138 yards, one touchdown, and 21.8 fantasy points. His stock has cooled a little bit as in the next three games he scored 10, 15.9, 10.6 fantasy points respectively. However, this week feels like the week where we will see the type of production he put up against the Texans in Week 1. The Texans have given up the 3rd most fantasy points in the league to opposing running backs. Only the Lions and Raiders have given up more. Who do the Chiefs happen to be playing this week? The Las Vegas Raiders! The Raiders have had a nice start to the season but they have gotten absolutely mauled in the running game. They have already given up 732 yards and 8 touchdowns to opposing running backs.

2020 has not been a good year for many people but it has certainly been a great year for Wide Receivers that changed teams in the offseason. DeAndre Hopkins and Stefon Diggs are the most notable but very quietly Robby Anderson has had a very good start to his first season in Carolina. Anderson averaged 14.6 fantasy points per game in his first four games this season and when you factor in his 1.5X multiplier, that goes up to 21.9 fantasy points per game. He has put up 114, 109, 55, and 99 yards respectively in the first four games. This level of consistency should earn your trust by putting Anderson in your lineup.

What is even better for Anderson this week is the fact he gets to play the Atlanta Falcons. As discussed before with Bridgewater, the Falcons are brutal defending the pass. The Falcons have given up the fourth-most yards to opposing wide receivers. On the other side of the ball, Matt Ryan and the Falcons can put up points so the Panthers will have to throw the ball to keep up. Everything is lined up for another big day for Anderson and you should be thrilled to snag him at 1.5X.

Ebron got off to a slow start for the Steelers in Week 1 as he only played in 63% of the snaps and he had one catch for 18 yards. However, in the next two games, he was fully established as Ben Roethlisberger’s starting tight end and he made a nice impact. In Week 2 vs Denver, he caught 3 passes for 43 yards, and then in Week 3 vs Houston, he caught 5 passes for 52 yards and a touchdown. He played in 77% and 75% of the offensive snaps in those two games respectively. It was only two years ago where Ebron had 750 yards and 13 touchdowns as a member of the Colts. With how Roethlisberger likes to use his tight ends, it is not crazy to think he could put up stats close to what he did that season.

I think we are going to see Ebron build on his performance from two weeks ago and have his best game as a Steeler this week. Ebron and the Steelers square off against the Philadelphia Eagles who have given up the 3rd most fantasy points in the NFL to opposing tight ends. Only the Saints and the Falcons have given up more. With this match-up and the 1.65X multiplier, I love Ebron to bring great value this week.

Other players I like at the position: Tyler Higbee(1.15X) Travis Kelce (1X)